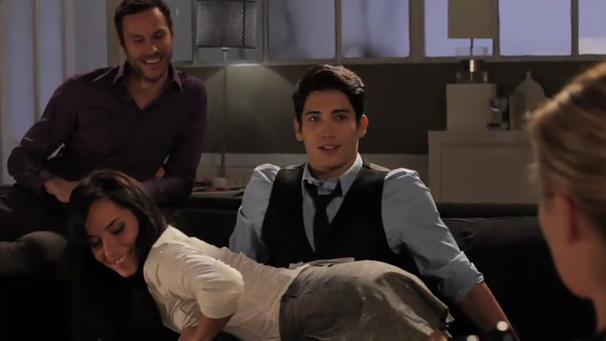 Umm...are we doing something wrong?

We Dare, Ubisoft’s risque title for the Wii, has been the center of controversy ever since its trailer debuted. This was mainly due to the ages 12 and up rating given by Pan Europe Game Information (PEGI), as the trailer suggested gameplay involving provocative actions such as spanking and showed the players of the game undressing. But if all the negative press the game has been getting wasn’t enough, now PEGI wants Ubisoft to pull its advertisement off the internet.

PEGI has stated that “the advertisement does not accurately reflect the nature and content of the product and it misleads consumers as to its true nature.” Ubisoft has three days to remove the ads and may face a fine if they don’t adhere to the demand.

I have to admit, I feel kind of bad for Ubisoft. There were no plans to release the game in the U.S., then they decided not to release it in the U.K. because of the reaction towards its rating, and now the company is being forced to pull their advertisements. In a previous article I wrote, I make it a point to mention that games aren’t only for kids. So, if Ubisoft wants to make a kinky adult-oriented game, they have the right to. However, if PEGI’s statement is true and Ubisoft really is misrepresenting the game, then I don’t quite feel as bad for them.

I guess we won’t know for sure until the game finally hits store shelves. But after this whole fiasco, where exactly is that going to be?