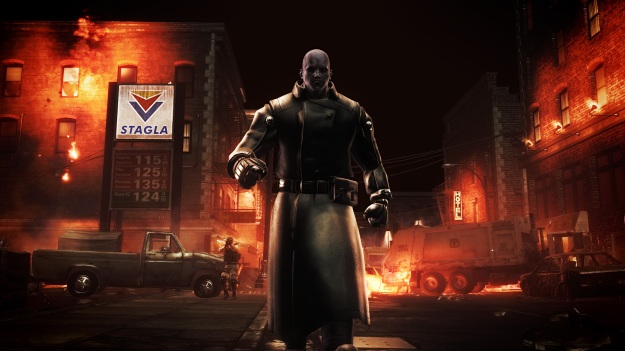 ORC is a slick, action packed game that gives players a sweet high resolution tour of Raccoon City. This, for all intents and purposes is your standard 3rd person shooter game, set in the Resident Evil universe. This is not canon, this is not what Resident Evil was, or the direction it has been headed in. THIS is simply a nice side story that will tide us fans over until the next release! Want a current, yet true Resident Evil canon game, please pick up Resident Evil Revelations!

In the meantime, is ORC perfect? NO! However, it is a fun romp back in the city that started it all- Raccoon City!

After the break, a full breakdown of my first impressions.

The controls are pretty smooth if you are used to third person shooters but sprinting can be a bit of a pain in the ass on Xbox, since it required pressing in the left stick. This is especially the case when you are forced to run away from enemies….which you will do a lot of! The lack of quick turns made evasion difficult and the cover system is not great….it’s your basic hump the wall to automatically crouch.

What I did appreciate is that there is not a separate items screen that is so prevalent in Resident Evil games. Everything you will ever need to access is all on the screen and within view at all times. Gone is the need to hit “start” or “Y button” to see if you have enough first aid spray.

Extremely dark and not in a good way

The early missions in ORC begin with an Umbrella HQ update that feels as if it is straight out of the Resident Evil films. The music is also arranged in a way that sounds like a hybridization of the first Resident Evil Marilyn Mason film score with hints of the Resident Evil 5 mercenaries music. The atmosphere is dark and brooding and it can sometimes hamper your ability to see very well, especially while you’re on the streets of Raccoon City. In terms of “feeling” and atmosphere, this game felt like a Resident Evil movie tie-in, than an actual Resident Evil game and that was rather underwhelming. Lupo could have easily been Alice and we could have called it a day.

The variety of enemies is nothing new and is actually your standard Resident Evil 1, 2 and 3 B.O.Ws. However, seeing them all in one screen can induce a shit panic in a pinch. Take the scene when the Hunters are dropped off in the city…You are dodging those Hunters, Zombies, Crimson head zombies, OH and  Spec Ops…Once you think the coast is clear…CUE BOSS FIGHT WITH NOT 1 BUT 2 MR. Xs! HOLY SHIT! This game never truly scared me but it did make me tense up several times.

Gaining experience points is key in ORC. Everything gives you XP-zombie kills, healing teammates, and even collecting data. This is great and allows you to upgrade everything from abilities to guns and more importantly, level up your character. Again, pretty standard and nothing groundbreaking about it.

The AI is an idiot in single play campaign! Just putting that out there! The fact that during boss fights or gauntlet style matches, you are constantly running to revive teammates can be tedious, and if not timed correctly, deadly. If you are not reviving them, you are running back to search for them and sometimes you’ll find them stuck by a waist high metal beam that seems to confuzzel the hell out of them. You quite literally will have to show them how to get out of that obstacle…yikes.

Four Eyes is the most useless AI of them all. While other AI characters died a couple times during a missions, Four Eyes seemed to perish anytime a zombie came on the screen. It was so bad that I literally rage quit and reset my team.

Additionally, you can customize your own guns and abilities via XP points, yet you can’t do the same for the rest of your teammates. This is a huge bummer and adds to their handicapped abilities since you can’t exploit their individual unique abilities.

The lack of squad commands is ORC’s biggest downfall in offline play! “GO”, “STAY”, “HEAL ME”, “NEED ANTIVIRAL SPRAY” ETC… There is no way to communicate with your squad during the offline campaign and this is so desperately needed, especially when the AI possess the mental capacity of a grapefruit. Biggest example is when Bertha, who has the ability to heal you, does so when she feels like it. Oy! 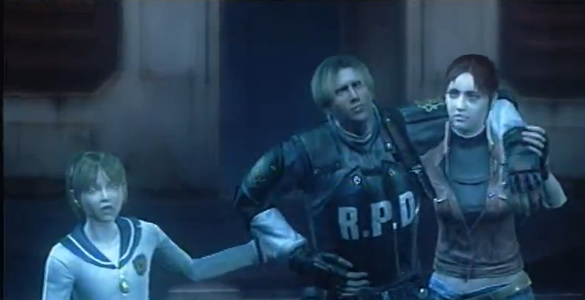 Cut scene character models fair much better than the in-game models. Cut scenes are seamless are quite beautiful but those same characters in-game are freakishly uncanny valley.  Carlos AKA Emilio Estevez and Leon suffer from drug bloat, Jill’s had too much work done on her face and Claire is probably the most tragic of all with a face akin to Thomas the Tank Engine. 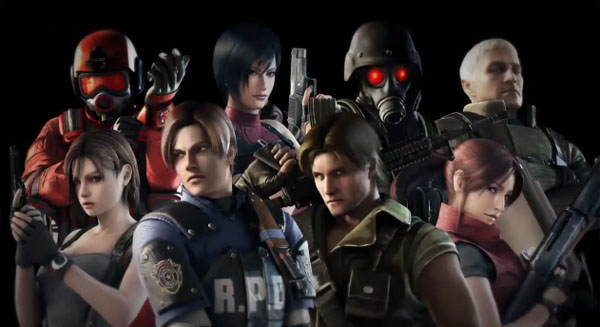 Just from a quick survey of online modes-Team Attack, Bio-hazard, Heroes and Survivor- Heroes mode is the most popular of them all. The ability to play as Claire, Leon, Ada and Jill is in high demand. So much so that if you are not quick enough to join, you’re stuck playing as Lone Wolf or worse, Nikolai. In the 4 days I have had the game prior general release,  I have not been able to play as  any of the aforementioned popular characters nor Spec Ops which is a bit annoying. With the release of the game, I sense it will not get any better.

This game more than anything made me long for a high Res. remake of Resident Evil 2 and 3 and I believe it’s high time Capcom delivered. While this is a nice side story, I would have thrown my money at Capcom much faster had this been a full fledged remake.

This game should not and CANNOT be a player’s first introduction to the world of Resident Evil. If this is your first Resident Evil game, do us a favor, put the controller down and go rent the Resident Evil Gamecube Remake or Resident Evil 2.

Despite it’s problems, ORC is just a fun game with loads of replay value and definitely worth renting. Yet it is worth remembering that this is not a true representation of the series millions of fans worldwide have come to know and love. If you can put that expectation aside, you’ll enjoy ORC. Otherwise you’ll be sadly disappointed.