A debut trailer for a first person shooter based AMC’s popular series The Walking Dead was released recently.  The Walking Dead Video Game is not to be confused with Telltale Games’s episodic action/adventure game, The Walking Dead.  Although there was no gameplay footage it set the basic premise for the game.  Developed and published by Terminal Reality and Activision respectively, the game puts you in the role of Daryl Dixon, the crossbow wielding survivalist and his Neo-Nazi brother, Merle.  The shooter is a prequel, taking place before both brothers meet up with different parts of the main group in Atlanta, Georgia. 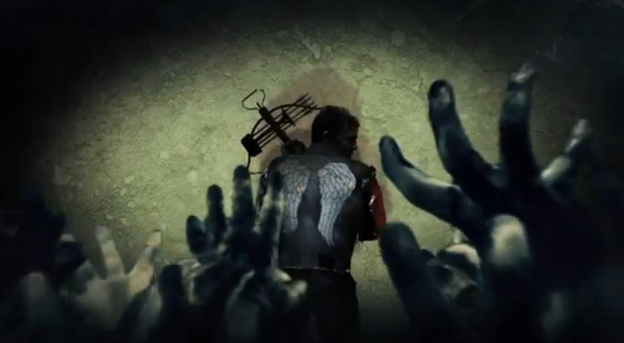 Instead of a straight run n’ gun, 360 degree no-scope headshot approach, players will be against the odds dealing with the overwhelming number of undead.  The undead utilize their senses in their never-ending search for survivors. Tactics and stealth will then have to be utilized as players analyze the situation, making the decision to fight or flight. These decisions in turn will lead to the success or failure of their journey.  The Walking Dead is known for characters whose motives and ideals affect the party. It’ll be interesting to see the characters Daryl encounters throughout the game and their influence on the party. In basic survival fashion, items such as ammunition, food, and medical supplies will be scarce.  Not only must players be smart in avoiding detection, they must conserve whatever precious supplies they have in their inventory.

There’s the possibility of incorporating weaponry other than conventional guns/ melee weapons such as Daryl’s crossbow.  Hell, maybe even improvisational weaponry based on scavenged items. I am hoping for no health regen in addition to a limited inventory to give the game a realistic instead of an arcade feel.  As badass as Daryl and Merle are, a regenerative health system isn’t really believable in a zombie apocalypse.  Then again, soldiers bleeding out Kool-Aid then magically healing their wounds faster than Wolverine isn’t either…but health regen doesn’t seem the case as medical supplies are existent. Offline/online co-op seems self-evident but more interesting is the possible inclusion of an online multiplayer component. If so, will there be a class or perk system and what type of game modes will there be?

I will be keeping a close eye on The Walking Dead FPS.  I’ll stay optimistic until I see official gameplay of the game.  Hopefully I won’t be disappointed like with Capcom/Slant Six Games’s Resident Evil: Operation Raccoon City.  Below is the debut teaser trailer.  The Walking Dead: The Video Game is set to be released in 2013 for the PlayStation 3, Xbox 360, and PC platforms.