On July 31st, Barcade Brooklyn housed an event for the New York Videogame Critics’ Circle hosted by Harold Goldberg, author of All Your Base Are Belong to Us and owner of nygamecritics.com. Some of the industry’s most influential writers came out that evening to meet readers, play some classic arcade games, and sample the latest rotation of Barcade’s extensive brew selection. The most memorable moment of the night aside from trading awkward glances with Giantbomb‘s Alex Navarro, was probably piggy backing on a drink order with Michael McWhertor while trying to keep my fan boy from showing.

Professional game writers weren’t the only ones having a good time. Designers, programmers, and independent bloggers joined the festivities. The room swirled with activity. The feeling of excitement built around refurbished arcade cabinets, laughter mixed with the hearty clanks of pints and glasses, while everyone from different walks of life celebrated under the banner of a love for videogames. Networking also happened, with business cards being exchanged as often as beers were being served. Everyone was eager to make a new friend or show off their latest games. One designer in particular, hooked up a couple SNES controllers to his laptop and introduced the crowd to Bara Bari Ball, a game where two characters fight over the fate of a bouncing ball. In fact, it was so entertaining that a couple of The Wired Fish’s writers couldn’t stop playing it. I’m looking at you James Corbett and Anthony DeJesus.

As usual, I show up to the event early as a way of scoping out the territory before the actual party begins. Usually, there are other early birds doing the same thing, but this time, the bar was pretty bare. The sign outside said Barcade and the walls were lined with vintage arcade machines, so I was pretty confident that this was the right place. If you’re reading this outside of 1337spots, this isn’t the first time I’ve been to a Barcade. On the surface, the decor followed the same minimalist, industrial design of their Jersey City counterpart, but that’s where similarities end. The Brooklyn Barcade is the real deal, a lived in history of character feels ingrained into the bits of furniture around the room. The wall behind the bar counter is littered with lost credit cards, fan made art, drink orders and every other knickknack, memorabilia and bottle cap that gives a bar personality and history. Brooklyn Barcade has certainly become a permanent local fixture.

It went from this–

After having my first drink, a North Coast Old Rasputin, I hit the machines and played a few titles including Final Fight and Galaga. However, it was Ghosts N’ Goblins that became my nesting place. After sinking about five dollars into the game, I started to remember how difficult these old games were. Often times, players were rewarded for making daring decisions as opposed to sitting in a safe corner. This realization motivated me to do what Ghost N’ Goblins has always been telling me to do; man up and talk to people. After a polite request, the bar hit me for another drink, this time, a Smuttynose Robust Porter. It was here I that stirred up a random conversation with Adam Borenblat, former Associate Editor of Video and Imaging for Kotaku. While he asked me not to quote him on anything, Adam and I talked about several things concerning the game writing business, how blogs work on a professional level, and the importance of establishing legitimacy. Really, I don’t want to misquote the man, but it was an inspiring conversation. Adam eventually left to meet with Brian Crecente and the rest of the Polygon crew, who then entered the bar and that’s when people started coming. 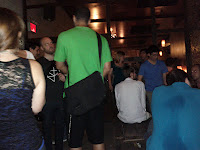 From there on out, more people became recognizable and the socializing began. I talked to locals who hit the bar after work, met other successful writers, chatted with PR intern and even made a few friends. If that sounds like a lot of friendship going around, that’s exactly what is was. People were personable, friendly and ready to meet new people; this was an event designed to bring east coast game writers and game industry people together, after all. Eventually, the night ended with me and some of The Wired Fish crew, throwing back a few brews and recollecting the very hectic night, all of us coming to one conclusion.

We need to do this again sometime.