It only took a week, but I finally achieved a single clear in Outrun, perhaps my favorite of the ‘classic’ SEGA library. 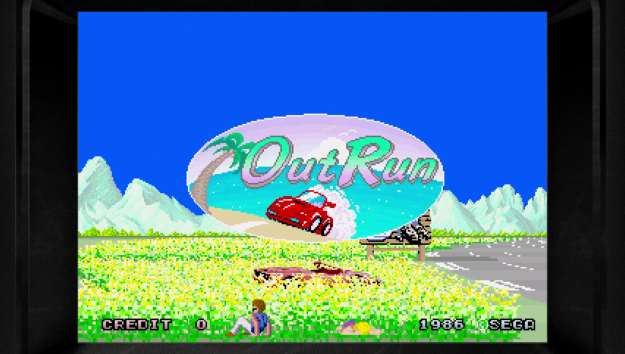 This wasn’t my first rodeo, I own and finished ports for both Nintendo 3DS and SEGA CD.  What changed things up this time around was that the arcade machine in Yakuza 0 has fixed difficulty settings and it’s pretty brutal.

And when I say it took a week, these were pretty big sessions, an average of three hours every day.  The last session when I finally won reached just short of seven hours.  For reference, a playthrough from beginning to end only takes about six minutes.

For me, Outrun has always been a therapeutic outlet.  Clearing it only took so long because I couldn’t focus, my mind was elsewhere.  It’s not only useful for treatment, this is the perfect game for testing mental stability.

Let me talk about the week outside of Outrun.  It started with an intended article, a combination self and character analysis.  I had just encountered my favorite video game character in years, the idea was to tell why I feel he’s a lot like me in a collection of short stories.  When I noticed anything including this character can get a little dark (see below) I decided to scrap it, at least for now.

When I work on any kind of content, including simple social media posts, I try to use as little from outside sources as possible.  For any relevant screenshots and gameplay clips — I’m going through personal recordings, not Youtube or Google Images.  Often I have to skim through hours of video content to crop out the few minutes I want, and if an image is necessary I’m going frame by frame until I find the right one.  Creating or at least editing is what I aim to do for a living, so from my perspective killing a project I’ve spent entire days on is catastrophic.

Valentine’s day this year?  Easy.  Sharing some love and good vibes sounds like the change I need.  The highest level of affection I have for anyone currently falls in the crush category, meaning that anything beyond a sweet gesture wouldn’t even be appropriate.  All I have to do is find the necessary video file, get just the right frame, remember that I’m not exactly skilled at captions or text related design and hours later : “Fuck this looks half assed.” “What are they going to think?” “Is this too much?” “Is this too little?” “Is this a bad idea?” “Anxiety, please!”

On the side, I guess you could say I dabble in botany.  Last year I tried my first herb garden, and hope to expand on that this year.  With a few remaining weeks of Winter I still only have the couple of plants I work with indoors.  Because of an oversight I managed to effectively ruin all of them and it wasn’t until the middle of the week that I realized it. 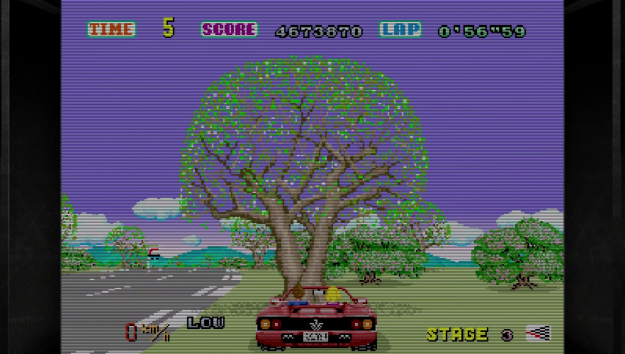 Since I’m talking about plants, these trees look spectacular, especially with the scanline filter enabled.

Okay, maybe I just need to get out and take a breather.  Good thing I have Saturday plans with my sis and brother-in-law, unless, of course, Dad’s car fucks up the day before and he needs to borrow mine til it’s fixed.

With driving irl out of the question, my poor performance in Outrun was the most obvious sign of everything taking its toll.  Unlike many modern games where you can compensate difficulty by becoming more powerful, there are no upgrades here.  Along with persistence and learning the turns in each level, victory requires skill and the ability to adapt to random traffic patterns, neither of which clicked for what felt like an eternity.

Focus is also essential.  The real challenge is going for six minutes without allowing your mind to drift, because losing track of what’s going on for a split second is enough to cost the game.

Not only was I able to address all the things that were bothering me, but I also kept track of physiological changes such as how I would spend the first three levels on my route perfectly calm, but noticed my heart rate jump as early as the fourth.  I had to become aware of my breathing and avoid hyperventilating.  Keeping my eyes fixed on one part of the screen was another issue that needed to be addressed.

In the end I successfully identified and suppressed every source of distraction long enough for the win.  It took forever to pass the Outrun test, but when I did a significant amount of built up stress immediately dissolved.  Here I am successfully publishing something after how long?  It feels good.