It is merely E3 eve and yet we’re already getting announcement bombed.

In a move that I could not have conceived in even my deepest inebriation (and trust me, that is some DEEP shit), Omega Force, which is the team in Koei Tecmo that works on the Sangoku Musou aka Dynasty Warriors series and most of it’s spinoffs, announced that the newest anime-fused branch of the franchise would be Berserk Musou, which will theoretically combine the hacking and slashing action of the Warriors games with Berserk, Kentaro Miura’s long-running masterpiece of dark fantasy and incredibly brutal horror.

Berserk, which has been running in Japan since 1989, is a seminal and still extremely popular seinen, which is manga skewed at older males and therefore usually contains far more graphic and dark content. But even by seinen standards, Berserk is a particularly gruesome series. It’s not so much the astoundingly bloody violence, horrifyingly monstrous demons and frequent bouts of sexually explicit imagery and jaw-droppingly fucked up, visceral terror that is visited on men, women and children in roughly equal measures. No, Berserk’s fangs involve its underlying themes of despair, interpersonal violation, control of or domination by the darker parts of our nature and the horrors of predestination, the death of self and free will, and the idea that nothing you do can ever change the suffering you are born to endure and that’s only SOME of what you can glean from the series in its first few volumes, all of it lightened ever so softly by the occasional ray of hope or positivity that the series grudgingly shares from time to time.

And yet, it is considered by many, including myself, to be a masterwork of exhaustive worldbuilding, fantastically deep characters with some of the most incredibly realistic personalities ever conceived in manga, running the gamut from idealists to barely-functioning rape victims to Nietzschien supermen, and all of it wrapped up in some of the most beautiful artwork the industry has to offer, even if said artwork is frequently of the most incredibly disturbing monsters you will ever see. 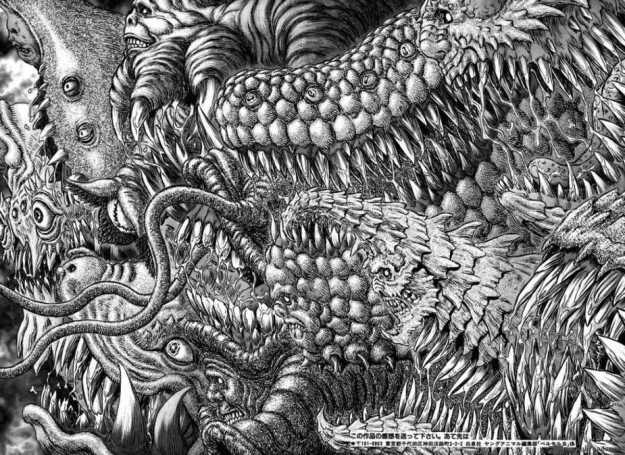 These are mild examples of the menagerie of nightmares Miura makes. Meditate on that.

But enough of my jizzing on the series. The real question here is if it can work. On one hand, Berserk is a series that is very big on violence, with battles being frequent and brutal against a variety of visually grotesque enemies and the occasional human soldier retinue. So even though most of the series’ big fights tend to be smaller in scale, I don’t think there would be too much of an issue getting enough content to make a properly sized Warriors game, especially if you wanna be daring and make some of the apostles (humans who have become higher demons) playable. The most likely way to do it would be to set the series during the Golden Age Arc, which is almost exclusively large-scale battles between human armies, but the trailer, which depicts one of the more…deeply horrifying moments in the series, does nothing to hide the demonic aspect of the storyline, which is almost completely unaddressed in the above-mentioned arc. I guess we’ll have to wait for further announcement.

Of more concern to me would be preservation of tone. As mentioned, most of what makes Berserk such an effective horror-fantasy is its incredibly dark, nearly suffocating mood. The series can be hopeful, even humorous at times, but is mostly unrelenting, with almost every character, and even a fair amount of the demons, having some incredibly dark and traumatic backstory or character trait. And that kind of deep, painful drama is hard to maintain when the majority of the game is hitting things in ever-more creative ways with ever-more absurd weapons. And yet, looking at the trailer and the INCREDIBLY NSFW footage we’re shown, it looks like they’re at least going to try to make this dark and in-line with the series, unlike the Fist of the North Star spinoff from a ways back that, although bloody, was still quite campy and over the top. Looks like they really want to earn that “Most evil musou game” moniker they were throwing around.

Well, all my supposition out of the way, I can’t deny that this has potential to be the most interesting idea Omega Force has had in a long, long time. Much as I love my bog-standard Warriors games, a little new blood every now and then can do nothing but help. And given the series in question, there’s going to be a metric fuck-ton of blood coming our way when the game is released in Japan later this year, and whenever they bring it over here.