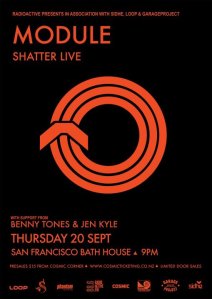 Shatter composer Jeremiah Ross, aka Module, is going to do a live performance of the Shatter soundtrack in the San Francisco Bath House in New Zealand. This is NOT in San Francisco, repeat, NOT in San Francisco. This is in a club called San Francisco Bath House. Okay, now that that’s out of the way, he’s informed people on his Facebook page that if enough people are interested, he’ll livestream Shatter Live on Ustream for those that can’t make it to NZ. All you gotta do is go here and like/tell him you’re interested. The performance begins at 9PM NZ time on September 20th. He’ll be accompanied by Benny Tones (which he collaborated with before) and Jen Kyle.

You don’t know about Shatter music? Well get acquainted! It’s awesome! And buy the game on PSN or Steam while you’re at it!