And this cover is the most normal aspect of the game.

Ah, the rhythm game. Nowadays, everyone knows the “Modern Music Genre” games like Guitar Hero or Rock Band. But there is a certain sense of sadness that washes over me when I remember the pre-Guitar Hero days. The sense of experimentation and new-ness that permeated the then-small genre is all but gone now, replaced by big plastic instruments and woefully similar sounds.

This is, of course, not to say that I don’t like them. I have had many a good time playing Guitar Hero (it’s almost a tradition to go a few rounds with my friends in III every year on my birthday), but consider the trailblazers of yesteryear: Parappa the Rapper, Space Channel 5, Samba De Amigo. So much creativity in every one of them, be it through strange play styles or just plain odd music choices. Today, we are going to talk about one that has both: a strange and challenging gameplay style and a selection of songs that must be heard to be believed. I am talking about the early 2000s cult classic, Gitaroo Man.

This is Your Brain on Gitaroo

Well, let’s start at the beginning, shall we? U-1 (yes, that’s his name) is a loser of a boy with aspirations of being cool, mainly to impress his love interest Little Pico. Unfortunately, no matter what he does, be it on his own or at the advisement of his talking dog Puma, he always seems to be upstaged by his rival, local cool kid Kazuya.

“Wait, rewind a bit. Talking dog?” you ask? Yes, U-1 is the owner of a talking dog, a fact that doesn’t terrify him nearly as much as it should. One day, while being taught how to play the guitar by Puma, U-1 is attacked by a demon monkey wearing a diaper named Panpeus (yes, it’s one of THOSE games). After freaking out for a second, U-1 gets help from Puma, who turns into some weird turntable-dog fusion called Puma AC-30 and throws a guitar at him. When he catches the guitar, U-1 turns into the Gitaroo Man (TITLE DROP), a superbeing who uses music to fight his battles and wears an outfit so silly that David Bowie weeps for him. 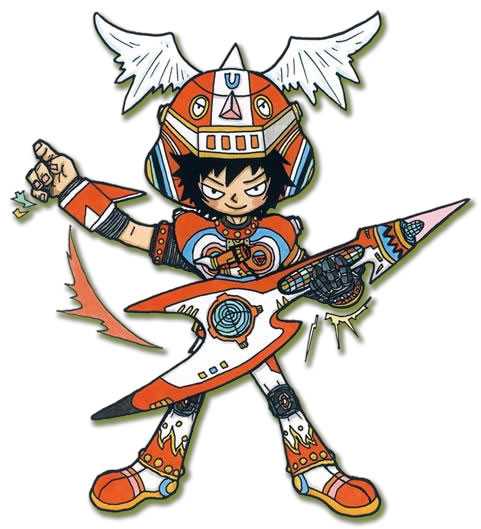 Puma reveals that the little monstrosity who just attacked them is a Gravillian, and that they’re collecting the Gitaroos (instruments that utilize music as their ammo and the weapons used in these battles) so that their leader, Prince Zowie (who looks oddly like Kazuya but, surprisingly, is not him) can take over the universe. Through his adventures, Gitaroo Man will gain confidence, learn of his heritage, fulfill his destiny, and fight (among others): a fat black man in a bee suit named Mojo King Bee, space shark Ben-K (who turns into a reggae spitting mecha, of course), a strangely androgynous, Mozart-esque guy named Gregorio Siegfried Wilhelm III and a trio of skeletons called the Sanbone Trio who attack with music they play from their own bones. Yup, it’s official: Gitaroo Man is what would happen if Pee Wee Herman made a rhythm game.

Hello kids, the word of the day is "Lysergic Acid Diethylamide"

Explaining the gameplay of Gitaroo Man is annoying, but I’ll do it (because I love you). The game has two types of gameplay. In both, you have a point in the middle of the screen that acts as your sort of “aiming hub”. From here, you’ll use the analog stick to move a sort of “area of effect” cursor  with a green line at its center around the hub. The first type of gameplay is a bar that comes in from one side of the screen. You must use the joystick to line up the green line with this bar, and press and hold a face button in time with the notes. Too short and you won’t get the full effect, and too long and the note doesn’t catch. Also, most bars will snake around as you go along, so you have to use the analog stick to keep the green line moving with it. The second type of gameplay involves notes (in the form of face buttons) flying towards the center hub on the screen. You must press the corresponding face button as the notes hit the center in order to win.

Each fight is broken up into three stages. Typically, you’ll start out in “Charge Mode” in which you will use the “bar style” gameplay to fill up your health bar. Then you will move into “Attack/Defense Mode”, where you will alternate between the “bar style” and “input style”. The former will let you do damage to your opponent, while the latter avoids damage from them. Finally, once you have depleted your enemy’s health enough, you’ll enter “Harmony Mode”, where you’ll finish them off in one last epic burst of song. This order is not absolute; some stages you’ll start out in fighting, others you’ll get multiple chances to charge. And in others still, you’ll alternate between all the forms multiple times.

Gameplay is annoying to master, but very addictive once you get the hang of it. Just a bit of warning, this game WILL kick your ass many times. After stage two, all bets are off (and even those two aren’t exactly cake walk), and you will really need to know your shit to get past monsters like Ben-K and Gregorio. But the satisfaction that you get as you finally have them against the ropes, and “Harmony” kicks in is one that can not be measured.

As you may have noticed from these pictures, the art style of Gitaroo Man is…interesting, to say the least. Everything is bright colors, weird outfits, and general artistic madness. And yet, it works fantastically in the context of the universe. Main characters are distinctive, enemies even more so (did you see the nightmare Barry White above?) and all in all the art style really serves to make Gitaroo Man stand out from the crowd in the best way possible.

This is a good thing because that graphics engine is not doing it any favors. Although it works in the context, from a purely technical standpoint, the graphics are blocky and distinctly unlovely. If it weren’t for the buttery smooth, uninterrupted framerate, one would assume that this was an N64 game at a glance. So aesthetically speaking, whether you can stand this game will have to do solely with your enjoyment of the art style.

But this is a rhtyhm game, after all. Who cares about the visuals? And it is in this arena that Gitaroo Man shines like a wonderfully polished jewel. Gitaroo Man has one of the most astoundingly varied song lists in the history of rhythm games, from the smooth jazz trumpeting of “Bee Jam Blues” to the J-techno wonderment of “Flyin’ to your Heart“, all the way up to the epic rock opera known as “Tainted Lovers” and guitar-heavy finale “Resurrection“. This quality continues all the way up to credits theme “21 Century Boy“, which I swear sounds right out of anime classic “Fooly Cooly”. Every single song is amazingly well done, and this is probably one of the most purchase-worthy soundtracks in gaming.

Voice acting is…well…how do I put this. This is a group of people who couldn’t sound natural if they were asked to breathe for a few minutes. It’s the same group who did the VO work on “Musashi: Samurai Legend”, and we all know what a masterpiece that was. In all fairness, the actors don’t do too bad a job in this, maybe because the game in question requires that the voices sound a little off to match the characters. Lenne Hardt’s U-1/Gitaroo Man is appropriately nasal and awkward sounding, Douglas Kirk’s double play of Zowie and Kazuya makes them both appropriately douchey, and Ryan Drees gives probably the best performance in the game as knowledgable and mischievous dog companion Puma. The voices fit the game fine enough, although I’m not entirely sure it’s in the way they intended.

So are there any problems with the game? Well, there’s the slight issue of there being only ten stages in it. It’ll still take you awhile to beat it, what with the challenge level, but once you do it, that’s it. No bonus songs to unlock (well, on the console version at least, more on that in a bit) and only a little gallery of bios and pics to keep unlock hounds happy. It’s worth noting, though, that the unlockable “Masters Play” is a whole different (horribly difficult) animal, and will give a bunch more playtime if you hate yourself enough to play it.

This is only on normal. Masters Play? Yeah, you have fun with that.

Review notwithstanding, you might have a little difficulty finding the game. My console version was found purely by accident several years back in a random EB Games (R.I.P.), and even then it was considered pretty rare. You can find a copy online, for sure, but good luck finding one in its entirety (manual, box, not scratched to holy hell) for less than 60 bucks. I myself loaned my copy to Prota and hope to god he takes care of it, else I’m taking it out of his ass…

You might have more luck finding the port, Gitaroo Man Lives!, for the PSP. It’s a pretty straight port, but the controls are a little messy, and it’s a little less smooth. In exchange, you get some song remixes and two new songs: unmemorable samba bit “Toda Passion” and awesome nu metal epic “Metal Header”.

So in short, what is Gitaroo Man? If not one of the best rhythm games ever, it is certainly one of the most memorable. The visuals, song list, and general mood of the game are all top notch insanity. It might shock you to know that this amazing work of originality was made by a partnership between NIS and, of all companies, Koei, the people known for making the various “Warriors” games (Dynasty Warriors, Samurai Warriors, etc.). The game’s content is a little thin, to be sure, but what you’re getting is amazingly fun and unique. And in a world of “Guitar Bands” and “Rock Heroes”, I think we could all use a little of the old ultracraziness.