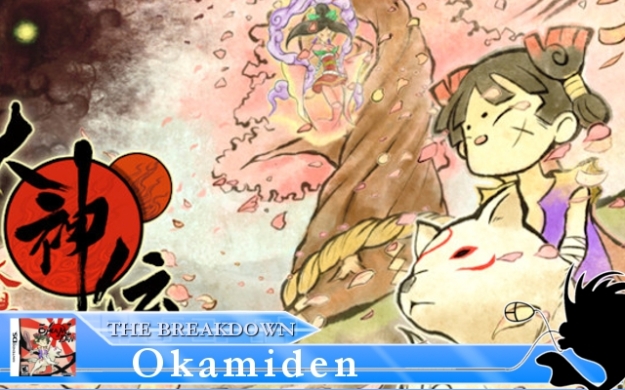 Hello Fellow Fishes. It’s been a long time coming, but it’s time I bring back The Breakdown. Before starting The Wired Fish, I used to do reviews of games on DeviantART. My last review was The Conduit, which I reviewed July 27, 2009. At the time it was my only platform to do any form of blogging. But now, things have changed, and I have more tools at my disposal for writing something with a bit more pizazz. One thing that I stand by still is my review format. I detailed at one point how it works on dA, so go ahead and read it to get an idea of how The Breakdown works. To put simply, there is no overall score, only individual ones. And it is impossible for a section to get a perfect 10.

Anyways, onto the show at hand: Okamiden. This sequel to Okami’s been a long time coming. First appearing on the PS2, and then The Wii (complete with IGN’s Stamp of Approval), Okami was an amazing experience that I would never forget. Unfortunately, the game didn’t really sell well. It did garner a cult following though. What made matters worse for the possibility for a sequel to Okami is that 1) Clover Studios shut down, only to independently reopen as Platinum Studios. and 2) ReadyAtDawn, the guys that handled the conversion of the game from PS2 to Wii, went back to work to make another God of War game for the PSP. So things looked pretty grim for Okami fans. Then one day, Capcom revealed that Okamiden was being made, and it was for the DS. I, unlike many, welcomed the fact that it was a DS game, as now there is some tactile feedback with the celestial brush techniques (I’ll be getting to that later). So, Was all that worry for an Okami sequel worth it? Or did Chibiterasu piss on all of our hopes. Hit the jump to read the full review.

Okamiden takes place 9 months after the events of the original Okami. During that time, peace was enjoyed all over the land of Nippon. However, a new evil is lurking, one that wants to revive the evil entity known as Yami (that ball you fought at the end of Okami).. You gain control of Chibiterasu and encounter Kuni, Susano and Kushi’s son. Now, you may be wondering how the hell these two have a school-aged son in a matter of 9 months. Well, everything gets explained later in the game (and no, Kushi does not have some magical Wonder Womb that gives birth to 7-year-olds… And lord knows that would be painful). You meet other partners along the way who each have their own personalities, techniques, and attack patterns. The story does start off slow during the first six hours, but it does pick up a bit afterwards. While the story does get good, it starts to sidetrack a bit. However, these smaller stories are rather entertaining and do have some great moments upon their conclusion (some of which can make a grown man tear up a bit). Then the story does something that, in the previous game, annoyed me. I won’t say what it is. But let’s just say you do something… twice. I will say though that the game’s ending, compared to the previous game’s, is pretty damn depressing. But in the end, this story is an okay follow-up to the original. It would’ve benefited from having the side-stories not take up most of your time, but they do end on some high notes that play into the game’s theme of faith in the gods. Score: 8

The Japanese ink style translates suprisingly well onto the DS. There were quite a few times when I had to remind myself that this was a DS game I was playing, as most of the games I’ve played on my DS were 2D sprite based games with minimal 3D in them. I was even amazed at how the game handled the way you revived sections of the land of Nippon (when you drive the darkness out) as these moments were the high points of the previous game. It does become obvious that the draw distance is pretty short, as objects like trees and people would pop up. It had me wondering how, for instance, the buildings in Sei’an City were handled then since the world is split up into smaller sections. Then I saw it: the sections you were in had the buildings in 3D, but the buildings in others were simply 2D objects facing the camera. They became 3D once you entered that sections. It’s a good workaround to make the world not feel so empty. The presentation of the menus, borders, and textboxes is similar to the original, although the way the Celestial Brush transitions are handled is a bit messy and somewhat slow. There were some graphical glitches I encountered inn the Ice Room dungeon where many things happening in one section made an ugly black line go right through the background. But the Ice Room was the only instance of that glitch happening. But as far as this goes, I’m impressed with what Capcom has done with the hardware here. So big ups to them. Score: 8.75

The sounds for the game match the predecessor’s well. The gibberish from the previous game has returned. I will say though that some of the Celestial Brush techniques tend to make the music fade out, as if the sound was making use of one of the music channels (like how the old consoles did it, but backwards). As for the music, it is a bit more subdued this time around, but it is still amazing to listen to. Some familiar tunes, like Shinshuu Fields and Kamiki Villiage has returned. And some themes have nods too, like Sakuya’s Theme having a little bit of The Sun Rises in it. Most of the songs maintain that traditional Japanese theme. But there is one theme that I find interesting. The song doesn’t sound terribly Japanese, but tropical instead. I kinda like this, perhaps unintentionally, blend of two genres here. Of course there is one star of the show that is played in the game that I thoroughly enjoyed:

Here’s where things become both hit and miss. I’ll start with the miss first. In the previous game, there wasn’t much incentive to really get into a battle unless you wanted money, practice, or were forced into one. Unfortunately, this stays true here. While now there is material to get to upgrade the weapons, there really isn’t much of a reason to upgrade the weapons. I finished the game upgrading nothing. While I’m probably dumb for not doing that, I really didn’t feel like trying to figure out how to purify the enemies upon their defeat (it’s done by doing a brush technique before or the moment an enemy dies). With the battles themselves, they hold up to the previous game’s. But I don’t the fact that you are graded on Partner Help (along with Time and Damage Taken). The issue here is that when doing a combo, your Partner will attack after the third hit. There are some enemies that take more damage from a Brush technique than me going up an hitting them. Some, enemies are better to take care of from afar than up close. It’s these times when the game will grade my partner help as poor when, in reality, I didn’t need their help in the first place. While I could get a Cherry Blossom rating on Time and Damage, my Partner not doing anything will drop me to a tree rating. Another issue I had was how the world was segmented. While it is understandable that this is different hardware Capcom was working with and that they couldn’t make the the world mostly seamless like Okami, it would disrupt the flow of the game. This become even more apparent in the towns like Yakushi and Sei’an City. Thankfully, only one brush technique gets confused with another this time. Rejuvenation, (which is done by drawing a circle on something, like a dead tree) becomes confuse the moment you get the Wind technique (which can be done by drawing a swirl. A quick circle could make the game think you drew a swirl). Also, it’s hard to really die in the game.

What this game nails really well is the puzzle aspect of the game. The dungeons, like The Legend of Zelda, are littered with puzzles.In the beginning, the game eases you into using The Brush techniques and your Partner to solve puzzles. But things get really good when you begin to use both in tandem, along with keeping yourself safe from attacks from lesser demons. The boss battles are also impressive as well, especially the final boss. The camera does a good job of tracking your movement. It does move somewhat slow during battles, but overall it does its job well. With the Brush Techniques, doing them on the DS feels right at home, so now I don’t feel like I’m flagging a plane to land. I do have big hands so it does get in the way, but it’s my fault. Do techniques is also just as fast as it was in the Wii version, so battle can pass by relatively quick if you’re good. So to wrap up gameplay, more could’ve been done in terms of battles. Traveling is really the fault of the hardware, so I really can’t blame Capcom too much. But there could’ve been more motivations for getting into a battle and actually getting challenged. Score: 8

So overall Capcom did an okay job with  Okamiden. It’s not the best, but it’s certainly not the worse. For now it seems like there is no more evil in the land of Nippon. But there could be more on the horizon (we thought that in the original game). Maybe we’ll see Chibi grow up? Who knows. But for now, we could at least thank Capcom for giving us a sequel to a game that deserved one. If your wish for a second opinion on the game, check out James’ review of Okamiden.

2 thoughts on “The Breakdown – Okamiden”