The Federal Trade Commission conducts a yearly undercover survey throughout the United States that monitors how often retailers prohibit the sale of mature products and tickets to minors. They sent 13-16 year old teenagers into stores and movie theaters across the country to see if they were able to purchase items for mature audiences, such as M-rated video games, R-rated movie tickets, Parental Advisory Labeled music CDs, R-rated DVDs, and even Unrated DVDs.

Now, I have some news for all those people who complain about mature video games easily falling into the hands of poor innocent children. Video game retailers proved to have the highest enforcement rate…by a long shot. 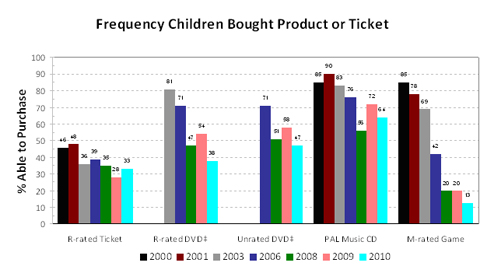 As you can see in the chart above, only 13% of under-aged teenagers were able to purchase M-rated video games last year, the lowest percentage out of all the items. And that’s down from 20% the previous two years, in which video game sellers still retained the best enforcement rates. Nearly 9 out of 10 minors weren’t able to purchase M-rated games, while almost half managed to buy unrated DVDs, and even more snagged PAL CDs. Based on this survey, retailers are doing a much better job preventing young teens from acquiring mature video games than anything else, yet we hear the media often complain about the exact opposite.

What does this mean? I guess this means less “nine year old kids” playing Bulletstorm. But in all seriousness, I think this really shows that the video game industry is doing what it can. The ESRB does its job of rating games and puts detailed information online about game content for all to see, while retailers appear to be heavily enforcing those ratings. “The strong support that the ESRB ratings have enjoyed from retailers is crucial, underscoring their firm commitment to selling video games responsibly,” said Patricia Vance, president of the ESRB.

Now if more parents took an active interest in what their kids play, we could see even less adolescents purchasing mature games. Consoles even have parental controls to help keep kids from playing certain games if they do manage to get a copy. So I don’t want to hear people complaining about the existence of mature video games. The creators have a right to make them, and there are plenty of things already out there to keep mature games away from younger children. Plus, parents can (and should) fill in the gaps by being more involved in their child’s gaming.

If you’d like to see even more details and information about the survey, check out the source itself. You know, despite some of the horror stories about Gamestop we have on The Wired Fish, the store actually seems to be the best when it came to preventing minors from purchasing mature games, given the number of Gamestops surveyed. Go figure.