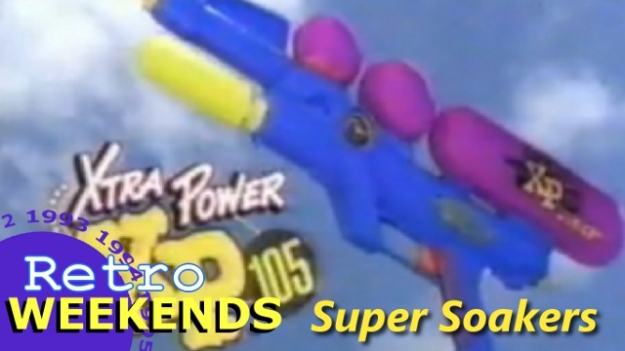 Editor’s Note: Retro Gaming Weekends has not been discontinued. Instead, it is now being merged into Retro Weekends, which covers anything from toys, cartoons, anime, commercials, live-action shows, and of course games, that I grew up on in the 90s and early 2000s.

Ah the Super Soaker. It was somewhat of a status symbol of your wealth when you were a kid. Of course by wealth I mean how much you begged and pleaded with your parents to lose money on getting a Super Soaker. While your typical discount store had those cheap little water guns that shot streams resembling piss, no one messed with you the moment you came out with this beast of a water gun. Of course, once you had one, the other kids wanted one too and eventually got one. And then the real war began as you’d try to last as long as you could without having to reload. No one really knew when exactly you won a watergun fight, but I’m assuming whoever got the heavier clothes lost. Regardless, I enjoyed a short run of having not one, but two Super Soakers! After the break, my story and why I stopped playing with Super Soakers. 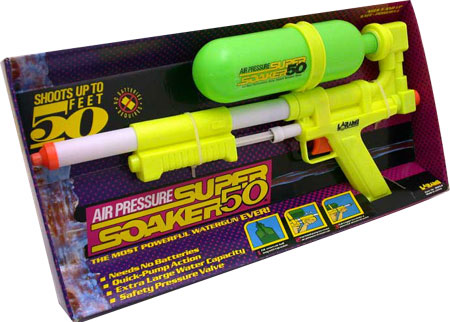 Before I begin my story, I should probably explain a bit of the history about Super Soakers. Super Soakers were made by a company called Larami. They released their first water gun, then called the Power Drencher, in 1989. The Power Drencher utilized pressurized air that was manually pumped. Upon pulling the trigger, the air would force water out with more range and power than the aforementioned piss-stream guns. Around 1991, the Power Drencher was rebranded as the Super Soaker. Hasbro would acquire Larami in 1995, but it let Larami keep its name. All around the 90s, Larami made a long line of Super Soakers, which consisted of the easy to carry XP models, and the bitchin’ beast-of-a-gun CPS line. They even made XXP, which were double barrel water guns! In 2002, Hasbro dropped the Larami brand. Now, the Super Soakers are under the Nerf line of toy guns that Hasbro runs.

My first memory of the Super Soaker started with the ever famous “WETTER! IS! BETTER!” commercials. I mainly remember the drill sergeant in those commercials and the somewhat nasally voice and contorted faces this guy would make. He was like a mix of Gilbert Gottfried and Mike Tyson. But anyway, I knew that the Super Soakers were going to be out of my league in terms of money. I remember my cousins had the Super Soaker that had a backpack (yes, a freakin’ backpack). The gun itself was huge. It the whole package looked like a Proton Pack. My mom eventually got me one (probably the result of begging and pleading). The gun: The XP90 Pulse Fire. After that, I’m not sure how the hell I managed to convince my mom to get me another one, but I did, and I got the CPS1500. 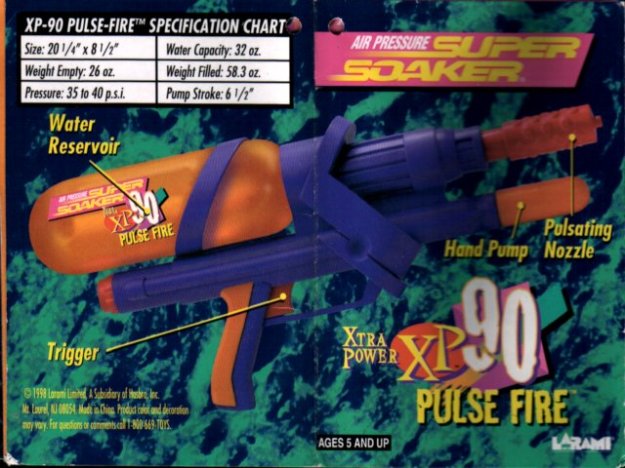 The XP90 Pulse Fire was a unique gun in that it shot water differently. The nozzle was like a piston and water would be shot out in rhythmic fashion. There was the option for it to shoot water in a regular stream (turning the nozzle itself to “stream”), but it just wasn’t as fun. I think what made this a fun gun was that it shot like a machine gun. The good thing about this gun too was that because of the way it fired, it wouldn’t consume water as fast as the other water guns. The other Super Soaker I had was the CPS1500. This was a huge gun with a larger water tank than the XP90. The main draw of the gun was of course its imposing size. There weren’t any other bells & whistles beside the size, bit it got the job done. The one setback of this watergun was that the tube that took in the water was in the middle of the tank, so once the water depleted to a certain level, you’d have to hold the gun in an awkward position to pump water.

Their Downfall (aka, Why I Stopped Playing)

The XP90 was the first the first casualty of the Super Soaker pair I owned. It might’ve been my childhood idiocy of swinging it around like a club, or simply dropping it, but the nozzle of the XP90 broke off. “Oh shit…” I exclaimed (yes, I cussed as a kid. Sue me). My mother and I attempted to repair the nozzle by putting it back together with the body of the gun with krazy glue. It actually worked…for 5 minutes. When the glue dried, I tested it out to see if it worked. It fired well on Pulse mode, as if it had never broken at all. But when it came to Stream mode on the other hand, the nozzle popped right out. My mom and I had to laugh! The gun still worked though. With no nozzle there anymore, the barrel was wide and it shot a very thick stream. The drawback was that it depleted the tank very quickly. 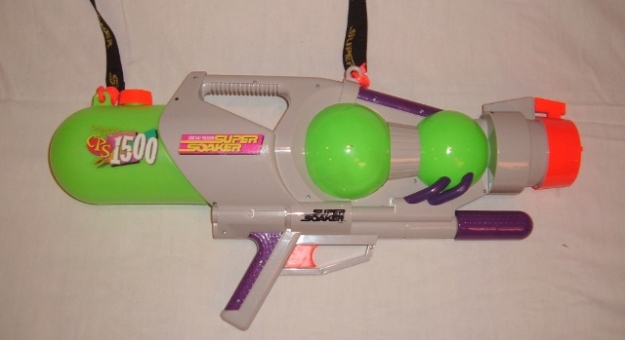 The CPS1500 lasted longer without a blemish than its smaller counterpart. But the beginning of the end occured when my childhood idiocy kicked in and I banged the pump handle against my bed. It broke off the handle. This was not going to be solved with krazy glue due to the nature of how these things worked. Do keep in mind, it was only the handle. The rest of the shaft was still intact. The only thing now is that it was harder to pump the gun, and putting the shaft back to its resting position meant difficulty getting it back out (Jesus this whole paragraph sounds dirty…). The CPS finally met its maker when, for some dumbass reason, I disregarded the fact that I put dirt in the damn tank! I don’t know what possessed me to think I could shoot dirt out of the nozzle, but that enterprising nature David described in Episode 8 hit me, and it happened. You can probably guess what happened next, but I’ll amuse you. The dirt clogged up the innards of the gun to the point that nothing could pass. The CPS was finished. The XP90 still lived. But that too was retired after many years in service.

Today, I don’t have these Super Soakers anymore, or any at all for that matter. I really don’t plan on getting one again since I’ve grown out of that phase. But it’s interesting to see the crazy crap that Habro’s pumping out lately. I will say that as annoying as it was to see the Wetter is Better commercials constantly on TV, they were successful in getting kids to get the water guns. It felt cool knowing I had one instead of those cheap knock-off water guns. But like many things in my childhood, it was time it rode off into the sunset… to make way for another childhood fad.