A few months ago, one of the news sites I visit regularly posted an article up about a dating sim starring disabled girls.  It sounded cool for the novelty, so I loaded up the trailer.

It was looking alright until the part where they show the girl with half her body burnt give off that smile.  If that’s not a tug at the heart, I dunno what is, so I put the game on my radar.  Soon enough it was finally released with the asking price of zero dollars — I couldn’t go wrong!  I gave it a hasty download. 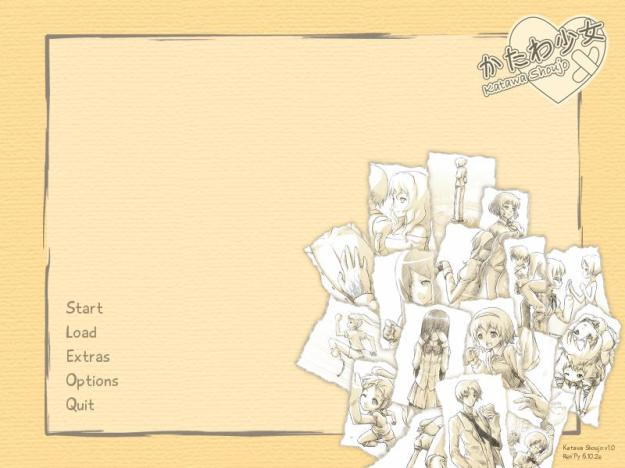 One of the first things I realized was an option to disable adult content in the game, meaning that not only would it be a dating sim with girls that have various disabilities, but there would also be a likely sex scene here and there, a pretty risky choice.  If written poorly, the game could reduce the game to make the player feel as though they’re just playing the game to have sex with disabled girls.  There’s a very fine line between having sex with a girl because she’s disabled and having sex with a girl, who happens to have a disability.  Poor writing could easily change such a game from a good romantic drama to a game for people with a fetish.

Part of the reason I like Hisao is that he often talks and thinks a lot like I did when I was going after girls in High School... even if his monologues tend to lean toward the depressing side.

I like sex themes to be honest and feel as though many dating sims that omit the sex are hiding a vital part of romantic relationships.  There is going to be sex, and, well, I like watching it unfold.  Most of my start was praying that exploring the sexuality of these girls was balanced out with a good story and maybe some nice romantic drama that you might come to expect from a game of this sort. 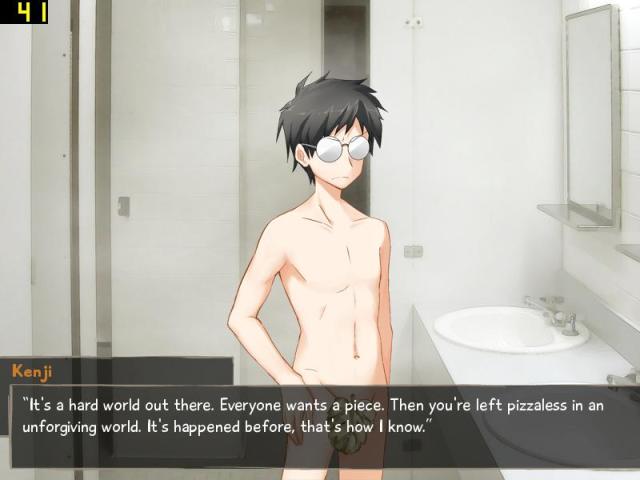 Meet the sexiest character in the game : Kenji

The writing is phenomenal.  The first act determines which girl you find yourself going after (unless you don’t befriend any girl in which you get a shitty ending and die).  The following 3 acts tell the tale of what goes on between Hisao, the protagonist and the girl chosen in act 1.  Each of these stories have their own flavor, and some have more choices than others, but there’s always some kind of conflict and resolution. 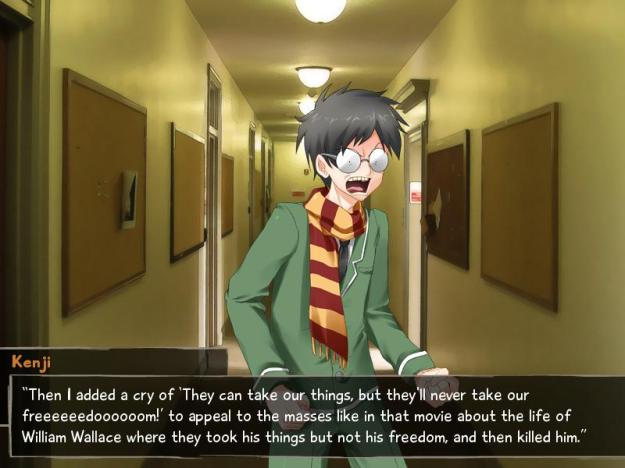 Katawa Shoujo is not your typical text game also.  Aside from the first act there are sometimes very few choices to make in the acts that follow.  Aside from Hanako, the girl with the burns, I haven’t stumbled upon a bad ending.  Because of this it feels far less of a game, but gives Hisao a lot more personality as you see a moment where a decision has to be made and he’ll often make the decision on his own.  That’s a good thing, because in a lot of visual novels, I often feel like I’m playing myself rather than the protagonist and his identity gets brushed aside.  With less choices to make, Hisao keeps a strong identity.

When Hisao is sad, it shows.

Around the middle of the game, and in every arc, Hisao receives a letter from a former love interest, and the way he reacts and responds to this letter is different depending on whose arc you’re on.  The way his academic career progresses and how he handles life outside the dating world also change depending on the girl.  It’s interesting to see how the course of the game and Hisao’s attitude differs just based on who he’s dating.

The sex scenes are also drawn really well. If only the music for most of the scenes weren't so depressing.

To be honest, to experience the whole game is going to be a lengthy read that might put off a few potential players, so I’m going to list off each path in a top 5, so you can start with the best, and go for the weaker paths as a little extra.

Let me make this clear : Shizune is probably the most attractive character in the game, especially if you’re into chicks with glasses.  The problem is that her path took me 4 – 5 hours of text reading accompanied by a single choice that determines the ending you get (they are both pretty lame).  The one thing that makes this path worthwhile is that it gives a little more insight into her best friend, Misha’s character who is not available as a dating option for this game.

One of my favorite images in the game, this comes from her good ending.

My initial inspiration for playing the game.  She’s also the only character that gives off a full spread shot in the sex images, so that’s a plus.  Her path is probably the shortest in the game and even though the ending was nice, her delicate personality would get on my nerves every now and then.

Still, her ending is among the good ones, far better than Shizune.

Look at her go for that Tangerine -- this scene is cute and I love it.

Rin’s path begins where I started to really appreciate the drama in Katawa Shoujo.  Here you have a girl who lives in her own world, making a downward spiral in the name of her art, in which Hisao gets caught up in, and it’s sad watching the lengths he goes to in order to be with Rin, even when he’s clearly thrown in the friend zone.

It reminded me of when I was a young romantic always thrown in the friend zone and the disasters that would immediately follow, and because of this I found myself empathetic with a lot of his emotional moments and rooting for his success at the same time.

Very close to being my number one, Lilly’s story is pretty long, but fulfilling.  Apart from being blind, her personality is quite refined and she doesn’t have many of the issues that the other girls have.  In fact, until the end, it plays out just like a regular relationship in development.

There’s no real conflict until near the end, but once it arises, the story becomes an emotional roller coaster.  If it’s the strongest drama and climax in the game you seek, Lilly might be a very good starting point.

If we ever have a big Wired Fish talk about video game crushes, I would have no choice but to bring up Emi, the “fastest thing with no legs”.

When Emi wants to be cute, she's damn cute...

In contrast to the other girls, Emi is far more assertive, wild and open with her sexuality which of course is a facade for certain emotional issues.   These issues are treated as a secret until the very end, but the writers went a little overboard with foreshadowing, so it’s painfully obvious even in the second act.

When Emi's feeling crazy about you, she looks damn crazy...

Even though she loses the surprise factor fairly early, there’s just something in her animation and the way that she acts that is both hot and makes her seem more like a real girl than a character in a game.  She doesn’t have the crazy drama that Lilly’s path has later on, but all around I liked interacting with her from beginning to end more than the other characters.

She's not afraid to show off her more sensual side either. The ability of Emi to show off certain emotions better than the other characters is what sets her apart. Kudos to the animators for making such a memorable character.

I’m so glad my final path was Emi, with that I could go out of the game with a lot of good to remember.  So if you plan on sticking with KS for the long haul I would suggest going 5 – 1 or 2 for the best experience, and for people with less commitment, you’ll get the best bang out of the top 3.  Either way the game is free, so I suggest all of you at least give it a chance.

Also, one last Kenji for the road :

I wish I could talk about the dozens of other things I love about the game, but I don’t want this to be so comprehensive that all curiosity about Katawa Shoujo is lost for those who might not have played.

Big thanks to my friend, Hyper Danny for being a good sport and faithfully censoring the lovely ladies of Katawa Shoujo, and an even bigger thanks to my friend and boss, Steven for cutting out Danny’s head properly as I suck using image programs and for helping me learn how to use these foreign tools.

Also, forgive some of my shots for the frame rate bar showing — Fraps was being a dick the entire playthrough.  By far my worst experience trying to get good shots -_-.

Finally, before any of you think I neglected my musical duties, I’m going to put up some of my favorite tracks to close off.  It’s some pretty heavy stuff though (on the depressing side).

She’s not afraid to show off her more sensual side either. The ability of Emi to show off certain emotions better than the other characters is what sets her apart. Kudos to the animators for making such a memorable character.

One of my favorite images in the game, this comes from her good ending.

When Emi’s feeling crazy about you, she looks damn crazy…

When Hisao is sad, it shows.

Another one of my favorite images, it’s cute watching Hisao feed Rin cut up tangerines.

When Emi wants to be cute, she’s damn cute…

Part of the reason I like Hisao is that he often talks and thinks a lot like I did when I was going after girls in High School.

7 thoughts on “A Week With Katawa Shoujo (NSFW?)”