It only took a week, but I finally achieved a single clear in Outrun, perhaps my favorite of the ‘classic’ SEGA library.

This wasn’t my first rodeo, I own and finished ports for both Nintendo 3DS and SEGA CD.  What changed things up this time around was that the arcade machine in Yakuza 0 has fixed difficulty settings and it’s pretty brutal.

And when I say it took a week, these were pretty big sessions, an average of three hours every day.  The last session when I finally won reached just short of seven hours.  For reference, a playthrough from beginning to end only takes about six minutes.

For me, Outrun has always been a therapeutic outlet.  Clearing it only took so long because I couldn’t focus, my mind was elsewhere.  It’s not only useful for treatment, this is the perfect game for testing mental stability.

END_OF_DOCUMENT_TOKEN_TO_BE_REPLACED

Originally I planned to write this piece earlier, in time for everyone’s favorite romantic holiday.  Shit happens though, and here I am a few days late.  You’re probably wondering why I’m writing about love in a 22 year old game, one that goes out of its way to deliver the happiest ending possible.  You see, I thought about it a little after finishing my recent stream/playthrough and realized that there’s something pretty fucked up in there too.  Before I go there though, the obvious warning : I’ll be spoiling the shit out of the plot.

END_OF_DOCUMENT_TOKEN_TO_BE_REPLACED

The folks modernizing Apogee’s classic shooter, Rise of the Triad are not only making an impressive looking game, but if you pay attention to the Destructoid comments section, you can clearly see the team getting involved and spreading the word on top of that.   I love it when I see development teams really put extra effort into selling their game and getting the word out.

For those who don’t know, the original Rise of the Triad started out as an expansion for Wolfenstein 3D, even using the same engine, until id software had the project cancelled shortly before Doom was to be released.  The project survived on a modified engine and independent story.

END_OF_DOCUMENT_TOKEN_TO_BE_REPLACED

Periodically I run a live stream called 6:00 Inferno.  It hardly ever starts at 6:00 and things don’t always burn, but I play games both new and old, and I’m always in for the long haul.

Previous games include Pikmin 2, ZombiU, the bulk of The Legend of Zelda : Majora’s Mask (an ongoing project), and the online games I play with friends.  My current game is none other than the recently released

The party at Ding Dong Dell is over, and I’m up to date both in sidequests and bounties killed.  Tonight we head south for the desert!  Hope you’re ready for the heat, cause 6:00 Inferno starts in about 5 minutes!

While I’m still writing an article lamenting my childhood ignorance of the Turbografx16 partially because of the shitty marketing and naming that went into its American console, let’s talk about one of the first games I was able to experience thanks to the wii’s virtual console, Bonk’s Adventure!

The first in a trilogy, a spinoff and some ports here and there, Bonk was brought back into the spotlight recently with news of his revival.  We’ll probably never see that revival because Hudson went under soon after the news broke, but considering their half-assed multiplayer in the revival of Dungeon Explorer it might be for the better (More on that game in a future post). END_OF_DOCUMENT_TOKEN_TO_BE_REPLACED

I’m back with more awesome moments and bloopers from my time playing games online.  Fellow editor Prota is also present in these clips along with a couple other friends.  Remember to change youtube’s settings to HD, I still don’t know how to get the embed defaulted to HD yet and the standard image looks like shit!

To start, who likes watching epic battles against a generic big monster?  Who also likes watching the local wizard panic at the last second while all her teammates are down and she’s one hit from dead?  Perhaps you also like White Knight Chronicles 2?  While I’ll be the first to say that the single player campaign (for the WKC2 arc) is shit, there’s a lot of fun to be had if you can get some friends online for multiplayer.

We went into this fight waaaaay underlevelled, and what should have been a 4 – 5 minute battle became much more than that.  Personally, I’m the kind of RPG player that prefers an incredible fight at a handicap to being so powerful that the enemy is decimated.  Those with similar taste might enjoy the show, check it out!

END_OF_DOCUMENT_TOKEN_TO_BE_REPLACED

Just this week Ratchet & Clank was given the PS3 collection treatment like its cousins, Jak & Daxter and Sly Cooper.  When these three trilogies came out originally, I was getting exhausted of playing so many platformer games and ignored them.  I’ll be honest : I’m still trying to plow through the Jak saga and only bought Ratchet so that I could get my hands on the Sly 4 demo.  That series only caught my attention when I finished Infamous 1/2 and wanted to play other games developed by Sucker Punch, and I loved my Sly Collection ever since. 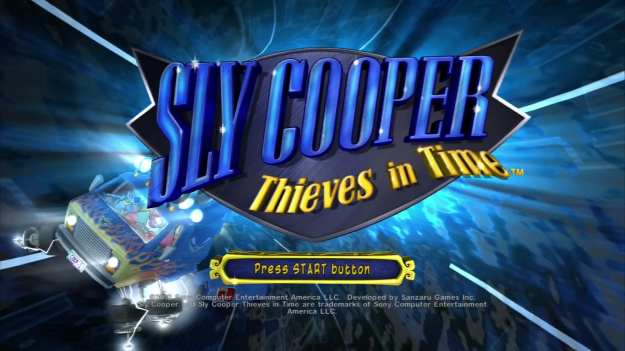 That brings us to Thieves in Time.  Sucker Punch passed the development baton over to Sanzaru Games, the team responsible for remastering the original trilogy.  This demo is short, and frankly, hasn’t convinced me that I should purchase this game at launch.

END_OF_DOCUMENT_TOKEN_TO_BE_REPLACED

While some of you guys were just hearing the shitty news of an iOS port of The World Ends With You, I was in the middle of a great gaming night with my buds.

Because of its lukewarm reception from critics and abundance of other options, we held off playing White Knight Chronicles for quite a while.  It even took a little convincing before our teammate, Soma would buy a copy.  Last night was all about bringing him in for our first night of questing together.  What better initiation is there than finishing a quest that we previously finished illegitimately?

END_OF_DOCUMENT_TOKEN_TO_BE_REPLACED

Sandbox games are not typically the most enjoyable experiences for me.  Aside from Infamous 1/2, Red Dead Redemption, Crackdown…. alright, maybe it’s just GTA that I think sucks ass.  Those early trailers got me pumped really fast, and the game was quite well advertised.  There’s no Wei they could fuck up a game like this, right?

Just to get it out of the Wei, the protagonist, his name is Wei Shen, and yes you can expect a bunch of shitty puns in this review.

END_OF_DOCUMENT_TOKEN_TO_BE_REPLACED

Some people, namely Prota believe that I have a certain fascination with objects of the box variety.  It’s an ongoing joke cause I was stuck playing the Wizard in a multiplayer playthrough of Trine.

For a brief moment, I thought Darksiders 2 was playing with me, the boxes apparently coming to life.  Thankfully I was wrong, but it kinda scared the shit out of me when I spent the whole clip focused on the shaking boxes.

How the fuck did I miss this?  A reboot of Rise of the Triad?  Dog mode and weird floating platforms making a return?  Graphic killing of Nazi soldiers as they beg for their lives using modern visuals?  Consider me pumped!

Originally intended to be an expansion to Id’s hit, Wolfenstein 3-D, RotT was designed for that particular engine.  When Id dropped that plan, possibly because Doom would be looming around the corner, it was instead developed as a whole new game running on a more modern engine.

That’s good, because Wolfenstein 3-D’s engine wasn’t really suited for outdoor environments which is a big part of this game’s atmosphere.  What resulted is a pretty gory game for its time where people would regularly blow up.  Because height was no longer an issue like it would have been as an expansion, we see a whole bunch of trampolines that take advantage of taller rooms.

END_OF_DOCUMENT_TOKEN_TO_BE_REPLACED

I remember once in composition class, my professor mentioned something about Rock of Ages while telling one of his old stories (the guy’s at least in his 70’s), tipping me off that there might be some other, probably more popular work that shares the same name. Sure enough, a Google search is more likely to direct you to a musical or movie. I never was into theatre, so don’t be too surprised when I say that it was the game I first heard about before the production.

While titles are shared, thematic content is not. Our game does not revolve around a timeless musical genre (there isn’t even rock in the soundtrack). Instead, the title is to be taken more literally; it’s about one man and his giant boulder traveling through different time periods and doing battle with various historical figures throughout Europe. 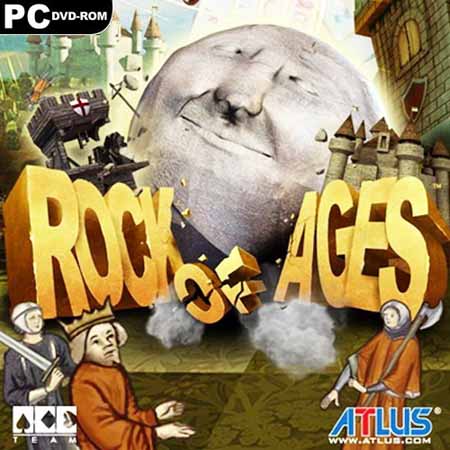 Any of you guys remember those old JibJab political cartoons which while slightly funny, started a trend of manipulating still pictures of people so that they appear to be talking or performing various actions? Imagine that treatment with authentic historical art styles and you have just about every cutscene in the game. While in play, units, buildings and the overall scenery on the playing field are three dimensional models. On the other hand, all human characters including the ones controlling the boulders from behind castle walls and the giant human hand that places the boulder back on track if it falls off are presented as paper cutouts.

END_OF_DOCUMENT_TOKEN_TO_BE_REPLACED

I figured I would share a sample of the wonderful voice acting that can be found in Gabriel Knight 2 — Enjoy!

P.S.  Don’t expect a review for this one anytime soon, I’m progressing slow as shit and have other games I’m playing at the same time, but at least now it’s easy to share captured images and audio of the games I am playing currently, so expect me to post up things I find funny every now and then.

Aside from the RPG there is one genre of games that have always managed to stimulate my imagination better than any other. The point and click adventure has been a regular part of my diet since King’s Quest 7 which introduced me to the genre soon after it first came out.

Usually, puzzles that stump me for hours are the intimidating factor that keeps me from jumping between adventure games regularly, but some more user-friendly games such as Telltale’s fantastic Tales of Monkey Island and Sam & Max alleviated my fears and I felt that I could survive just about any adventure game without seeking help from hints or guides.

Gabriel Knight : Sins of The Fathers beat my pride into the ground.

END_OF_DOCUMENT_TOKEN_TO_BE_REPLACED

Here’s the transcript for the second Rapid Composition exercise where I again work with an 8-bit style, restricting myself to just two square channels and one for triangle.  The notation is probably sloppy as all hell, but remember that this was written in 90 minutes.  Also, I encourage anybody interested in composition to join in : the only things I want to have provided for the article are a link to the music, preferably something I can embed like Soundcloud and some visible notation, whether it’s done on traditional score, box notation or whatever.

12:43 Suikoinfinity:
Hello again and welcome to the second week of Rapid Composition where I am suddenly given a theme carefully selected and then given 90 minutes to come up with a piece of music to accompany that idea!

12:44 Suikoinfinity:
Last week we did some underground exploration, who knows what we have in store for this week, but at the turn of the hour, my fate shall be revealed!