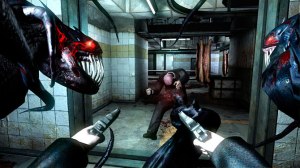 2K Games boss Christoph Hartmann stated in an in-depth interview with Gamesindustry International that games should inspire to capture a type of photo-realistic emotion that movies tend to display much easier than games do. He feels it’s the only way to open new genres in the gaming industry.

In the article he stated “Recreating a Mission Impossible experience in gaming is easy; recreating emotions in Brokeback Mountain is going to be tough, or at least very sensitive in this country…” He mentions that shooter genres are pretty much the main focus, if only because the emotional focus of such a genre are slim to none and that, for now at least, it’s okay on consoles. He cautions though that “To dramatically change the industry to where we can insert a whole range of emotions, I feel it will only happen when we reach the point that games are photorealistic; then we will have reached an endpoint and that might be the final console.”

Do you guys agree with Hartmann? This writer thinks that this type of approach is great for games going for a more realistic feel. But his idea that all games should follow this philosophy is just a whole bunch of bull. Games are suppose to be diverse and not crave to be like movies (which he believes games should catch up with). Similar to how some want realism, I want some dream-like visuals, not something I would see in this world. How do you guys feel?