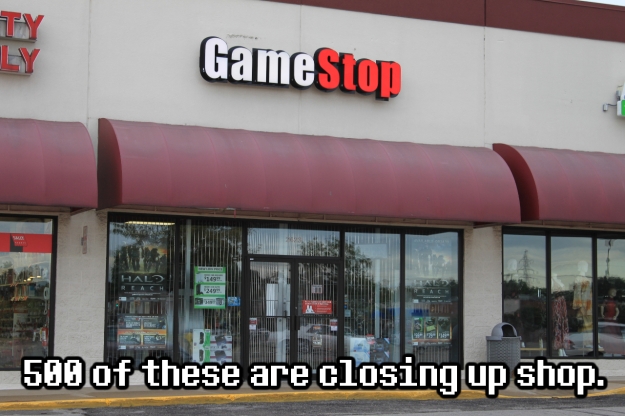 Ah GameStop, a store with a storied history with many of us here at The Wired Fish.  Gamestop’s annual sales report came in for 2012, and it’s not pretty. Gamestop sales took a hit last year with more people getting their games either online via Amazon or Wal-Mart, downloading digital versions of games, or getting their used game fix from Target and Best Buy. There’s also Gamefly and its slow, but useful, rental service for checking one’s doubts about a game. And in the wake of rumors of Anti-Used game features in the upcoming PS4 and Xbox Durango, the bread and butter of Gamestop’s business, the heat is on for the used game giant.

And of course the many, many stories online of people’s horrible experiences with Gamestop, whether its shopping there or working there. From the bullshit price for selling games to them, to the bullshit price of them selling back your game. From the constant hustling of its GameInformer subscriptions to the constant hustling of pre-orders. From the annoying kids and dumbass parents, to the stench of nerd heat that permeates across the store. We can all say with the utmost of confidence, “we saw this coming.” About 500 stores will be closing up nationwide this year. While it’s nice for some to hear such news, there are people that run those stores, and that’s a lot of jobs that are going poof. Given the employees are treated like shit by the managers and district managers, at the same time these guys might need the little money they get from the store. Or maybe they’re happy to leave their hellhole of a job for greener pastures.

This should be a sign to the managers and DMs of the remaining stores: treat your employees and your customers with some respect. It’s a couple of the factor contributing to your downfall.And shoppers, keep your eyes peeled ’cause there’s a good chance those 500 stores are going to have a Going Out Of Business sale, and GOOB sales tend to have some deeeeeep discounts.

Thanks to our Cameraman Gesfrid for the tip.

About 500 GameStop Stores Going Out Of Business [Playstation Gang]