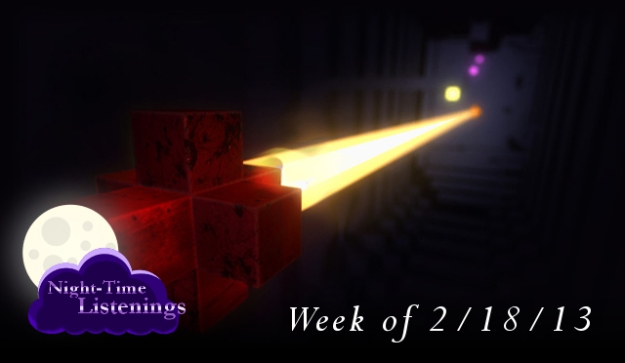 The second week of Indie Love Month commenced this week. We turned the beat back with Bit.Trip Core. We made beats with Soundshapes. We bounced a ball around with Shatter. Dodged a plethora of missiles with N+. And finally we changed back and forth with Giana Sisters: Twisted Dreams.

A new week is here, and the indie love continues with Bit.Trip Core. Ah Bit.Trip, a series that challenged gamers with each entry with unique styles of gameplay centered on singular modes of control. Beat challenged players to tilt the Wii remote like a sideways dial, moving the paddle back and forth like Pong. In Core, the main focus was the control pad. As “beats” crossed paths in the middle cross’ line of fire, the player would press that direction and press “A”. The Bit.Trip series began at the height of two movements: The Retro Revival and Music Game revolution. Developers Gaijin Games two cues from both to create a crisp, retro, almost Atari-like game and combined it with catchy and thumping chiptune music. So then, of the 6 entries in the series, which one is your favorite?

So for this entry, I have to use gamplay for the music since, well, music is the gamplay in Soundshapes.Considered by many to be the best song in the game, Every piece of the song (like others in the game) moves something. From the “ahhhhhhh”s to the “move a little”s, no instrument is wasted. Taking cues from artwork you’d see on, say, snowboards, albums, notebook sketches, etc., it’s like playing an interactive music video. Some say that the music genre has died. I don’t think so. Instead, it’s simply moved from plastic instruments to more traditional means of control. So games like Rhythm Heaven, Bit.Trip, and Soundshapes have a place in today’s game space. So then, what’s you favorite song in Soundshapes?

The song that almost single-handedly got me into electronica/dance, the moment I heard this song via SupraDarky’s Best VGM series, I had to find out what this game was. The moment I saw what it was, I knew right away I had to get it. I listened to more of the music of the game, and rest assured composer Module did some good stuff. I featured this song once before on NTL back in 2011, but that was on the old format that didn’t last for long. But now that time has passed, the song’s had its chance to sink in. You can read up how I felt about it on the main site. Today, it’s still a pretty addictive song to listen to, what with the almost hypnotic Aquestone voice, prominent drums, and those chimes in the beginning. So then, what was your highscore in Amethyst Cavers?

Hoo boy we’re going way back to the early days of the Xbox Live Arcade! N+, an upgrade to Metanet’s N, was a really hard game that challenged your platforming skills to avoid many traps and projectiles, collect gold for time, and flip switches to open doors. Many rage quits were had with this game, especially with me. Given I didn’t break the controller, but I had to take breaks to clear my head and rest my reflexes. As for the music, Killzone composer Joris De Man ops for a more simple but surreal composition, tying it with the setting of N+. All together, it does feel like you’re in a test chamber for some maniacal scientist doing ninja experiments. Now then, how many levels can you got in N+ before quitting?

And finally I can showcase a song in this game. For those not aware, Giana Sisters Twisted Dreams is part of a really old franchise that got a new lease on life recently with Giana Sisters DS. Spellbound became Black Forest Games, and they made another Giana Sisters game. This time players can switch back and forth between Giana’s Cute side and Punk side. The cool feature to this is that not only does the world change around her, so does the music, going from a more fantasy-like arrangement to heavy metal riffing. The metal side is done by Machinae Supremacy, whose Giana Sisters remix a ways back got the attention of the developers. So they got signed on to do all of Punk Giana’s music. So then… I think I’ll throw an odd question in. Of the two sides (Cute and Punk), by any means necessary, who would win in a foot race to the end of a stage?