Fun fact: this was originally the subtitle to that CG Final Fantasy movie from a few years back. OH, HISTORY SLAM, TAKE THAT, SQUARESOFT’S LONG-DEFUNCT FILMS DIVISION!

For a while now, Shinji Mikami, the man behind Resident Evil (among other things) has been teasing his new game, previously code named “Project Zwei”, because Mikami likes English like we like syphilis.

The announcement came through this morning that the project is in fact a survival horror game called The Evil Within. It’s being billed as “A return to TRUE survival horror” and “The perfect blend of action and horror.” The game is to be published by Bethesda Softworks and is being developed by Mikami’s studio Tango Gameworks.

Details on the game, actual-play-wise, are still pretty scarce. Initial ideas seem to indicate that Mikami wants something a little more horror-oriented than the last several years of this kind of game. But other than that, well, we know it’s all survival-y and horror-y, and then there’s the trailer. It’s…well, take a look.

It feels like I’m watching a commercial for American Horror Story: Asylum. In all fairness, the thing is well produced and relatively creepy, although if one is to draw what the game will be from this, it appears to involve decorating inmates with non-traditional, yet still aesthetically pleasing sharp things while a spider-woman sits on the window and criticizes your work. Or at least, that’s what it looks like… 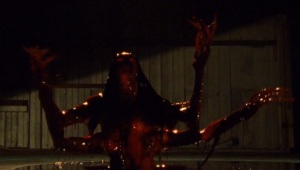 OH LAWD, FLORAL PATTERNS, CAN I GET A HALLELUJAH!

All my jaded bitterness aside, I can’t deny the appeal of a good ol’ fashioned scare fest. As I’ve said on the podcast, I kind of miss the old guard of survival-horror. Where monsters were threatening, capable of killing you at a moment’s notice. Supplies were scarce, and you didn’t have access to a rambo-arsenal of weapons. You know, the horror of surviving against something way more deadly than you. And if Mikami can strike that balance again, make it exciting and terrifying, then I’m ready for some inner evil action…