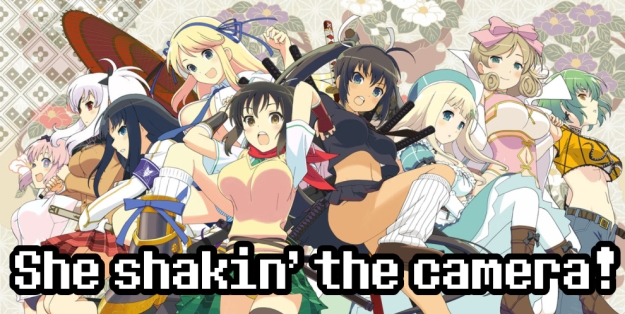 So if you’re like me, you’re balls-deep into Senran Kagura Burst. You played some missions, unlocked some sexy outfits, and picked out a favorite shinobi (mine’s Haruka if you’re wondering). However at some point during your bedazzlingly bodacious adventure, the camera can’t quite seem to get its act together. In other words, the camera just ping-pongs back and fourth. At first it’s a nuisance, but it gradually gets worse. For me, I was playing as Haruka (of course), and for some reason the camera started acting up. Since Haruka runs really slow, I thought it was probably her run speed that made the camera not know how to track her. This turned out to not be the case since I later played as Hikage, who’s much faster, and the camera was still glitching out, and this time it was much worse. When facing enemies, the camera’s all fine. But when moving on to the next wave, it begins to spaz out, only to correct itself when the next wave begins. Lather rinse repeat.

So in looking for a fix, I came across a GameFaqs thread that shows you how to fix it. It also contained a video (below) that talked about the camera shaking. So here’s what I did after taking their advice. First I exited the game and returned to the Home menu, followed by turning off the 3DS completely. I kept it off for a minute just to be safe since you never know when a device is still reading off an SD card (that’s just me though, you probably don’t have to wait). Afterwards, turn it back on, load up Senran Kagura Burst, then replay the same stage that you saw the glitch at its worst (any stage will do either way, but it’s a good way to check), and the same character you played as (or any other, same reason as stage). The screen shaking should finally stop glitching out. If it doesn’t, then I don’t know what to tell you. If it does stop, then awesome! So now you know how to fix this issue should the camera act up again during gameplay.

Still, I don’t know why this happens and why turning off the 3DS fixes this. This seemed to be in the Japanese version as well, so it seems like developer Tamsoft never bothered to fix it when they got XSEED’s translation. I’m leaning on agreeing with commenter Zedev that it might be memory leak, but I guess I’ll explain my side and give you guys a resource to use to help in figuring this weirdness out. Whenever I’m playing a 3DS game, I never really bother to exit the game unless I’m forced to to use another app or play another game. I just put the 3DS to sleep mode and never close the game. Senran Kagura Burst was no different, and that one was loaded up for a little over a week, and it was today when the camera started acting up. And it can’t be the SD card doing this since, like I said earlier, this happens on the Japanese version too and that one is a physical game instead of digital. Also, this started roughly after I began the Hebijo side. The whole week SKB was loaded, I only played the Hanzo side to unlock as much as a I can before moving on.

And that’s all I got. If anyone knows what up or have anything to add to this mystery, hit up the comments below.