Originally I planned to write this piece earlier, in time for everyone’s favorite romantic holiday.  Shit happens though, and here I am a few days late.  You’re probably wondering why I’m writing about love in a 22 year old game, one that goes out of its way to deliver the happiest ending possible.  You see, I thought about it a little after finishing my recent stream/playthrough and realized that there’s something pretty fucked up in there too.  Before I go there though, the obvious warning : I’ll be spoiling the shit out of the plot. 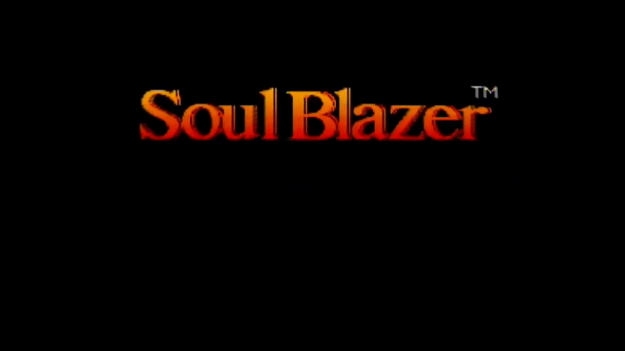 For 90% of the Soul Blazer experience, romance is something is a topic that doesn’t have the opportunity to spring up because it’s spent killing enemies, restoring the world and interacting with too many npc’s to get a feel of any kind of relationship.  The topic of romantic love doesn’t even spring up until the last area of the game, not counting the final dungeon.  All of a sudden it feels like everybody’s hooking up like this soldier and maid who are facing each other until you walk through the door at which point they immediately turn away like nothing happened.

Some dust my ass…

You also meet this blue-haired fellow who tells his story of falling in love with a woman who took care of him while he was injured, but being unable to tell her his feelings.  The song that he plays is one that he wrote for her.

It’s one of the sweetest gestures in the game, and from that point on, I was waiting to see them hook up.  The girl whose name is “Something like Lisa” turns out to be one of the major characters in the game.  Me, playing the role of “JamesII” one who serves”The Master” found myself rooting for him!  I mean, after all this is done I’m returning to the sky; I have no time for that love shit, why not see these humans unite at least? 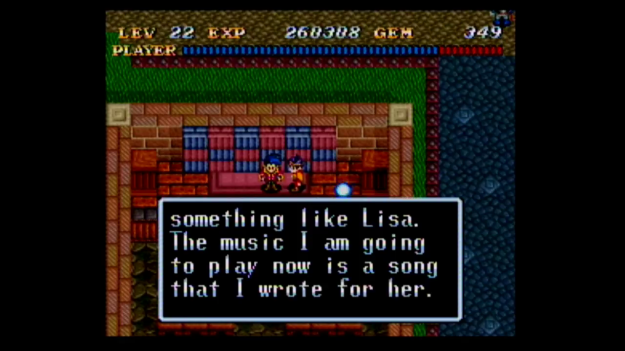 He doesn’t remember her name 100% but the feeling is still there!

In the last parts of the game it becomes clear that Lisa has a little love brewing as well, except it isn’t for blue haired man, it’s for my avatar, JamesII!  I imagine the feeling I had was something like if a beautiful girl my friend was chasing suddenly dropped the bomb that it was me she wanted.  Who do I root for?   A difficult choice made easy : JamesII is soon to leave, permanently.

It’s not the songwriter she’s longing for…

Of course, the world is saved and you make your departure as she sleeps.  The epilogue, text against the backdrop of  a beautiful sunset with scrolling clouds appears followed by a fade to black and the credits along with a familiar tune : the one written by blue hair, no longer representing his love for Lisa but Lisa’s love for JamesII!  And the biggest slap in the face to our unnamed artist : there’s a post credits scene where JamesII starts acting funny and gets sent back to his girl with the loss of his memory.

And she doesn’t mind his memory loss one bit.

Yeah, it’s a happy ending, but just thinking about that blue guy sing his heart out is heartbreaking.  I mean just look at the passion in one of the frames of his singing animation :

The face of true love.

And to make matters worse, in the American version, all we know about is the instrumental version that plays in the game, but in Japan there’s a vocal track, I’m not sure if it plays in-game or not, but it is an official variation and further emphasizes how lonely this guy is.  His only purpose is to help get an item to continue the game, afterward his influence is completely brushed aside but I won’t forget.  I salute you, blue haired musician.