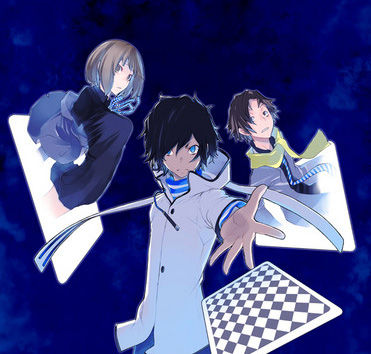 The week’s Famitsu revealed that Atlus is currently working on a sequel to Devil Survivior, a DS RPG released in 2009. Not only that, but Famitsu lists the game at being 95% complete! The story follows three classmates who gain the power to summon demons. They must use this power to stop mysterious entities known as the Septentrion, who attack Japan one Sunday and follow suit each day after. The cast only has seven days to stop them.

Shinjiro Takada, the game’s director, promises that the new game will feature more major cities, rather than just Tokyo, improved gameplay, and be a game that can be played repeatedly. There’s also a new “Enshi System” which has to do with the level of friendship between you and the other demon summoners. As you raise your friendship with party members, they will acquire new abilities. The main cast is said to be 13 characters strong, all designed by Suzuhito Yasuda, so the main character and his two classmates are only our first look into the cast.

I can see that Atlus wants to keep the same “clock is ticking” atomsphere that the previous game had. I don’t mind since that was one of the most thrilling aspects of the story. I, along with all of my friends who’ve tried the game, really enjoyed the first Devil Survivor. It was an interesting blend of strategy and turn-based battle systems that I found to be quite fun. The previous game had multiple endings and scenarios, which already gave players a reason to play it again, so I’m curious as to what the director has in mind to add more replay value. Regardless, you can bet I’m going to keep my eyes open for more information on the game.

Devil Survivor 2 is slated for a summer release in Japan for the Nintendo DS. Atlus has a good track record for getting games localized, so hopefully we can expect a stateside release sometime after. If Catherine can make it over here, then I don’t see why this game won’t.