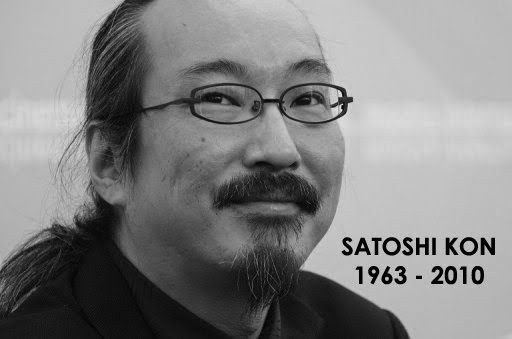 One of the greatest minds in animation history right there...

“With my heart full of gratitude for everything good in the world, I’ll put down my pen. Well, I’ll be leaving now.”

– The last words of Satoshi Kon’s final address, posthumously posted on his blog by his family.

One year ago today, on August 24th 2010, the world of Anime lost one of its truly gifted and visionary creators when Satoshi Kon, the man behind such mind-bending works of art as Paranoia Agent and Perfect Blue, passed away at 47 after a mostly private battle with pancreatic cancer. He left behind a legion of mourning fans, instructions for the completion of his final film The Dreaming Machine, and a legacy of some of the most creative, wonderful, and boundry pushing animation ever put to film.

With every bit of animation he gave to us, he gave with it something incredible. With Perfect Blue, he gave a hallucinatory murder mystery that could only be delivered through this medium. With Paranoia Agent, he gave a thoughtful, in depth, hilarious and frequently terrifying look into the psyche of a world unable to cope with hardship, and the consequences of said denial (and rest assured, that show’s day will come in my “Anime Theater” column). Tokyo Godfathers presented, of all things, a heartwarming comedy, and managed to stay just inside the lines of plausability while making something as simple as returning a baby feel like a grand adventure of personal discovery, and showed that Kon was not limited to head spinners. And Paprika, well, Paprika is creativity unleaded.

As spectacular as those works are, each one deserving their own segments, there is one that I hold above all others. I am speaking of Millenium Actress (Sennen Joyu), arguably Kon’s finest work and in my humble opinion the single best animated film ever created.

I should tell you right now: I love this movie, I believe it to be spectacular in every way, and have since I first saw it in 2008. So if you want to know a score, then the answer is “10”. This article is less a “picking apart” of the work and more a “gushing list of the reasons it is so great”. I will of course analyze the film, but just be aware of what this article will entail. I will pay tribute to the man by taking a good, reverent look at his magnum opus, and hope that it will give you an idea of the greatness that has gone from this world. 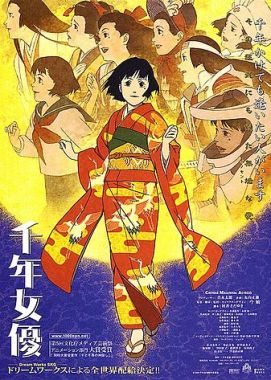 An Act For The Ages

We start in our story in modern Japan, where director Genya Tachibana is doing a documentary on famous actress Chiyoko Fujiwara. Ms. Fujiwara is a recluse of sorts, living in the mountains of Kanto with no one but a housekeeper to keep her company. Tachibana proceeds to her home, with his cameraman Kyoji Ida in tow, to conduct a rare interview with the former star.

As they sit down and begin to speak, we are treated to flasbacks of Chiyoko’s life, from her birth during the Kanto earthquake of the 1930’s, to her childhood and adulthood during the age of fascism in Japan. More specifically, she makes mention of a man, a political dissident and an artist, that she met when she was a young girl, and how she hid him from the police. This man would flee soon after, leaving behind nothing but a key and some mentions of his goal to return to his homeland. Chiyoko reveals that it was this incident that inspired her to become an actress, so she could pursue the mysterious man and give him back his key.

This, in itself, would be a pretty interesting tale to spin. However, having been an actress for so long and not having a 100% clear memory of events, the flashbacks alternate between actual memories and others that are actually scenes from her films that reflect some aspect of her life at the time. Her first attempt to catch up to the man as he leaves on a train is shown as a scene from one of her early romance films. Her search for him as she dodges the police who question her about his whereabouts are shown as scenes from a movie in which she plays a samurai princess searching for her captured prince.

Although they are her flashbacks, both Tachibana and Ida are injected into them. Ida, amusingly enough, remains an anachronistic cameraman throughout, simply filming the proceedings while wondering what the hell is going on. Tachibana, on the other hand, actually takes the form of a support in whichever movie is serving as the setting: A kindly rickshaw man, a loyal vassal, and so on. Through these flashbacks, we get a picture of Chiyoko’s already extraordinary life juxtaposed against her equally extraordinary film career.

A Life in Film

Due to the inherently unique nature of the storytelling, the movie is a veritable smorgasboard of memorable images. From Chiyoko riding a horse through a cloud of smoke to her encounter with a spectral hag, to something as simple as emerging from a shelter after the  bombing of Kobe, the whole movie is brought to life by absurdly smooth and detailed animation. Not a single facial expression, or splotch of dirt, or environmental flourish is wasted.

And yet, despite how disperate all the above examples were, they all fit perfectly in the context of the story. Even as we are enjoying this adventure, we never once forget that we are also seeing the psychology of Chiyoko even as we are seeing her life. Every movie scene, from the mundane to the epic, is a reflection of her mental and emotional state at the time it was filmed. A simple shift from a dark wooded area in ancient Japan to a sunny, industrial town of the 1950’s tells us more about her character than any exposition ever could. It serves to, quite literally, illustrate the world she has lived in.

This visual mastery is supported by one of the most perfect soundtracks ever to grace a film. Susumu Hirasawa, who also did the soundtrack for Paranoia Agent and Paprika, makes the score of his career here. Taken on it’s own merits, the music is absolutely gorgeous, such as this painfully beautiful number that serves as a theme of sorts to Chiyoko’s relationship with the “Man With The Key”.

What makes the soundtrack utterly magical, however, is how well it fits with the visuals. The reason for this is because Kon actually would tell Hirasawa what the mood or purpose of the scene is, let him compose the score for the scene, and only then would he draw up the scene while listening to the music, letting the music affect how it was paced, how it looked, etc.

The result is a synergy between visual and audio that has to be experienced to be believed. Scenes crackle with life, with the music perfectly reflecting the emotion of what is on screen. If the purpose of a soundtrack is to enhance the mood of the piece, then this just might be the perfect soundtrack.

I could go further, about the story, the characters, but I feel that I have said enough that you will realize that you must go out and experience this for yourself. What I can say as a conclusion is that Millenium Actress succeeds not only because of its quality as a story, but because of its perfection of its form. With its use of mood, character, and constantly shifting visual taste, it is not a story that could have been told without using animation, and animation alone, to its fullest extent. No complex CGI in a movie, no flowery words in a book, none of it could tell the story the way this animation does.

When one makes the decision to enter any kind of expressive medium, be it writing, artwork, animation, videogames, movies, they must go in realizing the limitations of their chosen form. With writers (like me), we must accept the written word’s inability to describe certain sights or emotions. With artists, they must accept that the visions of incomparable beauty they see before their eyes will never be properly translated to canvas. And for animators or movie makers, they must accept that their vision will never be the exact same on screen as it was in their heads or their hearts.

Satoshi Kon was special because he came closer than quite possibly any other living artist or animator, even legends like Hayao Miyazaki or Rin Taro, to breaking that barrier between what we see in our heads and what we see on screen. His movies are undiluted in their purpose, using every tool available to their fullest in order, not to make a statement or to be different, but to translate the untranslatable. To tell a story in sight and in sound that can usually be told only in soul. To express complex ideas and feelings and dreams in a way that only this most complex and capable of mediums can.

Perhaps the most telling thing I can say about Satoshi Kon is that, when I heard the news, I felt a sense of loss, not only for the death of another human being, but the loss of what he might have done in the future. It truly saddens me that, once The Dream Machine has been completed, there will be no new works of Satoshi Kon to look forward to, his genius lost to the world save for his (substantial) legacy. And although there are a great many animators who do indeed use animation to its fullest strength, none of them will ever be able to quite as well as he did. The world of animation, of expression, and of storytelling, is a darker place without him. And he will be forever missed…