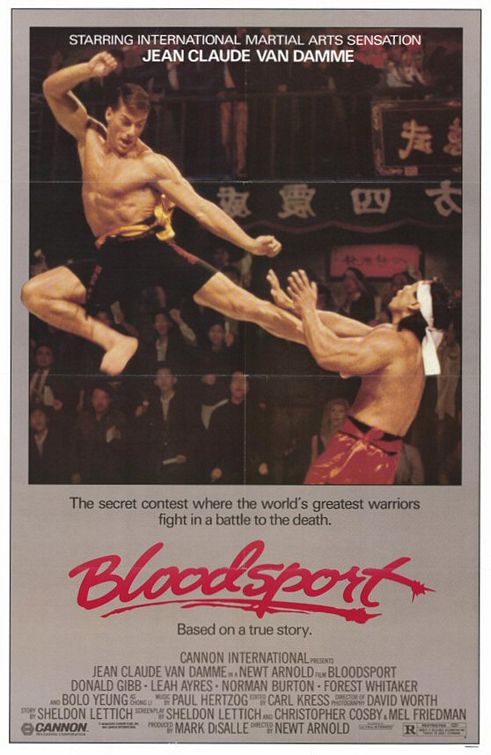 The “American Martial Arts Flick” is certainly a unique creature. It exists as an imitation of its China-born brethren, and is typically held in far lower regard by the general fandom. However, if one were to delve into the world of these misfit animals, they would find a fanbase there just as loyal as the legions of the Hong Kong faithful. And you might even find yourself growing a certain fondness for them as well, if you give it a chance. The way I see it, the American breed can almost be seen as the “store brand cereal” of the Martial Arts world. They lack mascots, uniqueness, and generally cannot recreate the combination of taste and texture that makes “Lucky Charms” and the like so popular. But in tasting it, you understand why there are fans of it, as the cereal has it’s own unique charm.

Using this incredibly rational philosophy, I decided to take a dive into the world of American martial arts. I had of course been exposed to the works of Steven Segal and the like throughout my younger, less martial arts-centric life. But now I was going to watch them with my new, Hong Kong weathered eye. Although there are many choices one can make when scanning for such items, especially ones circa the late 80’s to the early 90’s, I decided to start with Jean Claude Van Damm’s 1988 opus, Bloodsport.

All Our Dux in a Row

First of all, let us take a moment to discuss movie inspiration Frank Dux.Allegedly, Dux made a name for himself in the late 60’s/early 70’s by participating in a number of semi-illegal fight tournaments, called “The Kumite”. Dux was apparently a sort of God at these, holding a number of records in different aspects of the tournament and retiring undefeated. He then founded his own school of martial arts called “Dux-Ryu” and has thousands of disciples to this day, if not tens of thousands.

Now, the credulity of Mr. Dux’s claims has been challenged over the years, but that is not what we are here to discuss. We will be looking at the movie as its own entity, nothing more and nothing less. That said, let us move on to the goofy masterpiece that is Bloodsport.

We start with Frank Dux, American soldier extraordinaire and martial arts maven. As a child, he once tried to break in to the home of a local “Japanese” family (I say “Japanese” because they are played by Chinese actors). He is caught by Master Tanaka, and his son Shingo. After showing that he has some mettle, young frank is offered a place as one of Tanaka’s students. After a rocky beginning, the little man becomes as family to the Tanakas, and grows up alongside Shingo.

As a note, I would like to mention that the child actors are absolutely terrible. The young Shingo can’t act, and I don’t know if the actor portraying young Frank was born with that accent or put it on for the movie, but the fact that it makes him sound exactly like a young Jean Claude Van Damm makes every word absolutely hilarious. I know that these are kids, and especially back then not much was expected. But we damn near skirt “Jake Lloyd in Star Wars: Episode One” territory here.

YOU ARE CANCER WITH A SMILEY FACE!

Unfortunately, tragedy strikes when Shingo is struck down by…something, they never make it quite clear. With this, the Tanaka line is broken, and the family techniques are doomed to fade into history. Frank, now a young adult, wishes to ease the pain of his shidoshi (hard to define, but it very roughly translates to “guide”) and to wit offers to take on the family teachings. After arguing for exactly one second that Frank was not Japanese, Tanaka agrees, and a training montage shows Frank using all the techniques he will very obviously be using in the rest of the film.

This was all in the past, though. In modern day, Frank has broken away from his military overseers to visit his ailing shidoshi, and promises him that he will fulfill Tanaka’s dream to have a student of his win “The Kumite”, a world-renowned free-form fighting championship held in the Kowloon Walled City in Hong Kong every “X” amount of years. But things won’t be easy. In the ring, he’ll have to contend with other top fighters, including a Sumo Wrestler, a brutal Muay Thai fighter, and a crooked Middle Eastern brawler. Most formidable, however, is the brutal Chong Li, the current Kumite champion, and a man of immense brawn and skill. And outside, although he has the support of his new friend Jackson, he must evade the pursuing American agents and the wiles of a curious reporter here to see what this “Kumite” is all about. Can Frank overcome all these challenges and fulfill his teacher’s dream? Or will he be crushed under the heel of the mighty Chong Li?

Chong Li will fucking EAT YOU!!!

Jean Claude Van Damm, the “Muscles from Brussels” himself, is in top form here as Frank Dux. As in his later works, it’s kind of hard to understand a damn. Word. He. Says. Despite the goofiness of the accent, there’s just a wonderful, loveable charisma about him, and he is definitely my favorite “non-Chinese” Kung Fu star. It helps that he makes a really good on-screen fighter, and has kicks for miles. Seriously, this man’s legs are absurd.

Frank Dux is enraged when the Sumo refuses to talk to his hand. Frank Dux PALM!

As for other main heroes, we have Leah Ayres playing Janice Kent, a would-be reporter who aims to bust the story of the Kumite wide open, but simply serves as a damsel at some points, and whiney bitch other times. You can forget her. Then you have the two agents chasing Frank, Helmer and Rawlins. They would be forgettable, their only part to unsuccessfully try to capture Frank, if it weren’t for the actor playing Rawlins. Said actor is none other than future Academy Award winner Forrest Whitaker in an early role.

Probably the supporter who is most important story-wise is Donald Gibb’s Jackson, Frank’s fellow, er, “American” competitor. Some of you might remember Gibb as “The Ogre”, the giant fratboy-turned-ally of the nerds in the “Revenge of the Nerds” series of movies from the 80’s. His large frame makes him suitable for his role as the heavy hitter Jackson, who is all power and no finesse. Jackson is a giant walking stereotype, a white trash, beer guzzling, woman chasing, ignorant doofus who, despite not being overtly offensive, is a real sign of this movie’s age. He aims to beat Chong Li and claim the title himself, but spends most of his time marveling at Frank’s feats of skill.

But despite all the good Jean Claude does, the show is utterly stolen by Bolo Yeung’s Chong Li. The performance by Bolo is so utterly enthused that you can’t help but love every time he’s on screen. Bolo was actually a body builder before he got into Kung Fu movies, which explains his hulking frame. He was getting on in years by the time this movie was made, and he had slimmed down a bit, but he’s still a giant man with a beefy musculature. This appearence makes him well suited to villainous roles, and he shines here. Chong Li is a hulking monster of a villain, all sneers and viciousness.

Would you believe that this man was in his 40's when they made this? That is not a 40 year old mans body!

He only talks three times in the film. That’s it. And they’re all growled out masterpieces of trash-talk that are ill-pronounced and infinitely quotable (“You are necks”, brought on by a poorly pronounced “next”, is my personal favorite). When the time comes to fight, Bolo shows that he’s still got it, performing some satisfying kicks and grapples mixed with huge swings of those tree trunks he calls arms. He ain’t complex, not by a long shot, but he’s easily one of my favorite Kung Fu villains.

Which brings us into the fight. One of my issues with American Kung fu flicks is a high frequency of cuts, meaning how many moves are shown before the camera cuts to another angle. Look at all the complex movements in any given fight scene, see all those precise movements, and think how they have to do all of them perfectly or else the take has to be redone. Pretty staggering, huh? I understand that the 20-move monstrosities of the likes of Chang Cheh are not to be expected here, but it’s still distracting. An unfortunately timed cut can take you right out of the action. Luckily, although the cuts are noticeable, the fights themselves are well choreographed and reasonably fast, with a multitude of different fighting styles offering entertaining visual comparisons and varied fights between well-matched opponents.

Finally, the music itself must be mentioned. The whole thing is wonderful, with industrial synth the way only 80’s films could. The soundtrack highlight, besides some terribly awesome 80’s rock, is the battle/training theme “Fight to Survive”, who’s pounding bass and addictive chorus of “Kumite, kumite, kumite, kumite” chanted like some tribal sacrifice, make it one of the best of it’s kind. I have been kind enough to include it here and you owe it to yourself to listen to it.

Is Bloodsport a great movie? No. Is it a good movie? Yes. It is fun, ridiculous, and cheesy. Everyone is silly and over the top, and it’s all pulled together by solid choreography. I could sit here and tell you how it’s fights aren’t as long as others, or its acting is bad, or its cutting it lame. But you know what? None of that matters when the film is so damn fun. Those who can stomach some ridiculous martial arts action, with the least American soldier this side of Arnold, then step right up. The rest of you go somewhere, you joyless asses.