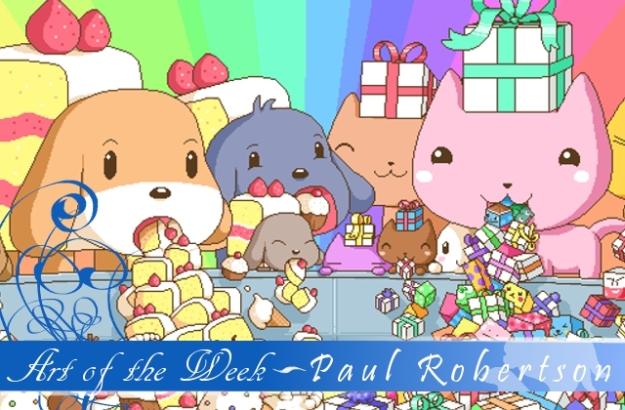 You may not recognize his name, but you most likely have seen his pixel art (or played a certain beat-’em-up game with his art). Paul Robertson has been involved with many forms of media, including music videos, commercials, videogames, and the like. Hailing from Australia, Paul’s artwork is very, very colorful and energetic. His main base of operations is on the blog, The Mecha Fetus Visual Blog. The subject matter of some of his works can actually be very macabre nature, contrasting the lightheartedness of his artstyle. While I really can’t show most of his artwork here, he has a plethora of nsfw art that in a sense is… fun. It’s really hard to describe the sense of freedom that you can see in his art, especially in some videos and gif animations that he’s done. I guess what I’m trying to say is that he’s not afraid to be crazy with the work he does, and if twin boys can morph into a plethora of references until becoming the king of violence, they’ll do it. Paul tackles a range of subjects in his animations, from Pokemon, to Persona, to fighting games, etc. His work on Scott Pilgrim vs. The World: The Game lent itself well to the source material and the mayhem of Scott’s world.

I wish I could talk more about this guy’s art, but I highly suggest check out his stuff. He’s on livejournal, deviantART, the aforementioned blog, and some of his videos can be found on Youtube. Along with a sample after the break, I’ll link you to those videos on Youtube.

Videos: Kings of Power 4Billion%, QUA – Devil Eyes, The Magic Touch, Go Another Cadbury, Architecture in Helsinki – Do The Whirlwind