Ippo will punch your expectations in the FACE…and then apologize profusely. He’s THAT kind of guy…

Anime is wonderful for a variety of reasons. It’s fun, challenging, surprising, silly, deep, creative, horrifying, mind blowing and very, very varied. Animation here in the US is wonderful and varied as well, this is true, but in Japan, the art form is used to tell stories not just aimed at kids or adults, but of all genres and depths. The anime industry is as wide as the film industry, at the very least, and twice as creative.

So sometimes, when you’re watching the cosmic beast being fought by the young warrior with daddy issues, or the metaphysically challenging ending of a space opera-style show, or seeing a buff dude get punched through a mountain, you forget anime, and by extension, manga’s, talent for simply telling a story. For like all media, any show or story is only as good as the people making it.

And nowhere is this more exemplified than in Hajime no Ippo, George Morikawa’s masterclass in well-rounded, yet accessible and fun storytelling, set to the very terrestrial sport of boxing. A masterclass in great character design, interesting plots and how one uses such a broad, creative artform to tell a constrained, character-based story. END_OF_DOCUMENT_TOKEN_TO_BE_REPLACED

The “American Martial Arts Flick” is certainly a unique creature. It exists as an imitation of its China-born brethren, and is typically held in far lower regard by the general fandom. However, if one were to delve into the world of these misfit animals, they would find a fanbase there just as loyal as the legions of the Hong Kong faithful. And you might even find yourself growing a certain fondness for them as well, if you give it a chance. The way I see it, the American breed can almost be seen as the “store brand cereal” of the Martial Arts world. They lack mascots, uniqueness, and generally cannot recreate the combination of taste and texture that makes “Lucky Charms” and the like so popular. But in tasting it, you understand why there are fans of it, as the cereal has it’s own unique charm.

END_OF_DOCUMENT_TOKEN_TO_BE_REPLACED

Believe it or not, most of these people are male. And one of them is an android! I know, crazy, right?

We are all familiar with the concept of the “Buddy Cop Show”. Typically, a young buck of a detective, usually with potential yet-unfulfilled is partnered with a gruff veteran whose patience and experience serve to keep the young’n in check, and eventually make him better at his job. Over time, the youngster will come to look up to the veteran as a symbol of what he wants to be, and may even adopt him as a father figure. As for the vet, he’s probably weary from all his years of service, but his time with his partner will re-ignite the spark of passion he once had for his job, and both will eventually part as equals.

The reason I start this review with this description is because Heat Guy J is, essentially, a “B.C.S.”, with alot of the tropes associated with said genre. Oh, except the vet is a tall, trenchcoated android and the whole thing takes place in a futuristic city. Despite the cynicism oozing from the above paragraph, Heat Guy J stands as a sterling example of how a combination of good writing, high production values, and well-developed and likeable characters can make even the most stale premise great.

END_OF_DOCUMENT_TOKEN_TO_BE_REPLACED 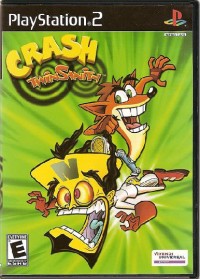 Crash Bandicoot. Merely saying the name will send many a gamers’ mind on a trip back to the 90’s, that golden age of platformers. From Croc to Spyro, the PSOne era was a cavalcade of platform hopping, level running, thing-collecting goodness. But not a one of these were as famous as Crash Bandicoot. Tight controls and an overabundance of personality made Crash stand out from the crowd, and even to this day, many will proclaim Cortex Strikes Back and Warped (the second and third games in the series respectively) to be among the finest games ever made in that venerable genre.

The story was simple enough. Doctor Neo Cortex is trying to take over the world, and thinks he’s found the perfect plan for acquiring help: to genetically modify a bandicoot named Crash. But Crash, as is typical of a heroic marsupial, decides instead to impede Cortex’s plans. With help from his brilliant sister Coco, and his magical tiki mask guardian Aku-Aku (it was the 90’s, don’t ask) Crash stands in the way of Cortex’s plans time and time again.

Luckily (or unluckily) Cortex has help on his end, in the form of a colorful rogues gallery of mutated monstrosities including: Tiny, the not so small mutant tiger, Ripper Roo, a clinically insane blue dog in a straight jacket, and Dingodile, an Australian dingo-crocodile hybrid with a penchant for flamethrowers. Cortex also had a revolving door of right hand men including the brilliant Doctor Nitrus Brio, a meek biochemical engineer with bolts in his head who becomes an off-and-on again ally to Crash, and Doctor N. Gin, a short unstable little scientist with a nuclear missile lodged in his head. Later on, an evil tiki mask (and evil younger brother to Aku Aku) named Uka Uka joins the fray, and brings even more strange underlings into the mix.

It was these memorable personalities that made the Crash games so fun to play. But, time marches on, and like most of the idols of that lost time, Crash faded into obscurity. His license was sold off and original developer Naughty Dog moved on to other things, such as Jak and Daxter and, more recently, the Uncharted series. But unlike the others of that era, Crash still survives, and his games are still coming out with appreciable regularity. As one would suspect, several of the games after the sell off sucked horribly, but something unusual happened in 2004. Travellers Tales, then the ones developing the games (not to mention existing in a time before they became slaves to the “Lego” series of games) released Crash Twinsanity to extremely low expectations.

And what was the response? The game was…actually kinda fun. Actually, it was pretty damn good (well, according to some reviewers). Crash wasn’t back to set the world on fire, but he did have the privilege of starring in one of the more solid and entertaining platformers of the post-Playstation era.

END_OF_DOCUMENT_TOKEN_TO_BE_REPLACED

Well, it's either a Japanese puzzle game, or the weirdest prison rape movie I've ever seen.

It is no secret to anyone who knows me that I am a huge fan of the Ace Attorney games. Sure, the gameplay can get a little boring, and outright irritating at times, but the incredibly well written characters, the intriguing storylines, the catchy, memorable music, and the frequently laugh inducing dialogue, all combine to make an experience that you certainly can’t find anywhere else.

So why have I devoted a paragraph to a game that is most certainly not the one I am reviewing? Because one cannot talk about GT:PD without mentioning that its creator is the same man who created everyones favorite spiky haired lawyer; Capcom wunderkind Shu Takumi. But is his new game another slam dunk of enjoyable creativity, or just a sad shadow of his courtroom opus? END_OF_DOCUMENT_TOKEN_TO_BE_REPLACED