This past week I spent much of my time playing through Persona 4. It’s been a while since I played it and I last left off at the sauna right before the Kanji fight. Well, cut to yesterday, and now I’m up to the the secret base dungeon. In between that, I took a quest where I had to make a mech model for this guy. It was an ema request, so I I figured “eh, why not. The fox’ll give me a discount.” So, I made the main character build the model, and then the slight nostalgia trip hit me… the seemingly tedious job of building a mech model was actually fun when I had one. And it was the only one I ever had.

What Is A Model Kit?

Known as Gunpla (Gundam Plastic Model) in Japan, these model kits came disassembled out of the box. Earlier kits required glue and paint, but the later ones were made so that the most you would need is maybe a hobby knife or small scissors. The kits are broken up into Skill Levels, with the lower ones having less parts and being easier to build, and higher levels have more parts and require more time to build. Model Kits are known for their many points of articulation, right down to the fingers. Model Kits are popular among hobbyists and mech enthusiasts. 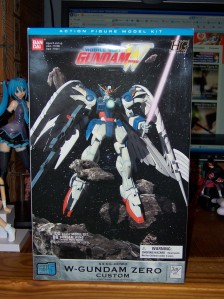 The box it came in (Room not mine!)

I first saw these model kits in a TV commercial. I can’t quite find the particular commercial I saw (the one up there isn’t it), but basically it showed some kids (and a few teens I think) naming the Gundam they had, skill level, and how long it took them to complete. I remember one of them saying he spent two hours a night building one. Watching this commercial, it looked pretty badass, but the idea of actually building one of these sounded boring to me. “They expect me to sit and build one of these? What is this? I want to play with the ‘bots, not build them.” Then, one night when I was at the family Christmas party (my father’s family), I had gotten some gifts. One of them was a this rectangular box. Since I was getting older and the presents dropped in quantity, I thought this was going to be a some cologne set or something. Upon coming home and unwrapping it… it was a custom model kit of W-Gundam Zero.

“Oh crap” I said to myself. I looked around the box, and it’s exactly what I thought it’d be. My family (meaning my mom, sisters, and father) thought there’s was going to be a regular toy in there. I told them, “No, I think I gotta build this…” They laughed, took my word for it, and we continued opening our gifts. Of course, this was on Christmas Eve instead of the actual day. Well, 10:00PM to be exact. December 25, Midnight, Christmas Day. I played around with some of the toys that I had. Then it was time to see what this model kit was about. I open the box, “…oh crap” I again said to myself, looking at the many, many, many pieces I was expected to assemble into one cohesive mech. I was about to have a le grill moment looking at this. Speaking of which, looking at the instructions of building this, the English one had no accompanying text to the pictures while the Japanese instructions that (for some reason) came with it did. 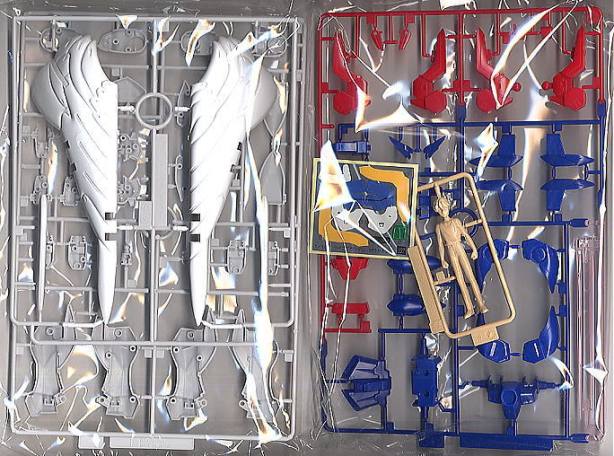 You're supposed to build a mech out of this. These are only SOME of the parts.

So I got to building, starting with the legs as the instructions said. About 2 hours later, I stopped to play the new videogames I got (don’t remember which though). However, there was the model kit, leg and torso still attached, beckoning me to come back and finish building it. About an hour later, I resumed building it. There were some parts that outright frustrated me, but I kept building. Once I got to the wings, one of the last things to build, the sun was rising. Yes, I spent all night building a Skill Level 5 Gundam. The things that I thought was boring was actually fun. And in the end, seeing how it looked completed, I felt like I accomplished something big, and this mech was my trophy. Its wingspan was immense. Add the guns that came with it (that you also had to build), and it pretty much commanded the space it was placed in (in this case, on top of the dresser). But, for all its glory, there was one problem…I lost the neck joint.

I showed my work to everyone in the house, and they were impressed with the look of it, especially the wings. I was careful to move it around since the neck joint was missing and the Gundam’s head would fall off. Taking it back to my room, I played with it for a bit and then placed it on the dresser for viewing. I looked back at the box, now devoid of pieces and a bit saddened that the building was over. But still the feeling of accomplishment was something I wouldn’t forget. However, as I grew older, the space in my bedroom was getting occupied by other things, including textbooks, more videogames, other things in the house — I was running out for space for displaying toys, and this mech used up a lot of it thanks to this things huge-ass wings. I still took it to play with it and just marvel at the work and the crazy amount of articulation. But the lack of space soon led to neglect as the mech would get dirty and its guns lost. Eventually, it was put in a huge toy bag that I placed in my closet. 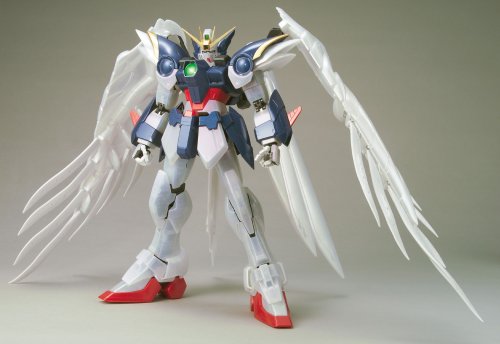 What it looks like when completed. Pretty badass eh?

While many toys came and went in my room, the Gundam would stay the longest. At toy that I got around 1999 would stay in my room until around 2003-2004. While not on display, it was still in my possession. But, after one major cleaning of the bedroom and emptying of the toy bag to give away, I had no choice but to throw out the mech. Its head long gone, parts of its wings either missing or damaged, guns missing, and the body of the mech dirty from age/play/storage/whatever, my desire to keep it dropped.

Today, I have no model kit robots. Never had another one since that one. I’ve been thinking of getting one once I get a job (I get no money doing this). But for now, it’s best kept in the recesses of my memory. I still won’t forget that one Christmas Night/Morning, just sitting there, quitely building this thing in my bedroom, and really feeling good about the end result. And it’s all thanks to an ema request in Persona 4 that reminded me of what it was like to build a mech.