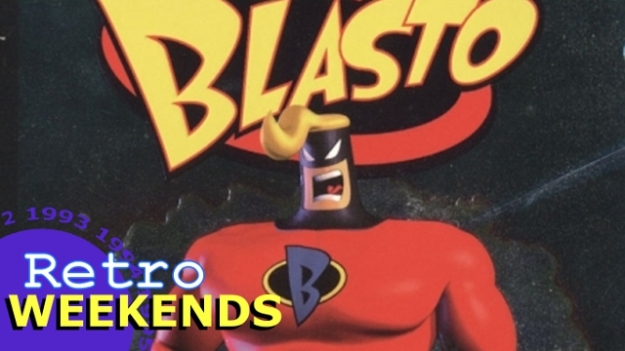 Happy New Year first of all.

Now then, on Christmas Eve morning, we took a look back on the PS1 and my experience getting and owning a PS1. I longed for an N64 for a very long time after playing a lot of it at my cousins’ house. Then come Christmas of 98 I had received a Playstation. You can go to that article to see how I reacted. I briefly mentioned that my first game for it was Blasto. Well, that’s the game we’ll be talking about on this weekend of yet another eve, New Year’s Eve.

Before He Died, He Went To Space

One of the main draws of Blasto was that the titular character was voiced by Phil Hartman (who also voiced Troy McClure and Lionel Hutz in The Simpsons and was a regular on SNL). His voice was a perfect fit for Blasto’s obnoxious and cocky attitude. The game was full of puns and witty one-liners. Some of the dialogue would not hesitate to crack a joke about Uranus, the planet the game took place on. Captain Blasto is called fourth by the Admiral to go and defeat Bosc, an evil alien tyrant bent of conquering the galaxy. Along the way, Blasto must save many Babes that are trapped withing the many alien strongholds. Upon release of Blasto, the game was not really well received, though they did commend Phil Hartman for superb voicework. Unfortunately, several weeks before the game’s release, Phil Hartman was found dead, allegedly killed by Brynn Hartman, his wife. 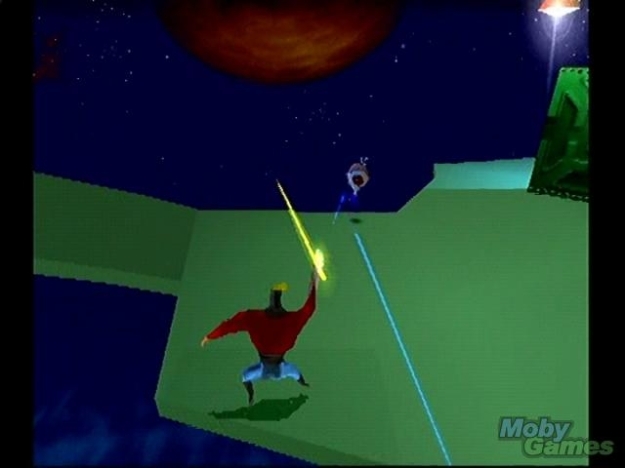 It’s very faint, but I remember first seeing this game on a commercial. Can’t quite find it on Youtube, but I remember the commercial ending off with Captain Blasto saying “Damn I’m gooooood.” I saw the game a couple of times in a Fingerhut catalog, but thought is was pretty goofy looking. Then I got the PS1 in Christmas of 1998, and this was the game my mom got for it. This game… was freaking hard! Not quite having the dexterity with a controller that I have now, I was constantly shot at by aliens. And I didn’t realize that sidestepping was actually useful.

The Snarf. Fuck that thing! When you make it to the desert-like part of Uranus, there’s one area where the Snarf lurks. To get there you have to jump a ledge and climb up. But once you get close enough, he starts rampaging toward your direction. He won’t kill you, but he instantly will once you pull yourself up. There was no way around him since he was uber fast. None your your weapons can kill him…except one. It was a one-shot kill gun (don’t remember the name). It only had one shot in it, and it killed any enemy in that one shot. You could only find this gun in one location. and it was really out of the way. Once you got it, you were expected to go allllll the way back to the Snarf’s lair and kill that thing. Thing is that there was some tricky platforming on the way back, and I think some enemies spawned along the way. You could still kill them as long as you didn’t press the special fire button. There was simply a lot of ways you could mess up when getting back to the Snarf Lair, like being killed, death pits, accidental misfire, etc. When at the lair, you had to be damn sure you shot the Snarf, ’cause missing meant going alllll the way back to get the weapon… And you encounter this guy again later in the game, and you need a different gun for that one. 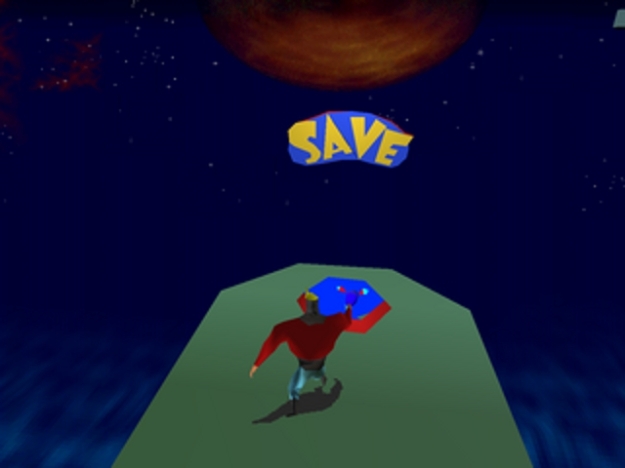 This game used a save feature. The standard when playing videogames. Except one thing… you needed a memory card for it. I had no idea about this as other formats didn’t really require a memory card, like the SNES and the N64. So when I went to save, the game would say to insert a memory card. The cards would go for $20, the same price as a cheap PS1 game. So that meant saving up to get a memory card. That also meant playing the same first three stages over, and over, and over… I would get to the Uranian Dunes, but by then I was tired, and low on life. Once I did get a memory card though (a few games later), I was finally able to save.

Headshots. I was aware of the exploding headshot trope before playing this game. I remember first seeing this in Resident Evil, when Barry shot off the head of the first zombie in the game. So with playing Blasto, you could shoot off alien heads with a charged shot. Some alien blood would squirt out before they dropped to the floor and went away. Picking up a Tetra-Watt power-up, you increased the power of your gun, and charged shots shot off half the body of an alien! Picking up another Tetra-Watt power-up was instant death for most alien grunts, and most of the time they blew up in pieces. Something about this was very satifying. The gore was cartoony, but to a kid like me it was really… sadistic I guess. It was just funny seeing how the aliens died when you vaporized parts of their body (god that sounds terrible).

For reasons that I’ll explain later, I can’t really remember most of the soundtrack. The music of the game was a mix of space opera, sci-fi, and a lot of spacy sounds. The cool thing about the music was that it would changed according to the situation. There was standard, calm, combat, and silence. Standard was your regular music, combat was when aliens were around, calm was when there was a period of non-combat, and silence (meaning no music) was for prolonged periods of non-combat.

This set the stage of Blasto. It was going to be a goofy space adventure full of aliens, exploding heads, and saving babes. The music went well with the sort-of old-school comic representation of what people thought the future in space would look like, even though it had a funky beat in it. Since I initially didn’t have a memory card, I heard this theme… a lot.

Here’s another theme I heard a lot dure to having no memory card. It starts off all dramatic, like the game is finally getting serious, then the game is like, “Nope, you’re still playing Blasto.” It’s a pretty neat mix of drama and space-techno.

Oh lord. By now when you see this section pop up, that should tell you something went wrong. Well, around the turn of the millennium I was cleaning my room. I picked up the habit of putting all of my CDs (thus my PS1 games) in CD booklets. I was cleaning my room one day and forgot that a few of the discs were out on the bed. I decided to take a breather and sit on the bed for a sec. Besides my asscrack, I felt another crack… the cracking of the Blasto disc. Yep, my fat ass cracked the game in half! *sigh* This was probably around 2001 that this happened. My first PS1 game became the first and only disc game that no longer works due to cracking. It sucks too. Being a better gamer than I was then, I might be able to enjoy this game. I’m also hearing that this game is really rare now. But alas, I can’t play it anymore. 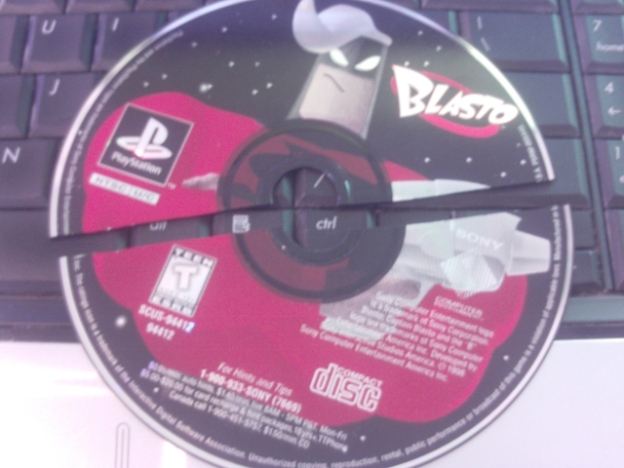 You can thank my ass for this.

Even though it was a T-rated game, it still seemed to be geared toward a younger demographic. However the game proved to be too hard for younger gamers with its vast levels to explore, numerous alien waves, and the length of the game. I did manage to beat the game after playing others on the PS1. You could unlock a Babe Viewer mode if you saved all of them (which I did). I think there was also a sound test menu so you could hear Phil Hartman’s witty lines. There was going to be a sequel. But since Hartman died, those plans were scrapped. Hartman’s gonna be a tough act to follow of Sony decides to bring back the idea of another Blasto game.