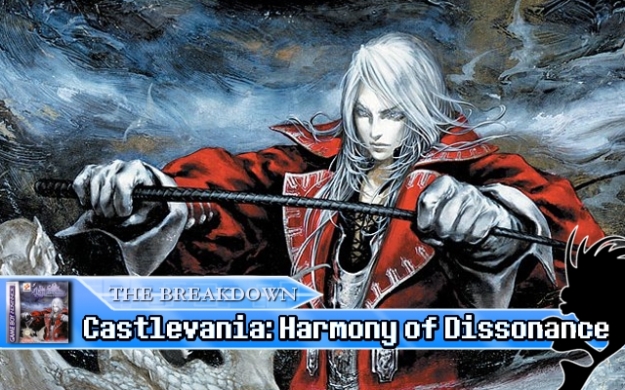 While the world enjoys the new Harmony that descended on the downloadable game scene, I took the time to go out and buy an old Harmony on the GBA. Released after Circle of the Moon, Harmony of Dissonance released during a sort of renaissance period for the series as Castlevania was once again a force to be reckoned with in the gaming scene after the release of SoTN. However, this entry was seen as a bit lackluster, and to this day is seen as the black sheep of the post-SoTN games. Were the initial critiques spot on? Has the game aged better as time went on. Or should it have been a forgotten note? After the break, I breakdown Castlevania: Harmony of Dissonance. 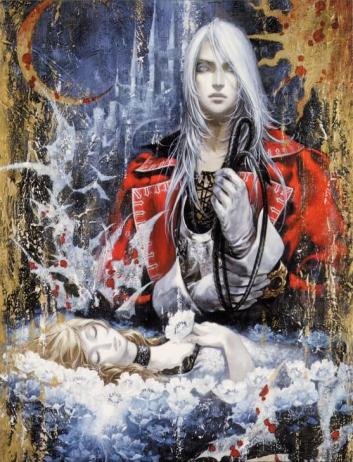 The story sees our hero, Juste Belmont, trying to find out where his girlfriend Lydie is. His search brings him to Dracula’s castle… but it’s not Juste’s time yet. As the usual Castlevania lore goes, Dracula’s castle appears every 100 years, with a Belmont (or someone else) there to take him down. For Juste, it’s too early as Simon Belmont just defeated him over 50 years ago. So something’s amiss. Maxime, Juste close friend, gets hit with amnesia and can’t quite recall some of the events they resulted in Lydie getting kidnapped. We find out later on that someone is assembling the parts of Dracula to resurrect him, and that person is… Maxime? At first this looks like a betrayal story, but then Maxime in another scene acts like nothing happened. The reality of it all turns of to be one of the coolest twists in the series (we’ll come back to this later). The story, like many entries in the series, is not deep and only serves as a backdrop to get someone in the castle. Not much new is added to the formula two games into the Metroidvania saga unfortunately. It wouldn’t be until the GBA’s third CV game that we really see sparks fly. But here, it’s just another romp in the castle. Score: 75/100

The graphics here are unusually bright for a Castlevania game. However there is a reason for this. At the time of its release, people were still stuck with the old GBAs and you needed a damn studio light to see anything on the freaking thing. The previous CV game, Circle of the Moon, suffered with the dark GBA screen as most of the graphics were dark and it was hard to see anything. So the graphics had to be brighter in order to see anything in the game. Come the GBA SP and the DS and this issue was resolved with a backlight. So it was more of an issue of circumstance that explains the bright graphics. The graphics themselves are pretty impressive for the GBA, especially for the larger enemies and some of the backgrounds. I do wish some of the boss deaths were more varied though as most seem to die the same way. HUD and menus exhibit the same Gothic flare that was heightened after SoTN. Ayami Kojima’s work translates well into pixel-portrait form and is amazing as ever. Score: 85/100

Before getting Harmony of Dissonance, I listened to some of the soundtrack of the game on Youtube. Immediately I noticed that the music sounds more 4-bit GB than 16-bit GBA. There’s a reason for this though. Some stories point to either the new HoD team not knowing how capable the GBA soundchip was, or that they didn’t have the tools yet. Koji Igarashi would come out later to state that the music quality was sacrificed for the graphics, but I find that hard to believe if the first and third GBA are mean anything to go by. Also, there are 3 high-quality songs in the game (the title, prologue, and credits). Regardless, I found the 8-bit sounds cool and gave the game a more creepy vibe to it. So I gave it the benefit of the doubt. Hachi76 warned me that there are better OSTs in the CV series than this. And now I’m here to say… he was right. While there are some good songs in the mix, like Successor of Fate up there, others are meh, and others that are just a mess. I was hoping that maybe with the reduced sound quality, the team would have to revert to the old way of making music and depend on catchy melodies. Unfortunately, they try too much to give the game some kind of atmosphere that the quality just can’t deliver on. As it stands, HoD’s OST is one of the weakest in the entire series. Score: 70

Where do I start here. Well the controls are okay for the most part. The whip mechanic might throw some players off as whipping in mid-air while jumping forward will commit you to the jump arc until the very last minute. So if you’re one of those that like jumping and attacking (and sometimes changing directions), it’s not going to work so well here. It’ll take some time getting used to R for right dash and L for left dash (for anyone accustomed to pressing one button and dashing backwards). Juste does run a bit slow, and with no other forms of physically going faster other than dashing or (like I did) sliding, this can be nuisance. While traversing the castle, you’ll come across several teleporter rooms. But unlike other games, the rooms are only linked to two rooms at a time. But then you come across a larger teleporter room that reveals a pretty cool twist. When you used the smaller teleporters, not only were you going to another room, you were also going into another dimension. But this cool twist is also this game’s undoing. A few details are changed between the two castles while the rest it is untouched.

And then… the small teleport rooms become a problem. Now that you know what’s going on and what they do, it becomes annoying. You can’t teleport to a different room without changing dimensions first. If you want to go to a different room without dimension hopping, you can’t! You have to either use the teleport room anyway and find a the bigger teleporter to dimension hop back to the castle you were originally in, or haul ass there yourself. But oh, now you can’t because the path is blocked or unreachable. Gotta go find an item I probably missed. This wouldn’t be a problem if Juste had a way to move faster other than dashing/sliding since the items you need are so far apart from where you use them. Eventually dashing/sliding starts to feel slow too. And because you’ll have two castles to traverse, it becomes too easy to miss things you may have forgotten. There are many blocked paths in the castle, too much in fact. It becomes maddening when you carefully plan out your route and think you got an idea, only to be greeted by the locked door that you forgot was locked. And there’s one gold door that I would’ve never known about that I had to go through. To put simply, the team must’ve gotten carried away when they made up the map and exploring it. There are good ways of backtracking, and then there’s this game that makes it annoying.

Boss battles are piss easy too. I only encountered the Game Over screen once, and it was with the battle with Maxime. There were some cool throwback bosses, like the Bat Company and Legion (or Granfalloon for you SoTN fans). And there were a few that nearly killed me. But a large portion of the bosses provided little to no challenge for me. Even the final form of the final boss was KO’ed in 45 seconds. Score: 65/100

You’ll only come back to see the other endings. There’s three. The first one is pretty easy. The other two are the endgame ones. Thankfully they’re close to each other so you just have to go back and fight differently. But after all the architectural crap this castle puts you through, you most likely won’t be coming back. Also, it’s soooo not worth it to get all the furniture for that room. Moderately Low.

It was nice to see this game on the shelf at Game Champ and to finally play this long forgotten entry in the series. But once I got fully immersed in the game, it started to become a chore to play. It’s a shame too. Pixel work was great, and how the two-castle twist was handled was pretty cool. But the level design and modes of transportation just did help getting through the castle. The music could’ve benefited from the low quality by making great melodies, but it tried doing things that it just wasn’t capable of. If you wish to play this black sheep entry just to see what you were missing or want to finally have all the handheld CV games played, then it doesn’t hurt to try. But Once you finish it, you’ll see why not many gamers talk about it.