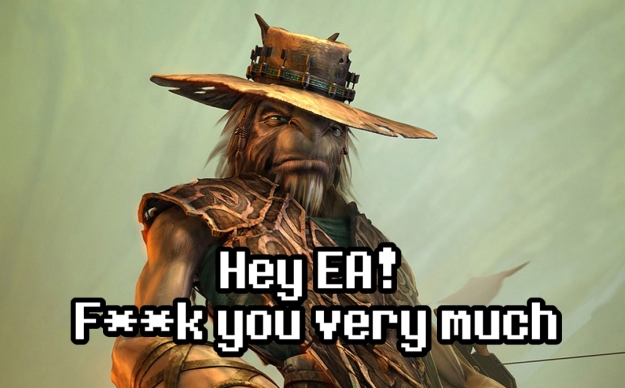 In an interview with GamesIndustry International, Oddworld Inhabitants founder Lorne Lanning dished some dirt about his company’s fall after the release of Stranger’s Wrath, and the poor marketing and business choices made by the game’s publisher, EA. In the interview, he mentions how the money made on games EA publishes don’t go back to making more games and funding developers. “Our agreement is, you won’t be seeing our profit being spent on Ferraris and shit like that… Our profits are going back into games so we can ultimately raise to the point where we can grow our audience…” He went on to state, “The owners [EA] are flying jets, do you think they care about the customers just one fucking per cent? Not at all.”

He also explained what the hell happened when Stranger’s Wrath was released. The game was supposed to be released on the original Xbox and PS2 back in 2005. Oddworld Inhabitants would handle Xbox development while EA did the PS2 version. That version was later scrapped, with EA changing their marketing strategy, opting to not do much advertising for the game since it was an Xbox exclusive. Lanning stated that his game “needed to do 1.6 million to break even.” But is game only sold 600,000. He didn’t specify if the need to sell that much was a goal set by his company or EA.

After the failure, EA presented an opportunity for Oddworld Inhabitants to be acquired them. Lanning told EA, “Fuck you very much. That’s not a sustainable model, that’s a hostile acquisition.” He compared the situation to being in bed with a very horrible partner. Lanning praises the new venture of digital distribution, one that he says benefits the developers more than the old model of videogame business. He cites being able games at a cheaper price, thus selling more copies with all money made on games going back to the developers, which can then be funneled to make more games (instead of the aforementioned private jets).

Oddworld Inhabitants is back in action though and are revving up an HD remake of Abe’s Odyssey, and Lanning is happy to be back in the business without EA. Oddworld: Strangers Wrath is currently available on Steam, with a Vita version coming in November.