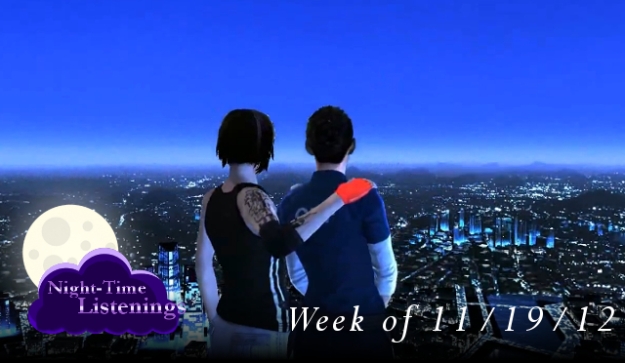 This week was Thanksgiving, so all this week was about giving thanks to the things videogames did for us. We started the thank-you’s with The Legend of Zelda: A Link to the Past. Then we surfed from sewers in TMNT IV: Turtles in Time. Then we climbed The Shard in Mirror’s Edge. Then we searched for the crystals in Final Fantasy IV. And finally we paid a visit to the Mushroom Kingdom in Super Mario RPG.

The Legend of Zelda – Dark World
Composed by Koji Kondo

So lets start off with The Legend of Zelda: A Link To The Past. I’d like to give thanks to this game for giving me a sense of adventure as a kid. I never played RPGs before this, and the original Zelda was confusing as all hell. But this, this was a complete world. The journey to find the pendants led us to meet interesting characters, fight interesting foes, and vanquish memorable bosses. However, upon entry into the Dark World, that’s when all we knew changed, and it was time to seal this world once and for all! So, what do you personally thank this game for?

“Sewer Sufin’!” The voice that introduced these stages still tickle the nostalgia from time to time. I’d like to give thanks to Konami for making Turtles in Time and creating one fun as hell game. My cousins owned this game, and man did we have a blast playing this bitch up! From throwing foot soldiers at the screen to getting the power-up to spin rapid to fighting over who played as Leonardo or Donatello, fun times were had with this game. Sewer Surfin’ was one of many high points in this game. We’d jumpkick anyone who appeared on-screen, and we absolutely trounced the boss of this stage. So, what do you thank Turtles in Time for?

Ah Mirror’s Edge, the game that formally introduced me into the currently generation when I got myself a PS3 (the 360 in the house is not mine and is never in my bedroom). I saw coverage of them game at E3 2008 (god I feel old) and the clean, minimalist artstyle stuck out to me over the drab browns and greys at the time. While yeah I’m pretty much trading earthly colors for predominantly bright whites, something about the architecture in this game felt, for lack of a better term, real. And the gameplay was the antithesis of what most FPS games were. You were encouraged to avoid conflict and just run. And the story-behind-the-story of this city probably intrigued me the most. And the music, god just listen to is. So damn relaxing. So I give thanks to the team at DICE for taking a break from Battlefield to try out a neat experiment like this. Here’s hoping for a sequel! So, what do you thank Mirror’s Edge for?

I hated this game as a kid. I mean really hated it. As a result, I really hated Final Fantasy in general. From the way battles were done to the Antlion constantly kicking my ass, FFIV left a sour taste in my mouth for the series. But how did I get back into this series? Well, you’ll have to wait ‘til tomorrow for the answer. For now, just know that I returned eventually to play this game on the PS1 to, I guess, redeem myself. I kicked that Antlion’s ass and proceeded onward. What I discovered was a story that was rather interesting and had me curious all throughout. I would also get my ass kicked constantly by the many bosses of this game. While I may not have understood the brevity of some of the themes in the story when I was younger, I did eventually understand when I got older (FFIV DS also helped too). So for that, I’d like to give thanks to Final Fantasy IV as it taught me to brave the challenges of RPGs and to go persvere through the bad (when I hated it) and the good (when I loved it). So, what you most thankful for with Final Fantasy IV?

Yesterday I mentioned that I hated Final Fantasy but then got back into it because of a game. Well this was that game, Super Mario RPG. For a very long time, Super Mario RPG has never left my #1 spot as my favorite game of all time. Many games have come and gone, but not have had the same impact on me as Super Mario RPG. The characters were memorable, the battles were engaging, and the music is just fantastic (thanks to Yoko Shimomura). As a kid in the 90s, I came into playing this game not knowing what an RPG was, nor realizing that what I played before this, FFIV, was an RPG. So to round out the week, I give thanks to Super Mario RPG for showing me the ropes of what it is to play an RPG, and giving me some awesome memories along the way. Without this game, I wouldn’t be as big an RPG player as I am today. So, what are you most thankful for with Super Mario RPG?