I’ve been somewhat ignoring this game for a while now. Don’t know why. Probably because I didn’t quite get a good grasp on how this game was going to be played when the first trailers were shown. There’s also the fact that a lot of the KID stuff is in Japanese without English subtitles, so I did quite get a grasp of the story either. However my recent need to gravitate to the free spirits of the game industry has brought me here, and now I’m hyped as hell for the game!

Seeming to take cues from Suda51’s earlier games like No More Heroes and Killer 7, The story follows Mondo Zappa, an Assassin who recently got accepted into the “Executioner Office,” a sort of secret agency of assassins. A client comes in, asks for someone’s head, and one of the assassins take the job. Simple enough. 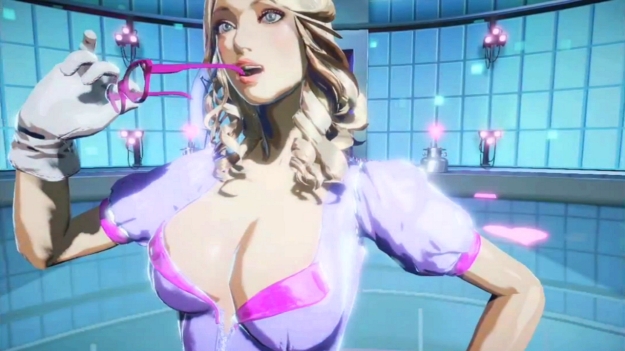 The focus of the trailer here is on the girls. Something tells me that Suda’s tapping into his inner James Bond/Golgo13 with the “Mondo Girls” title being a somewhat neat reference to the “Bond Girls” as Mondo is kind of a Ladies’ Man. A sharp dressed man with a bitchin’ robot arm, who could blame him? He’s also a sensible man, only asking for the kiss of a woman instead of her money, thus letting her save that money for something pretty. The role of each girl shown in the trailer is unknown, though we can sorta guess which one’s are the clients and which are the targets… I think. Nurse lady Scarlett is throwin’ me off since she looks like a target to kill, but chills above the carnage. Or maybe she’s part of a holodeck style tutorial level at the start of the game.

And is Mondo one the moon with just a space helmet on? Why yes, yes that is Mondo on the moon with just a space helmet on. This is also hinted at on the game’s official website as Moon Travel is a norm in this futuristic world. We also get a glimpse of the game’s Gigolo Glasses, a sort of x-ray visor to peek into the underoos of the game’s women. If this is like recording stuff into a logbook a la Metroid Prime‘ Scan Visor, then sign me up!

Killer is Dead will be published stateside by XSEED and will be released some time this Summer. Europe and Australia will get the game too, courtesy of Dead Island and Saints’ Row IV publisher Deep Silver.