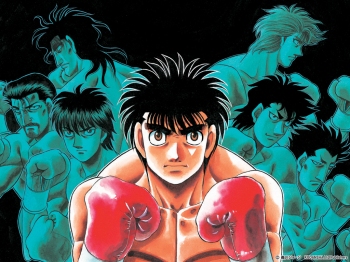 What do you do, when everyone is blue…and punching each other.

So, there’s this show. Hajime no Ippo. And it’s about struggle and friendship and humor and self worth. And you know what else it’s about?

Boxing. That sport that involves people punching eachother a lot. So naturally, you’d expect there to be some hardcore matches in the series. This is a list of the top fights in a series filled with great fights. Fists will fly, tears and blood will be shed, and you will shout many “OOOOOOH!”s as you watch. As I list the fights, I’ll also go into some small detail of the arc of episodes that leads up to the fight, since in some of these cases, the lead in adds an extra level of depth to the matches themselves.

Note, this is from the series as a whole, so that includes the first and second TV anime, the TV movie and the OVA. Oh, and of course, SPOILERS WILL ABOUND IN THIS LIST.

That being said, let’s get started! READY! BOX!

This match was not enough of a match to really warrant giving it its own spot, but I simply have to include it, because in a show full of push and pull, of worthy fights and worthy opponents, this bloodbath sticks out as a viscerally satisfying example of come-uppance.

Shigeta is a challenger for Sendo’s lightweight belt. Generally an arrogant prick, he nonetheless is talented, and using his unconventional style (he’s a “southpaw”, meaning he fights mainly with his left hand. This is unusual, and most boxers have trouble compensating against it) actually manages to do quite well against the champ.

And then he does this.

Homoerotic closeness aside, Shigeta basically engages in the equivelant of taunting a rhino, and it goes as well as you’d expect. You’ll have to watch yourself to see, but what ensues is basically a slaughter of epic proportions, as due to a combination of Sendo’s brutality and a stubborn second, Shigeta literally has the fight beaten out of him. Permanently. A satisfying end to an unappealing character.