As I mentioned in my review of the first anime, the greatest strength of the series is that all of its characters, major and supporting, get appreciable development and screentime. And it is this dedication to evenness that is made manifest in the OVA special, Kimura vs. Mashiba.

It gives not just a moment in the spotlight, but an entire story in it, to one of the series’ more likable characters, one who until now has been relatively under the radar. Throughout the show, Kimura has been on the sidelines, less visible than Aoki if only because Aoki is more of a noticeable presence, if you catch my drift. 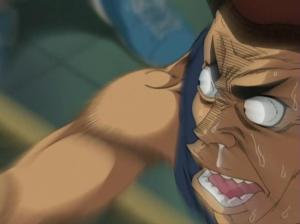 Also, he has a fear of floor tiling.

But this show is all about Kimura. We see him struggle with his perception of himself as a boxer, and more importantly, as an aging boxer. He still has a number of good years in him, true, but what if this doesn’t pan out? What will he do with his life if he’s not good enough to be in the big leagues? It’s this question that drives Kimura to train his body up for his Junior Lightweight match against a man who inspires pants-shitting terror in almost everyone who fights him, and who Kimura himself would usually fear.

I’ll get into him later, but for the purposes of this, all you need to know is that Mashiba is a beast of a man, all lanky limbs and dark, frightening demeanor. But Kimura’s determined to do it, and it’s hear that we get an interesting look into what it means to be, well, NOT the uber-gifted main character. We find out that Kimura is a jack-of-all-trades; he’s fast, moderately strong, technically proficient. But he’s also a master of none of those trades, and worse, he lacks a Sunday Punch to help him finish decisive bouts. (a “Sunday Punch” is how boxers refer to their “finishing blow”, their most powerful strike. To use a very anime term, their ultimate technique.)

We see him struggle with this, overcome it, and then it’s time for the match. My appologies for taking so long to get here, but it’s important that you know the buildup; due to his lower-key reputation, NO ONE really expects Kimura to be much of a challenge to Mashiba, including Mashiba himself. And for the first half of the fight, that seems accurate. Mashiba’s precise, brutal assault seems to be demolishing Kimura little by little, as he bides his time, waiting…waiting….waiting.

And then it happens. The tide turns with what is not just the single greatest punch in the entirety of Hajime no Ippo, but might also be one of the greatest punches in anime history.

After feeding his fish (yes, his fish), Kimura noticed its jumping ability, how it would swoop up, and then into a downward arc to get its food. And thus, the Dragonfish Blow is born. A body blow to divert someone’s attention completely downward while, using the momentum from said blow, the boxer then brings his other fist soaring in from the temporary blind spot that is eye-level. It is a devastating technique, and it is a delicious irony that KIMURA is the one who made it.

Go to 9:20 in that video. Seriously, do it now. The intensity of the buildup, the stress and sweat and blood that Kimura has put into preparing his new, best move. The desperation of that last balance-destroying punch, and then, the payoff as Kimura NAILS Mashiba in the face and ragdolls him across the ring. The silence is deafening, the looks on everyone’s, ESPECIALLY the trainer’s, faces are priceless, and just like that, the match enters an intense, even state. 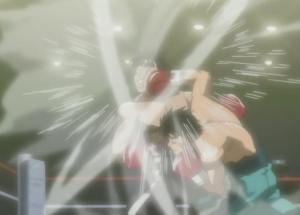 The match as a whole is great; brutal, fast and furious as all hell. And to cap it off, even though Kimura lost in the end, he is, to this very day (said chapter in the manga happened over a decade of real time ago) the only person to make “Grim Reaper” Mashiba feel true, genuine fear. And that’s pretty fucking awesome.

But goddamn, that punch…