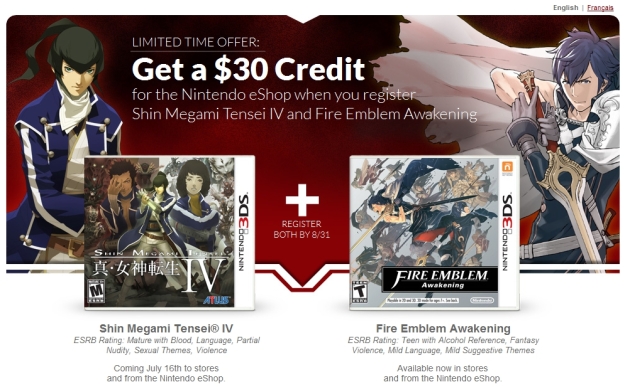 Nintendo has launched a promotion on its Club Nintendo program that if you register both Fire Emblem Awakening and Shin Megami Tensei IV, you’ll get an extra $30 added to your eShop account. The promotion will last from the release of SMT IV (which is next Tuesday) all the way to August 31st. According to the press release, both games must be registered to the same Club Nintendo account . [UPDATE] Both games have to be registered by August 31st to qualify for the promotion. Also, it’s confirmed via Tiny Cartridge that if you registered your game beforehand, like around the FE: Awakening launch, it counts. It also says it at the bottom of the promo page. More details about how to redeem your $30 credit can be viewed on the Club Nintendo website.

While some might think this to be some random pairing of games for a promotion, this actually ties back to the fact that Shin Megami Tensei X Fire Emblem actually still exists and that it’s in development. Sad we didn’t hear anything about the game at E3. But if this promotion is anything, that means this project is still alive and well.