So far news pertaining to Persona 5 has been pretty scant. The first trailer used chairs with ball & chains attached to them, with only the tagline “You are a slave. Want emancipation?” to go along with them. The second trailer showed a lot more, this time showing the main protagonist in a train heading towards the main city. Still, there wasn’t much we could go on except that whatever enemy was there showed up in the real world. So now we come to this, the first trailer to show gameplay as well as a lot more info than what the previous trailers were willing to let out. The quick cuts might be too much to take in or outright miss. So let’s break this down bit by bit.

If you want, watch the video above again to maybe refresh you memory. Now then. Let’s get started. Each image can be clicked on for a bigger view. 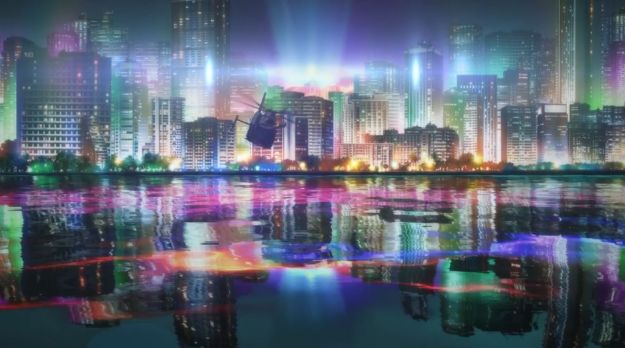 First we have this establishing shot. Right away we can tell that the setting is a lot bigger as well as fancier than the Persona settings we’ve come to expect.

For the looks of this shot, this takes place in some kind of gambling den, like a casino or a pachinko parlor. Just like the city, this too is very glitzy. But more on that later.

And right away we see our main hero of the game… wearing a mask. Long time Persona fans will understand the importance of masks in this series as they played quite a big role in Persona 1, and especially in Persona 2. Usually in Persona, it’s explained that people put on different masks (figuratively anyway) for different occasions. The Personas are also seen as a kind of mask. Though it’s interesting that the main character will be actively wearing one through the game instead of being on either a villain, in a flashback, or on Philemon. 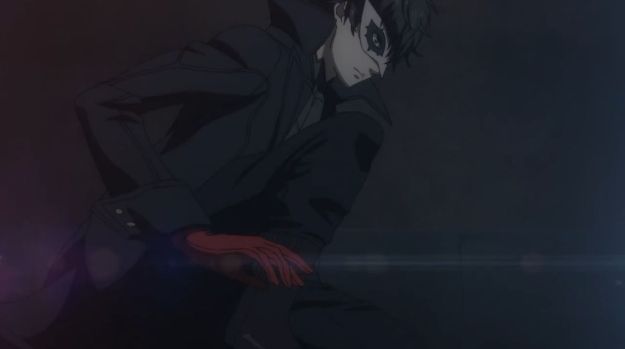 Let’s take a look at his clothes now. Far from the school clothes we’re used to seeing him wearing. Usually in the Persona series, unless it’s a special armor, the characters are just in their uniforms/street clothes when traveling around or going into a dungeon. If they’re putting on something for the occasion, it’s very minor, like the armband the S.E.E.S. members wear in Persona 3. Here the main character has an entirely different getup, like he’s some kind of spy or super hero. 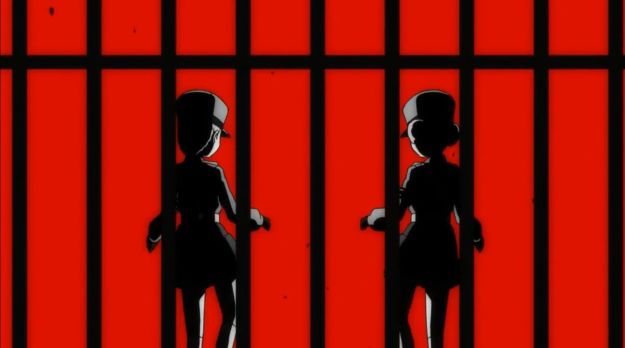 The cage here calls back to something that the developers said they were going for, that humanity is sort of stuck in their own cage of life, unable to escape and be free.

And in this prison cell will be your assistants, judging by the blue attire. And…

… It turns out this prison is the Velvet Room, with Igor as the warden. In Persona 1 and 2, the Velvet Rooms were more or less rooms that were simply there to help with fusions. Philemon was the real symbolic player here. Come Persona 3, and the Velvet room would take on a more symbolic role. In P3, it was an elevator that made its long climb to life’s answer. In P4, it was a limo that aimlessly drove around in search of the truth. Here, it’s now a prison, again mostly likely alluding to humanity being stuck in the cage that life has put them in with very little freedom to move around.

And finally we have our first glimpse of gameplay. Right off the bat we can see that thanks to the incread tech at P-Studio’s disposal, they can pack in a lot more NPCs than before, lending to that big city feel that this entry seems to be going for. We can also see that the game will progress through days, much like P3 and P4. 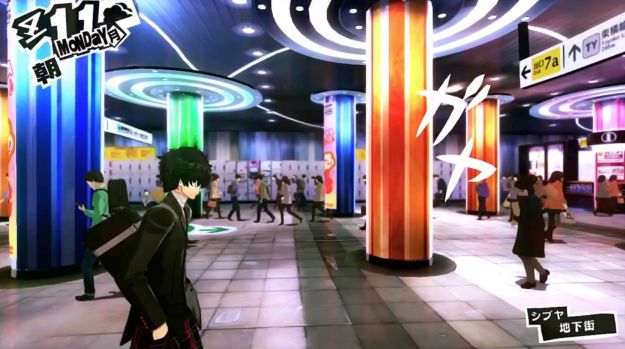 Here’s another location, probably an underground mall. The sign on the lower-right corner says Shibuya. Could this game be taking place in real world cities as opposed to the fictional ones like Sumaru City or Iwatodai? Or is that just the name of the mall? 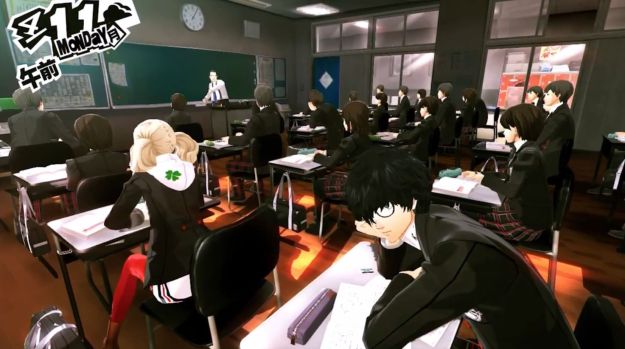 This scene here may suggest that like P3 and P4, you’ll have take care or school duties everyday. Looks like the teachers will be a bit more active at getting you character’s attention, like this teacher here throwing a piece of chalk at you to wake you up. 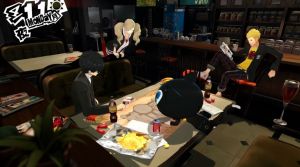 This not-really-the-Stray-Sheep-but-would’ve-been-cool looking area seems to be the place where the main characters and their weird cat come together to plan. The main character has a map on the table, suggesting that they either got this map from someone or know of the place and just want to plan out more accurately. This also means that any operations they will be doing will happen at night. Also notice that all of these scenes happen on the same day, unless the HUD up there is just a placeholder.

Now here’s something interesting. All these Latin words (except for cavum) are actually the Seven Deadly Sins. The ones pictured are Gula (Gluttony), Acedia (Sloth), Luxuria (Lust), Superbia (Pride), Ira (Wrath), Avaritia (Greed), and Invidia (Envy). In the scene to the right and bottom each sin is followed by a “Persona”. Could it be that the Personas align with a deadly sin now? 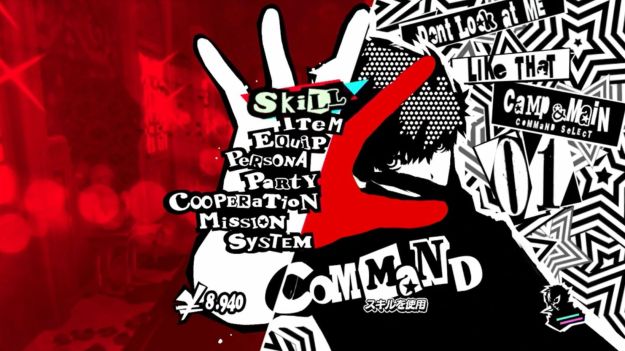 Now we get a look at the menu interface this game will use. There’s one menu item there that’s new, and that Cooperation. Is this some kind of co-op mode, or is it similar to the feature that Persona 4 Golden had where you can call for help?

Here’s another interesting feature: Guns are making a return as a separate weapon equip. Last time it was possible for a character to equip both a melee weapon and a gun was in the very first Persona game, which was a holdover from the mainline Shin Megami Tensei games, as well as some of the other sub-series games. P2 and P4 only had designated characters use guns, while P3 (though they were fake) had them for summoning Personas.

Now we have a shot of the first dungeon, which kinda looks a bit like that glitzy location in the beginning of the trailer. The area also seems to be a lot more open than in Persona 3 and 4, and a little more organic as well.

This scene above some chandeliers also seems to indicate that these dungeons will be more wide open. Or maybe this is just a situational dungeon for a specific event.

The main character can now zip around hiding sport to keep from being detected by an enemy and set up a surprise attack. It’s strange though because he does it in an almost superhuman manner. Maybe this place has that effect on those that have the gift of summoning Personas, or maybe it’s the Personas or something else giving him that ability. 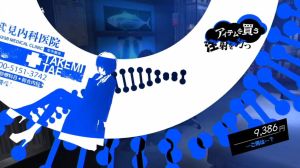 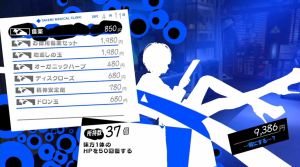 Here’s a look at the clinic, most likely where our characters will be getting their healing items.

And just like our main character, his friends are also dressed like superheroes/spies. They too also where masks. 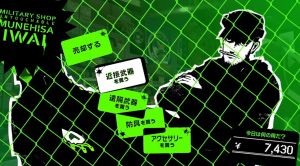 And now here’s the weapon shop. The “Joker: The Fool” title over the main character indicates that once again every character will align with an tarot arcana. What kind of interaction will the arcana and seven deadly sins play?

Now here’s an in-game scene of the Velvet Room prison that we saw earlier. While he may look like Vincent from Catherine, that’s actually the main character behind bars. Judging by his struggling, this is his first time here. 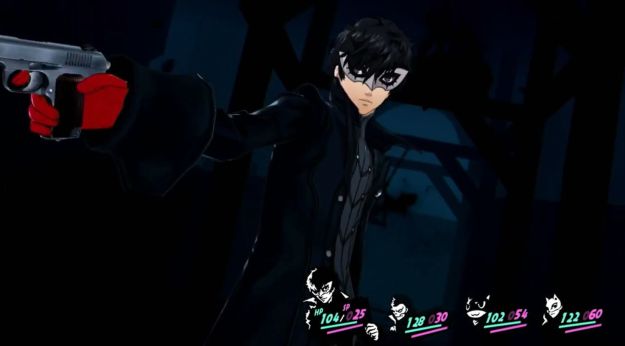 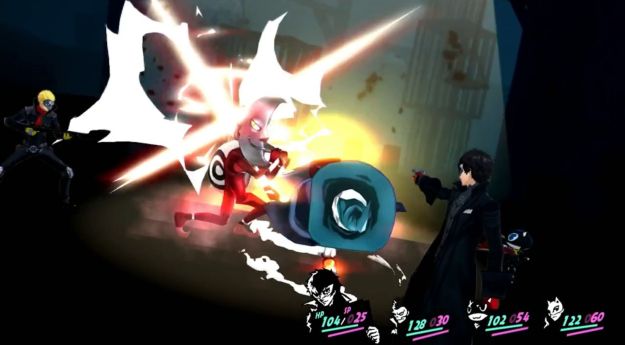 And here’s what may be the most interesting image in this trailer. We can clearly see that the characters are fighting the MegaTen series demons Sandman and Pyro Jack, and not the common Shadows we’re used to seeing in P3 and P4. The demons were the regular enemies in P1 and P2. In P1, successful negotiation with a demon had it join you as a Persona. In P2, the demons gave you tarot cards that you could then use to summon a Persona (which were those same demons). In P3 and P4, the demons were already Personas and were acquired mostly through Shuffle Time. It’s interesting to see these demons be common enemies once again. Maybe they can be recruited through negotiation like in P1 and other MegaTen games and side-games? 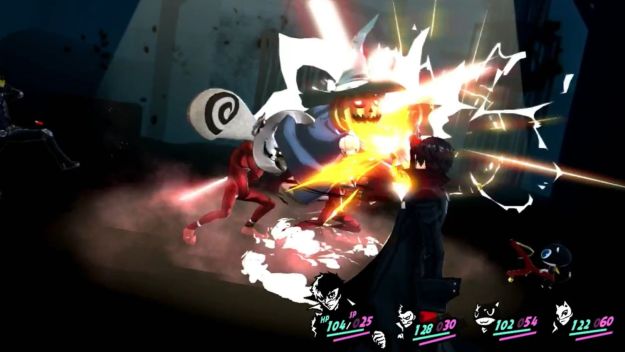 Here’s another shot with Pyro Jack in a more visible angle getting his ass kicked. 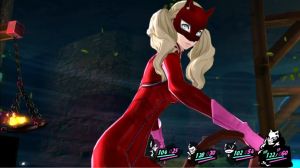 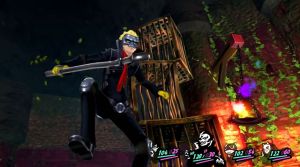 Here’s a clearer view of the main character’s friends in their superhero-like outfits. 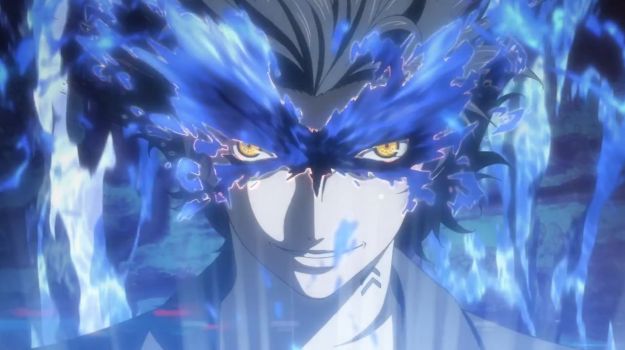 Finally, here’s the main character again. Judging by the glowing yellow eyes, this is actually his Shadow. From the looks of it, the Shadows may be going back to playing mix of  the kind of role we’ve seen in P2 and P4. In P2, (spoiler) the Shadows of each character came out near the end and haunted the main characters while navigating the Xibalba temples. In P4, the Shadows of each character were the main bosses of each dungeon. With such prominence here, they might be playing a P2-like role much sooner and be a constant threat. Or maybe they… nah, I’m going on a little too long now.

So then what do you think? Something I missed? Got wrong? Something to add on? Sound off in the comments below!