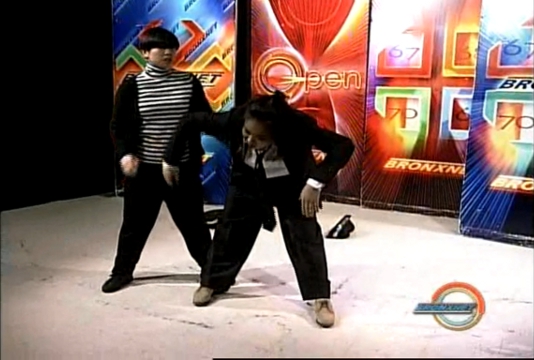 Several weeks ago during my internship, dancers Mitsuko Yoshitomi and Honomi performed on the Open show set. You can catch their performance on the BronxNet Open site (it starts around 50:32, followed by an interview with them around 55 minutes in). The video does load slowly though. But fret not, you can hit the jump and see that same performance in the youtube video below (you’ll only be missing the interview). They will be performing this Saturday (May 21) at the Dance Parade in NYC, which starts at 1PM.

These two lovely ladies performed to the beat of the late great Michael Jackson. As the Floor Manager that day, I had to keep myself from loudly going “ohhh!” once Smooth Criminal came on. Honomi (the one in the stripes) has been dancing since the age of 3, thanks to her mother who teaches ballet in Japan. Mitsuko (the one with the arms out) has been dancing since the age of 10, learning different hip-hop techniques in Japan and expanding upon them after moving to the U.S.

Remember, you can see them perform at this Saturday’s Dance parade in Manhattan. The parade route begins at 21st and 22nd street between Park Ave. and Fifth Ave. and ends at Tompkins Square Park. Leading the parade is the Yasakoi Dance Troupe, so you got more reasons to go. Don’t live in New York? Well, haul ass over here and see it!