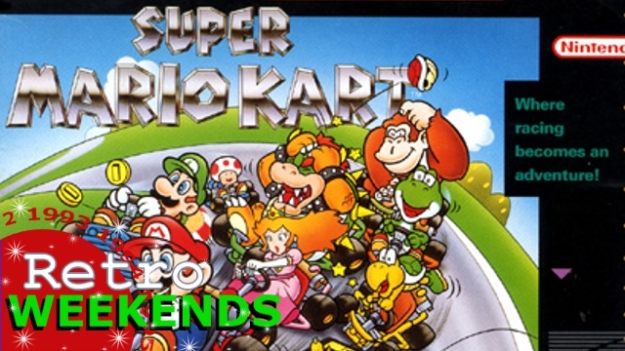 Next weekend is the weekend of Christmas. That tree of yours is packed with presents, and there’s probably a 3DS in one of those. Good luck to you with that. But today, we’re going back in time again (as we always do with Retro Weekends) to the year 1996. If you read last week’s Retro Weekend on Donkey Kong Country 3, you’ll know that I also received Super Mario Kart alongside it as a Christmas gift as well. Well, this week is Part 2 of our little Holiday Special of Retro Weekends. Hit the jump and join me as we talk about Super Mario Kart.

One of the unique features of the SNES was Mode 7. Mode 7 was a feature that enabled 2D graphics to be rotated and scaled, making the game look like it was in 3D. At the launch of the SNES, several games utilized this to show off what it could do. One was Super Castlevania IV with the rotating room. Another was Pilotwings, which acted as a sort of tech demo for Mode 7 graphics (but trust me and Suikoinfinity, it’s an amazing game). Then there’s F-ZERO, a game that paved the way for how racing games could be done on the SNES. In Making Super Mario Kart, Miyamoto and company wondered what it would be like to have simultaneous split-screen multiplayer in a racing game. Using what they learned with F-ZERO, they got to work. The game initially didn’t have Mario characters, but a little “what-if” scenario at the devroom played out, and they stuck with having Mario characters. Super Mario Kart was released in 1992 and gave birth to the Kart Racing genre.

Guess what guys!? I never saw the commercial as a kid. As a matter of fact, I never knew the game existed! Since the game came out in 1992, my memory was still very hazy and any memory of 1992 came from pre-school. So, come Christmas of 1996 and I had gotten Donkey Kong Country 3 and Super Mario Kart (Player’s Choice). You can read last week’s article for my reaction to DKC3. But my reaction to Super Mario Kart was one of intrigue. I’ve never seen this game before and I wondered what it was like. It had Mario and it was a racing game judging from the boxart. I was definitely moving into uncharted territory here. So after playing a bit of DKC3, I power on Super Mario Kart. It was pretty enjoyable. I got some items, used them in the race along Mario Circuit. But the magic really started when I got the red shell. It homed in on my target, and the most satisfying “boom” in racing game history played out. From then on, I was hooked on Super Mario Kart.

My memories are somewhat weird. So before I get there, let’s get to the normal stuff. Now we all know that as kids, we knew that there were three cups to win: Mushroom, Flower, and Star. I was sorta stuck here, playing the same 15 tracks in the Time Trial mode. Not sure how I got it to appear, but when I went to 100cc and was choosing a Cup, I noticed “Special Cup” was grayed out. I wondered how I was supposed to get there. I eventually figured out that I had to get all gold in all 100cc Cups. When I came back to the cup selection screen, there it was, the Special Cup. It whooped my ass as I had no idea where to go and all the racers were kicking my ass. But nothing could prepare me for Rainbow Road. I practiced every Special Cup track in Time Trial. But god this beast was a bitch. I had to contend with Thwomps that spun me out, aggressive as hell racers, and most damning to all Mario Kart fans: no guardrails. Your driving could suck ass in every other track and you’d still make it to 1st thanks to a nice haul of items. But here, you had to be good all-around. Not only did you have to use items well, you had to avoid items laid out on the ground and drive good. Eventually, I finally beat the Special Cup and got a Silver trophy. We’ll come back to this later. 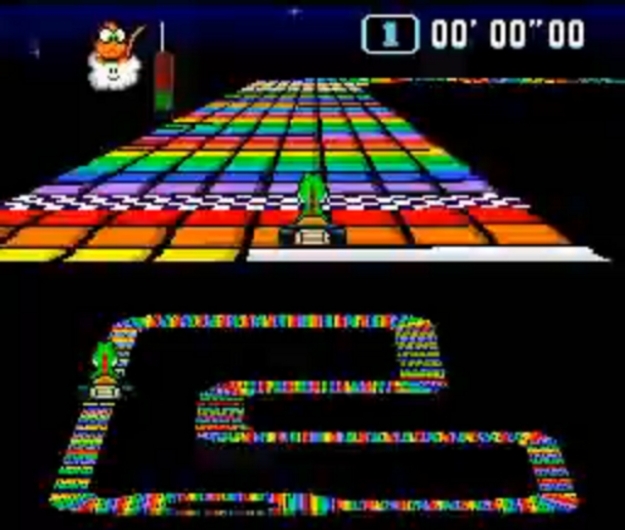 Now onto the weird stuff. First, I wondered what the battle mode was about. So loaded it up and saw that it was a mode where you didn’t race, but instead threw items at each other to see who can take out all of whose balloons. I still primarily played this by myself, but I eventually got my sisters and my cousins to battle me. It was awesome. Then something interesting happened. Normally, when you’re the loser, your car slows down after getting hit and your racer will just sulk and mope around. But if you happened to hit the wall after getting hit (and losing you last balloon), you would stop mid-spinout and still have control on the Win-Lose screen. I don’t know why but this humored me so much. I would drive around, trying to get more items and throw them at the cheering winner like a sore loser. It was pretty damn funny seeing the winner eat those and keep cheering like, “I won! Bitch be cool!”

Next was my first instance of nerd rage at a videogame. I had gotten the SN Propad for the SNES at some point in my childhood. We’ll talk about how awesome this controller was some other time. So then, I had much difficulty trying to get a gold trophy in the 150cc Mushroom Cup. This mode was brutal and I wanted really badly to Gold Trophy every Cup in every Engine Class. So here’s the scenario: I was in the last track of the Mushroom Cup, Mario Circuit 2, and getting any place other than 1st meant getting silver. But nu-uh, I wanted a Gold. I already got silver here. So, I was bobbing and weaving, trying to avoid thrown items as much as I can and using items in the best ways possible. I was trying to survive. Then, came the turn before the jump. I was in 1st, passing Koopa Troopa. The jump came up, I jumped, did the last turn before the finish line, and… FUCKING KOOPA TROOPA passes me right there and he takes 1st place and wins. I still remember me just gripping my SN Propad in unrestrained rage and yelling “kooooPAAAAA!” I threw the controller on the floor and broke off a piece of it (pictured). “Oh crap.” My mom was gonna take a chancla to my ass if she saw this. Thankfully it was only cosmetic damage as the Propad still worked. So I took some tape and taped the broken piece back together. 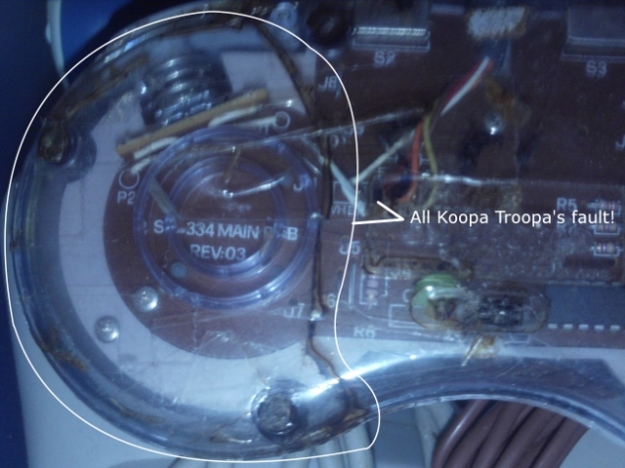 I learned a valuable lesson that day: Koopa Troopa’s a dick.

Much of the music in Super Mario Kart is pretty damn catchy. Many remember the music as classics, sometimes edging out its sequel, Mario Kart 64. Personally, I like them just for the nostalgia value. The compositions themselves are pretty simple aren’t really setting eardrums on fire. But there’s two themes that really stand out to me and I’ve always adored once I gained an appreciation for videogame music in the late 90s.

Told we’d come back to didn’t I? As much as this track made me nearly break my controller (Koopa Troopa…), there’s no denying that this song was awesome! Outside of Bowser’s Castle, Rainbow Road’s theme was catchy, upbeat, fast paced, and got your blood pump for the last race of the Special Cup. While some elements of the song never really got carried over into other Rainbow Road themes like MK64, MKDD, or MKWii, it’s remembered by many a gamer today and certainly won’t be forgotten.

This is what you’re greeted with when you beat Rainbow Road and get either Bronze, Silver, or Gold. I never knew that a racing game would have ending credits, but they did, and this was the first one I saw. It felt really satisfying seeing this play out listening to this. After the tense atmosphere of the last race, it’s nice to sit back and take in your victory. When I gained an appreciation for videogame music later in the 90s, I liked this theme even more. I’m not sure what it is about this song that I like. But It always felt good getting Gold in the Special Cup and hearing this.

And with that, I wrap up the Retro Weekends holiday special. Or do I? Well, it seems strange of me to put up an article on Christmas Eve (next Saturday) since you there reading this might have plans. Maybe you’re going to see family, gotta do some last minute shopping, or you gotta set up the house for your big family get-together. Well, how about this: next week, come here early, maybe 8:00AM-ish, and we’ll talk about an event that forever changed my gaming habits.