What’s the goriest game you could think of? I’ll give you some time…. Okay, now how about the Super Nintendo/Genesis, can you think of a gory game for that one? Got some? Good. Now how about the NES? Not a lot huh? Well, that’s the point. The NES wasn’t really known for having much gore in the games that released on it. While there were some games that skillfully dodged Nintendo of America’s Judeo-Christian-Puritan-No-Sex-No-Violence Morality code, there were some that made your wonder “How the hell did this make it past the censors?” One of those games was space-shooter Abadox.

The Inner War Is Already Lost.

It’s the year 5012. The planet of Abadox is taken over by an alien creature called Parasitis. Instead of destroying it Marvin-The-Matian style, it eats it. No seriously, it devours an entire planet. The military is useless in this fight and they retreat to a hospital ship. They have everyone, except for Princess Maria. Not willing to leave their Princess there (rather than leave her ass there and start a new non-monarchy government. It’s 5012 for crying out loud!), they send one man down into the bowels of Parasitis. Natsume developed this game, and may look similar to Konami game LifeForce, another game where it looks like it takes place inside the organs of something. The sound effects may also sound similar to Konami’s sounds, as the composer/sound designer Kyouhei Sada for Abadox also worked with Konami on some games like Contra. Strangely enough for a game with disturbing visuals like this, Milton Bradley published the game for U.S. release.

I’m going to be completely honest here. I don’t remember when, where, or how I got this game. This is the case for many of the NES games I have. So I’ll just tell you what I remember when I first saw the game on the screen. I remember us (meaning me and the family) having trouble getting this game to work. It would start up all glitchy. All forms of hyperventilating were no good, so we broke out the rubbing alcohol to get this bitch a-working. In the midst of all the trial-and-error, I remember the rather explosive sound that the title screen presented (you can see it up there). I’m here wondering what that was since it was still glitchy. It was finally fixed and there is was, in large blue letters with blood on the bottom: Abadox. It was a space shooter. But as a young kid (I think around 1994-95), it sorta grossed me out. 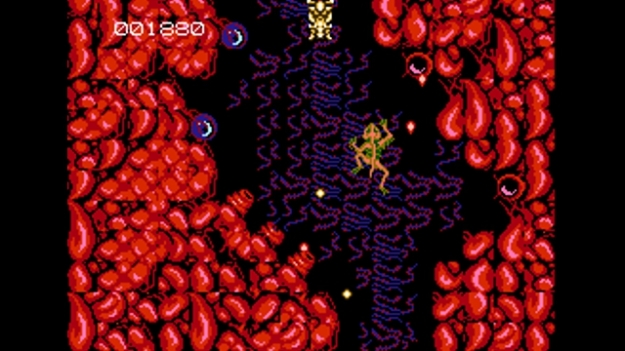 The second stage. Without. A. Doubt. I thought the brainy… wormy looking first stage freaked me out, once I made it to the second stage, it gave me goosebumps just looking at it. The walls pulsated like a heart and it was really bloody. Even my sisters were like “iiiiill” when they saw this stage. Mixed in with the stage is the mechanical parts of the planet that once thrived there. Just as memorable as the bloodiness of the stage was the difficulty of the second half of it. Gone was the wideness of the first half. Now you have to navigate tight corridors while dodging enemies and bullets. The laser and homing missiles come in handy here, but it all goes to shit once you die. Like many other shmups at the time, dying once meant losing all your powerups and reducing you a man on a suicide mission. When I got older, I was able to beat this stage, but just barely.

The stages following this were relatively tame compared to this. Stage 3 looked a bit more normal. You were still inside the alien, but this predominately while stage recalls no bodily organs to mind. Stage 3-2 had you navigating the nervous system of the alien. Nothing big. The forth stage was vertical scrolling again. Still tame. Then the end of Stage 4-2. Everything went quiet. All you could hear was a faint, foreign hearbeat. Then what looked like a fish shows up. The battle has yet to start. This fish like thing takes up the middle of the corridor, so you have to take either the left of right path. I was wondering this whole time what I was going to fight since the heartbeats were still pounding. Finally the boss music starts, but I’m still moving, and I’m on the right side. Then finally there it was, the tail end of this fish, an eye… on the left side. “Crap…” I said to myself as I had to maneuver over to the left side, being careful to not get hit by any stray bullets. I moved into a spot where I would be untouchable and let my homing missiles to the work. After several attempts, I beat the boss and advanced further. 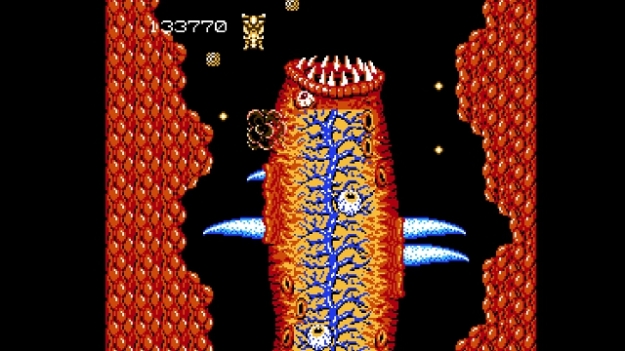 Now horizontal scrolling Stage 5 was the next challenge. The mechanical parts of the planet were more prevalent than the alien parts. Things looked a bit normal. But damn did things get difficult. Enemies were taking more hits to kill, and the corridors were getting smaller and tricky to navigate through. But the boss of 5-2 was. A. BITCH! Even when I was older I couldn’t beat that freaking robot. While dodging all these bullets this thing was shooting at me, I was here trying to figure out what exactly I was supposed to hit. Was it his arm? His legs? His head? Panicking, I kept losing. Eventually I gave up on the game after repeated attempts. Recently, while formulating this article, I looked up a video to see what exactly I was supposed to hit. It was his heard this whole time. But it’s a hear target to hit, and my reflexes were terrible back then (I gotta thank Suiko and Prota for making my reflexes crazy fast now).

The music was done by Kyouhei Sada, who worked with Konami on games like Contra and Lifeforce, the game that probably inspired Abadox. The soundsets used for the music may sound familiar to any Konami fans out there. While not as memorable as Contra, the music of Abadox still has some nostalgic value to me.

The song itself is not that spectacular, but it’s the first stage of the game and it’s bound to be remembered. The beginning sounds cool, then kinda mundane, then cool again. It sets the tone for the game, depressing, but tense. The war is already lost, as stated before. You’re just there on a search and rescue operation, not really to get your planet back.

Besides the really disturbing look of the level, the song is pretty cool. The way it starts when when actually playing the game is awesome too as the first wave of enemies zigzag toward you from the bottom to the top. The weird time signature of the beginning also fits well as the enemies now come in droves unlike the first stage. And things get really hectic in the second half of the stage.

It was such a breath of fresh air to hear this song as a kid. After getting my ass handed to me multiple times on the second stage, being on this stage was like a mini-victory. For the music, I’m really liking the synth work and the melody. I’m not too sure what body part of the alien this stage is supposed to be, but the nerve part of the second stage fits well with the music. You’re in the nervous system. Things are tense, but you gotta be calm, like the song.

And there we have one of my first exposures to videogame gore. It gave me goosebumps as a kid. Looking back at it now, it just amazes me how this game existed in on the NES with NoA’s strict policies. I guess gore was okay back then if it was coming from an alien, like how red blood is a no-no but green blood is A-OK. The difficulty had weird spikes sometimes, but all in all it wasn’t too bad a game. Thankfully, it had infinite continues, something not many shooters had at the time.