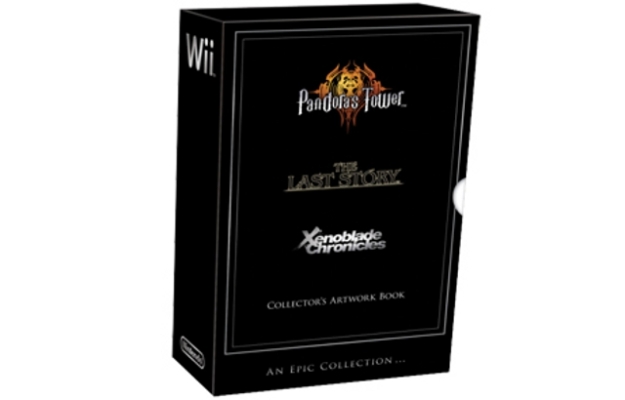 I want to cry. So… so much. While Nintendo of Europe has shown how awesome they are by being the bigger man by localizing the three games and giving them awesome collectors editions, they went one step further and created this. Exclusive to HMV, the box came with an artbook depicting concept art for all three games and left extra room to store your three games, Xenoblade, The Last Story, and Pandora’s Tower. Note that the box does not come with the actual games themselves, nor is this the Limited Edition box for Pandora’s Tower (it has its own LE).

You got this if you pre-ordered any version of Pandora’s Tower. Prota tipped me on this during a Spring Break hangout at the ol’ campus. I couldn’t believe it. Then he showed me it on Facebook. My jaw dropped into the pits of Tartarus. For a while, both links lead to missing pages on HMV. But the Limited Edition on has since returned (though whether or not you get the box with the game is still a mystery). While I thought that image you see up there was fake, this video proves that it does exists and that NoE are the kings of trolling the hell out of us American gamers. But hey, if you got the disposable income to get the box somehow, you can still put your NTSC games in there. I probably would.

Again, thanks to Prota for the tip.