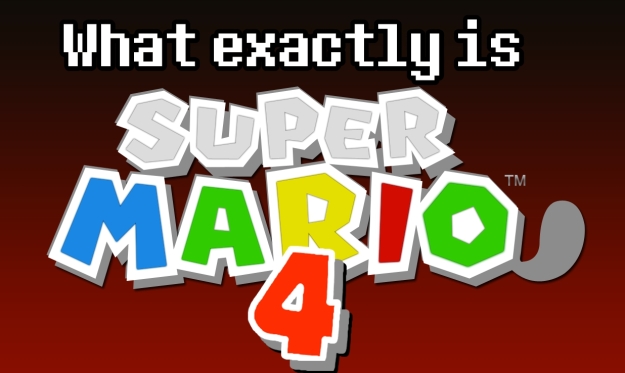 Before I begin the speculation, let me bring everyone up to speed. Not too long ago, gamers discovered that Nintendo had registered supermario4.com. When you go there, it redirects you to Nintendo’s country selector. Now normally when you enter some bonkers domain name, either you’ll go to a “domain not found” page, or a page from a domain squatter. But here, you can see that Super Mario 4 is most certainly Nintendo’s. Then in an interview with Korean site Betanews, Miyamoto confirmed that his team was in fact making Super Mario 4 for the Wii U. However, he didn’t specify what exactly this new Mario game would be: a 3D or 2D platformer. Here’s where we start guessing what this could be.

Now this explanation might be a little more straightforward. Super Mario 64 was the first. Then the second was Super Mario Sunshine. The 3rd entry was Super Mario Galaxy. SMG2 is not a canonical 4th entry as it was more of an expansion and tied to Mario Galaxy (like Final Fantasy X-2 and XIII-2 to their respective prequels). So that leaves a fourth entry open. Now some might think that Super Mario 3D Land is the fourth entry. However “Land” suggests that this is part of the handheld Super Mario Land series. So we still have an opening. Plus, look at the domain and titles. Super Mario 4 lacks “Bros.” in it. All 3D platformers don’t have “Bros.” in the title either. So judging by this, Super Mario 4 might be a 3D Platformer.

What ever the case may be, we can rest assured that the Wii U is getting a Mario game. The question is when. If Nintendo decides to show Super Mario 4 at E3 and shock the audience by announcing it as a launch title, then this will be the first time a Nintendo Console has launched with a new Mario game since the Nintendo 64 and Super Mario 64. Let’s just hope Nintendo doesn’t rename the game Super Mari-U.

1 thought on “What Could Super Mario 4 Possibly Be?”