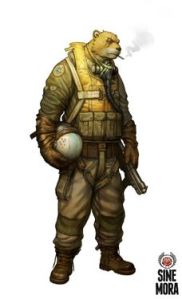 This isn’t the Fox McCloud your brother grew up with

Sine Mora is a side scrolling shoot ’em up game exclusive to the Xbox Live Arcade that has you controlling a team of time traveling animal pilots trying to stop a crazed serial killer from committing genocide on their precious world. The game has been praised by critics for its fresh take on game modes, story (which can be hard to understand) and gameplay of this type of genre. Now the possibility of Playstation holders being able to play this game is coming to reality.

By Grasshopper Manufacture and Digital Reality, Sine Mora came out in March of this year on Xbox Live Arcade. The response that this game has been receiving has allowed the developers to bravely release the game later this year for the vita (which was shown at E3). It has been confirmed by publisher Balazs Horvath (Digital Reality) that the game is also coming out for the Playstation Network later this year on December 31, 2012. There has been no confirmed price but knowing how these digital store games work when going multi-platform, it is safe to assume it will be priced the same (which goes for $15.00 on the Xbox live arcade).