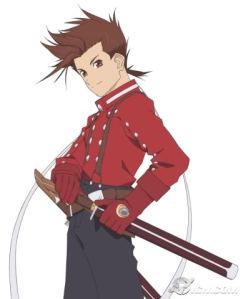 The main protagonist of Tales of Symphonia, one of only two Tales games released for Nintendo systems in North America. Will we see him join the fight?

We all know Nintendo’s Super Smash Brothers is in development for its next installment. The lead developer guiding this project is Masahiro Sakurai of Hal Laboratory using Project Sora (the creators of Kid Icarus Uprising) as his development team. It seems now that Nintendo thinks they need some extra hands on this project by introducing Namco Bandai as a co-developer.

Yoshito Higuchi, known for producing Tales of Vesperia, has been chosen to direct the game but still working alongside Masahiro Sakurai. Yoshito Higuchi is not coming alone though as he’s coming along side with Tetsuya Akatsuka (who is the art and sound director of the SoulCalibur series) and the development team of the Tekken series.

This is interesting news indeed. Could we possibly get any guest characters from the Namco Bandai side?  Can we get a Tekken or SoulCalibur  character? Or maybe the rarity of seeing a Tales of Symphonia character? Whatever happens we are on the trail of this giant as it continues its development.

3 thoughts on “Smash Brothers Gets Some Extra Hands”