Sandbox games are not typically the most enjoyable experiences for me.  Aside from Infamous 1/2, Red Dead Redemption, Crackdown…. alright, maybe it’s just GTA that I think sucks ass.  Those early trailers got me pumped really fast, and the game was quite well advertised.  There’s no Wei they could fuck up a game like this, right?

Just to get it out of the Wei, the protagonist, his name is Wei Shen, and yes you can expect a bunch of shitty puns in this review.

But damn, where do I begin?  There’s just so much to do in Hong Kong — from street races to karaoke and my personal favorite, cock fighting — there’s a wide variety of possible activity in the city.  The game can be cleared pretty fast sticking to the story missions (I almost had a heart attack when my stats said I was over 30% through the story in 4 – 5 hours of gameplay).  Hong Kong isn’t exactly huge either, but thankfully my worries subsided once I realized how dense it is.  Sometimes its impossible to walk a corridor without accidentally shoving somebody; I felt like a dick having a bunch of people curse my name all the time.  In contrast, the roads don’t feel as populated unless you’re doing a motorcycle street race — that’s when every asshole driver wants to come out and send you flying off your bike.

Some drivers have no problem running you over either… jerks.

Not only is the city full of events to participate in, there are also things to discover along the way.  Health shrines extend your maximum health with every five you find.  Lock boxes containing anything from money to clothes or even guns are scattered all over the place.  There are also cameras that can be hacked and used to make arrests just in case you need those extra police points.

By the Wei, our hero has the benefit of being both an undercover officer and a triad member.  There are skills that can be bought by leveling up your police/triad ranks.  Triad rank is earned through being a badass in story missions while police rank is earned both by observing the law in story missions, solving cases or making drug busts.  There is also a set of passive bonuses that are earned as you earn higher “face” points.  Face can be earned by running errands for people and street racing.  Each of these rankings come with their own sets of bonuses for Wei.  There are also extra attacks that can be learned by finding the 11 jade statues in the city. 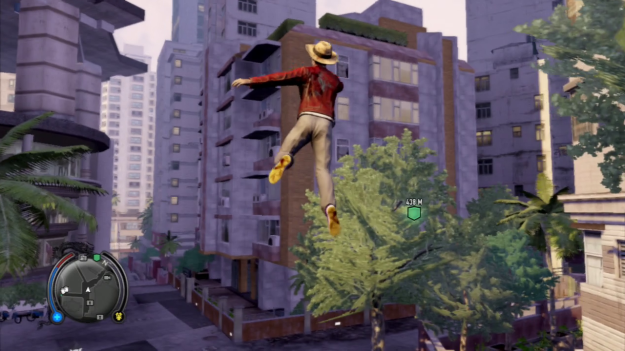 If I’m talking about upgrades, we might as well discuss how combat functions.  Damage is typically dealt in two Wei’s : hand to hand or bullet to face.  Running people over is also an option (I’m looking at you, asshole in the previous picture).

They even mention it in the story : firearms aren’t easy to come by in Hong Kong.  Most scores here are settled through fists, and the occasional knife.  Combat is very fluid, with one button for regular attacks, one button to grab or do a particularly nasty attack with a weapon and one button to counter.  Regular attacks can become a chain of punches by tapping the button repeatedly.  Stronger strikes can be done by pressing and holding the attack button following anywhere from one to four punches.  Grabbing the enemy allows for another pool of moves to be taken advantage of, including some that break limbs.  You can also do environmental kills through grab, but they tend to give low triad points. 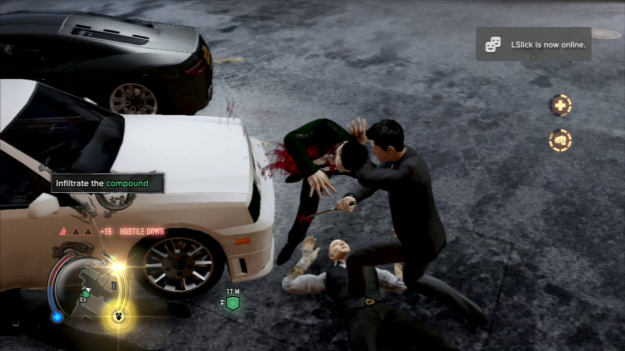 A good knife kill on the other hand usually scores well.  Also, I see you logging in there Mr. Slick.

I like that they made the counter system forgiving.  The enemies glow red well before attacking, and a counter is usually guaranteed if you hit the counter button anywhere from the moment they glow to the moment they hit.  A failed counter leaves Wei wide open for attack, however.  Since free running plays a big role in Sleeping Dogs, you can bet there’s some attacks that involve running (I haven’t used them much though).
There are times that running into the enemy might get your character blown aWei.  That’s where guns and cover come in handy.  Gun combat is sorta like any other modern third person game.  You can blind-fire by tapping the shoot button  or hold down an aim button before pulling the trigger.  Guns can also be fired from vehicles including cars and boats.  Because you’re still technically driving the vehicle while aiming a gun, the game is nice enough to go into slow-down mode, so you can get a few good seconds in before having to worry about the inevitable wall ahead.

Now that I think about it, it’s very easy to dispose of the police in this game.

This slowdown occurs in gunfights on land too.  Jumping over cover gives a few seconds of slowdown while every headshot to the enemy increases the remaining time before every surviving triad can try to gun you down. 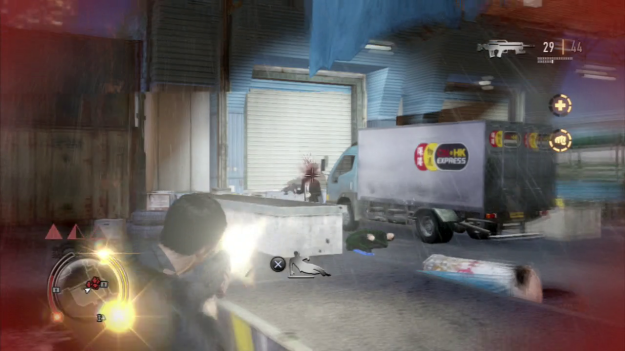 I feel sorry for this guy. Also, this helped trigger my “face meter” (see yellow bar on bottom left). Aside from other bonuses, Wei can regenerate health, which means this headshot probably saved my ass.

While hand-to-hand and gunfighting both go in depth, none of that would matter if the game turned primarily into a shooter the second you got your hands on a gun.  The developers go out of their Wei to ensure that there is a perfect balance between martial arts, gunning people down and driving action.  The whole hacking system feels a little tacked on, and doesn’t get much use aside from opening lockboxes and hijacking surveillance cameras around the city.  It’s fine with me who came for the action.

I liked the story in Sleeping Dogs.  Not an ending I was expecting, and it’s great that everything gets resolved.  As for music, there is a variety of radio stations with a little something for everybody.  All it really needed was this song to be awesome though.
Character development is another plus.  At first your crew members seem like everyday disposable thugs, but by the end of the game, even though I still don’t remember most of their names, I’ve taken a liking to them.  Even Jackie who I only remember because the first thing I thought when I saw him was that he looked like Michael Jackson.  Even him I found myself rooting for towards the end.

The foreground has the touching profile of a man deep in thought after certain serious events. The face on Wei in the background is the perfect emotional counterbalance.

So how does Sleeping Dogs Wei against other open world games?  While the city seems smaller, that isn’t necessarily a bad thing when it’s packed with so much to do.  They even have these random score challenges that get ranked and tell you where you stand among other friends who play the game.  If you’re like me and enjoy showing your buds who’s boss, there are a bunch of these challenges to participate in, and it’s not like you have to select the challenge from a menu, it starts automatically for instance if you start running over pedestrians, the “Hit-and-Run” challenge starts where you have to keep running people over.  If a certain time passes without hitting somebody, the score is logged and you have to start over.

It’s a small feature, but also icing on the cake for one of the best open world games I’ve played.  I hope they keep the franchise going, because I want more already.  Wei to go Square-Enix!  You’ve been doing a shitty job in development, but between games like Deus Ex : Human Revolution and Sleeping Dogs, you’re still a publishing juggernaut.

For my competitive friends, I’ll see you on the streets!