So, I like Dragon Ball. Yes indeed, do I like Dragon Ball. Actually, it would be more fair to say that I love Dragon Ball. Like most anime fans over 20, I grew up on the series, and my love for it and all its trappings, both positive and negative, persists to this day. Sure, the more rounded knowledge of quality anime afforded by age has taken some of the luster off the series, has highlighted some of its more detrimental quirks. But it remains a beloved member of my animation pantheon, and a fandom codeword for men of a certain age the world over.

And so, every time a new video game comes out, particularly actioners and fighters, I perk up and take notice. That the show famous for muscular men punching eachother through the earth’s core would lend itself well to high-impact vidya games should surprise no one, and down the years we’ve gotten some great ones, both in and out of the fighting genre. Budokai 3, Tenkaichi 2 and 3, Raging Blast, Attack of the Saiyans, Dragon Ball Adventure. And a few years back, we got Dragon Ball: Xenoverse, an honest-to-God canon-expanding, action/RPG/fighting game hybrid where you make your very own character and go on time travelling adventures alongside classic heroes and villains from the series. And it was good, so good. And it was flawed, so flawed. And it was frustrating in ways I cannot even describe. 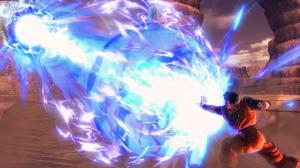 So, is Xenoverse 2 also good? Why yes, yes it is. It retains the gameplay system of the previous installment, which focuses on high speed maneuvering and simple button combos mixed with customizable energy attacks and stat-building, but layers it all with some spit and polish. The world is bigger and more involved, the music is  more catchy and has more character and several aspects of the first game, such as the vicious random chance-based mission grinding for rare items and obtuse mentor-appearing conditions and various little bugs, have been ironed over to be less offensive. And no matter its vices or virtues, nothing can take away from the feeling of traversing the game’s massive hubworld, interacting with famous characters and NPCs, doing side missions and finding new and interesting sidequests, all with the classic arsenal of famous sound effects and visual trademarks so characteristic of the Dragon Ball franchise as a whole. When everything is running smoothly, Xenoverse 2 offers the most varied, most satisfying and most Dragon Ball-feeling gaming experience I have felt since before even the first one.

But, is Xenoverse 2 also flawed? Why yes, yes it is. Firstly, the game feels more like an evolution of the first game than an out-and-out sequel, with huge swaths of the plot repeating, many missions feeling ripped straight from the first game and some aspects feeling more like ideas for expansions than fully fleshed out sequel features. There’s a host of little audio and scripting bugs, with particularly pervasive conflicts between spoken english dialogue and the subtitling which makes me feel that this might have been a bit too rushed on the localizing side. And while many of those flaws were indeed smoothed, many of them were not eliminated outright. The game will still put you in ludicrously unfair scenarios, certain combat systems will just plain not work from time to time (ESPECIALLY Expert Missions, holy shite), the conditions for even getting the chance to snag rare loot tend to be obtuse and there’s a dearth of playable participation from classic characters since the game is focused solely on the adventures of your own created character, which given my love for the classic cast and desire to play as my favorites does grind a bit, but that is perhaps a personal peeve. 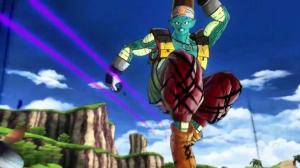 Fight famous villains! Train with legendary heroes! Save time and space, all while looking like an absolute friggin’ jabroni! Woohoo, Xenoverse 2!

And yet, despite all those frustrations, it’s still on my list. Why is that? Well, the answer is right there in the award title. While it is true that the many improvements to the formula had a huge part in my enjoyment of the game, it is even more true that it simply scratches an itch that is always happy to be scratched. When I’m flying around Conton City, my power aura flaring up around me as I soar through the clouds, drop percentages don’t matter. When I’m accepting requests from Nail to protect Namek from Frieza or going on missions with Great Saiyaman for great justice or just giving Buu some food so he can fart out some kids, I don’t care about win conditions. When I’m skipping through town with a milk crate for Krillin, or flying to the peak of a Namekian rock formation to ask Cell to train me, I don’t care about any plot similarities to the first. And when I’ve just gotten through a quest that somehow involved me fighting Metal Cooler, Cell and Janemba in some bastardized version of the show’s original plot, throwing energy beams and grappling combos like they were rice at a wedding, nothing else the game does matters one bit. It’s not a perfect game, hell it’s not even a fantastic game. But it is a fun game, and a great Dragon Ball experience, and for a guy who remembers the Ocean dub of the first arcs, who owns every movie and most of the show and can remember late afternoons watching those Toonami promos for those early episodes, that’s all the justification I need to put it here.

Music Choice: The game actually has a surprisingly eclectic mix of musical styles, from the dubstep techno-style battle themes of certain enemies (*coughCoolercough*) to the chipper mentor battle music. But it’s those hubworld themes you hear the most, and while that first one may have made me want to kill an ostrich, the others were varying degrees of good, with the third one being especially memorable for just how perfectly Dragon Ball it sounded. Those cymbals. That energetic trumpet. That weird jazz edge. It genuinely sounds like something right out of Shunsuke Kikuchi’s original score for the series and that’s just about the highest compliment I can give to this song.

Imagine, if you will, meeting someone for the first time. You’ve heard good things about this person; the schools they’ve gone to, the things they’ve done and the mutual friends you two have. With such a pedigree, the pre-introduction hype is pretty strong, and you look forward to a pleasant evening in good company. But when you do meet them, they smell like vomit and their hand is sticky when you shake it. Two immediate details, offensive to multiple senses, and suddenly the near future seems less “Pleasant soiree” and more “Oh God please don’t touch me again.” You hear throughout the night that they’ve told some great stories, and you’re sure that you’d probably have a pleasant time if you hung out with them, but you can’t forget the sensation of that first handshake. And even if you could, the smell is still lingering about them like a miasma of shattered hopes and irregular bathing.

That is a functionally perfect analogue for what it was like playing Tokyo Mirage-fuck it, I’m not typing that whole name, let’s just call it “Timseff.” See, Timseff had a pedigree that dreams are made of. Fire Emblem and Shin Megami Tensei, two series who are titans in their native Japan and strong cult phenomena here in the states, joined together at last. What could it be? Would it be a medieval setting with Fire Emblem characters fighting off the frequently disturbing, unsettlingly grotesque and frighteningly Freudian demons of Megaten, with that series’ mix of fuck-nasty traditional JRPG gameplay and morally-flexible storytelling to spice up the proceedings? Or maybe it could be a modern post-apocalyptic Japan, with all the trappings of classic Megaten but played through the eyes of the typically-optimistic cast and ideology of classic Fire Emblem games, with that games slower, more tactics-heavy gameplay combined with the design aesthetic of classic Kazuma Kaneko? Maybe throw some Fire Emblem family generations stuff, or Megaten demon fusion, I don’t know, but fuck were the possibilities vast and exciting!

Instead, they decided to make their own thing, with merely a hint of its origin series’ flavors. Which generally, I would see as a positive. Good for you Timseff, striking out to make your own identity! Of course, that inherited flavor will still be pretty strong though, right? After all, they’re both beloved institutions in their genres and you want at least a little of their goodness included, if just for the fans. But instead of the complex, gritty designs of Megaten or the clean, Arthurian-style warriors of Fire Emblem, we got this shit. 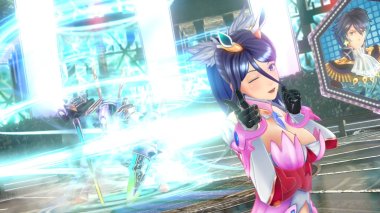 Instead of the complex leads or supporting casts of either series, we got these toodlefucks. 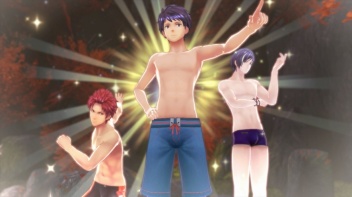 Instead of the symbolically dense or classically evocative monster and character designs of EITHER series, we got YU-GI-OH PONYCUNT.

What the fuck happened? No, really, what the fuck happened? I’m not asking rhetorically, I really want to know WHAT THE FUCK HAPPENED. How do you have access to two of the most respected franchises in gaming, franchises with decades of lore and character and spirit and playstyles to pull from, and somehow end up with the most generic, banal, cookiecutter anime bullshit that I can possibly imagine? The setting has neither the memorable grime and horror of Megaten nor the depth and structure of Fire Emblem. The characters lack the relatable personalities and well-constructed psyches of the Persona series that this is so clearly trying to be like. The setting is terrible, the plot is absolute cliche, moe-baiting trash with some of the most infuriatingly flat characters I’ve seen in a while. There’s something almost uncomfortable cynical about the game, such a transparent desire to appeal to as many people as possible with its bland, shitty OVA-quality aesthetics and pandering, unchallenging story that the game just left a bad taste in my mouth for the roughly five hours I played it before stopping. Even the gameplay felt nothing like a fusion or even an aping of the systems of either of its parent franchises, and instead felt like its own barely functioning animal.

And yet, people I respect have told me that, although the story and characters and music never rise above whitebread mediocrity, the gameplay at least evolves and challenges as the game proceeds. Yup. The child of the classically hardcore Fire Emblem series and the morally multifaceted and equally-hardcore Shin Megami Tensei series has “good combat.” So while I may return to it some day, if only to see what I can salvage from this dreck pool, excuse me if I don’t go running to pop it back into my Wii U ahead of the dozens of other games I have that do more than one thing well. The progeny of two noble houses lacking either ancestor’s blessings or charms, Timseff doesn’t merely shit the bed. Instead, it shits the bed so hard it blows out the bottom of said bed, and then the floor beneath it and manages to kill the downstairs neighbors with the ensuing force shockwave.

And now, since I have no music choices due to not playing long enough, let me just find an image emblematic of the game’s grievous lack of identity or charm. Something that looks like it was cribbed from any number of lowest common denominator shows or games of the past-

There we go. Fuck this game.