At 6AM EST, the Persona event was livestreamed and kicked off with who I think was the voice actress for Teddie (well… she sounded like Teddie). After a brief introduction by her, Teddie himself showed up and began talking a bit about the series, or at least the bits and pieces I can understand since it was in Japanese. Then the games came, and there sure was a lot of Persona. Hit the jump and let’s take a look.

END_OF_DOCUMENT_TOKEN_TO_BE_REPLACED

I don’t care how many times I do these articles, I’m not calling P4: The Ultimate “P4U.” It just sounds dirty. Anyway, here we have footage of a location testing (or “Loketest”) of Persona 4: The Ultimate in Mayonaka Arena. Here we have a fight between Kanji and my homegirl Mitsuru. Things are still as fast as ever. One interesting thing that one of the youtube comments pointed out was that the blue bars under the life gauge have been changed to look like the backs of the Arcana cards from Persona 3&4. Pretty interesting. What other changes have you noticed? Point them out in the comments below.

Thanks to reader Brayan A. for the heads up. 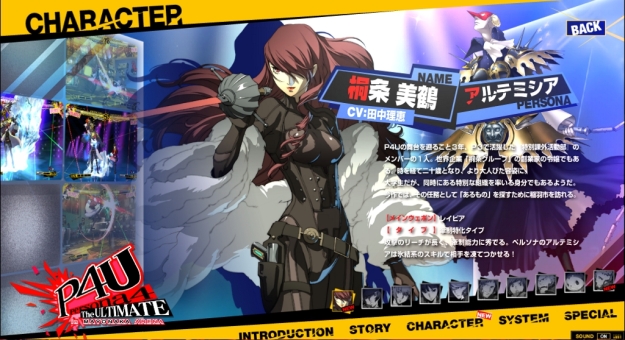 Atlus you cheeky bastards, leading us to assume that Aigis was the only P3 representative in that fighting game you’re making with ArcSys. Shame on you! But I digress, Atlus has revealed recently that Mitsuru Kirijo and Akihiko Sanada from Persona 3 will be playable characters in Persona 4: The Ultimate in Mayonaka Arena. Since this takes place some time after Persona 4, you already know these two aged when you consider when P3 took place. Akihiko has now lost his shirt and is sporting a huge scar across his chest (that looks like it came from a bear). Mitsuru now looks like a spy for the KGB and is now wearing a fur coat, and hot damn am I okay with that! They’ll be sporting their ultimate Personas, Ceasar and Artemesia respectively. The official website has been updated to show these characters. Screens after the break. Now if you excuse me… END_OF_DOCUMENT_TOKEN_TO_BE_REPLACED 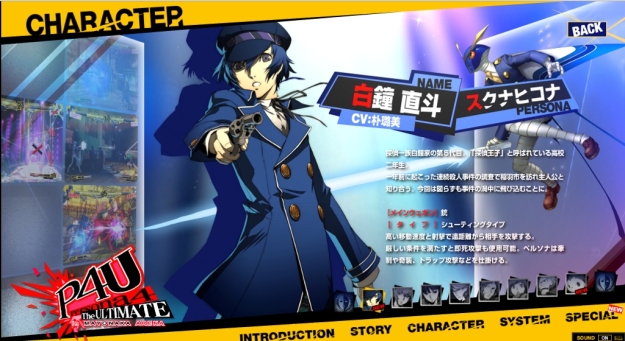 Big blogs, I am disappoint. How could you talk about Modern Warfare 3 and Skyrim and not talk about this!? This is big news here! Naoto and Teddy have been revealed as playable characters in Persona 4: The Ultimate in Mayonaka Arena, a fighting game being done by Atlus and Arc System Works (of BlazBlue and Guilty Gear fame). They’ve actually been revealed for some weeks already, but not a lot of blogs seem to be mentioning it. I guess it’s somewhat of a forgone conclusion that the P4 crew would be playable, but it doesn’t hurt to let the public know anyway. You can check the official website to see Naoto and Teddy (though the info is in Japanese). They’ve also added Twitter icons for any Twitters users out there to use. And for you wallpaper fanatics, they’ve got a wallpaper available a well. You can find those in the Special menu in the bottom. Teddy after the jump.

END_OF_DOCUMENT_TOKEN_TO_BE_REPLACED

Spotted at NicoNico Douga, we now have the first real gameplay footage of the new Persona 4 fighting game. As expected, the action is fast paced, and somewhat BlazBlue like (given this is being made by Arc System Works). And to answer fears of gamers thinking all the characters play like Carl Clover in BlazBlue: No, they do not play like him. Instead they simply come out to perform special attacks and super attacks. For those wondering how the button layout and configuration will be for this fighting game, it’s hard to tell. But from the little bit we can see on the lable below the screen, it seems to use a 4-button layout. The super meter seems split into three parts and counts from 0 to 200, so maybe some supers probably consume different amounts of bar.

Big thanks to Lewis, aka l-slick, for the tip!