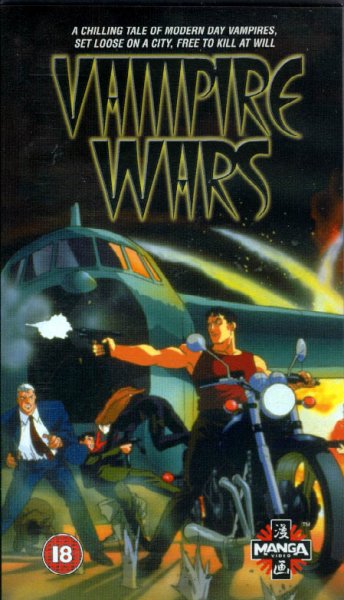 Do you like this image? Good, because you won't be seeing it in the film.

They say that great art can be measured by the extremity of the response it elicits in the viewer. Although I can definitely see their point, I don’t agree with that since it makes for too broad a definition. This is why we get people who throw fresh produce at a canvas and call it art, which then further implies that any child with basic motor functions can create art.

But let us, for a second, assume that this definition is correct. If it is, then Vampire Wars might be the greatest work of art ever created. Why? Because it inspires such a strong feeling of revulsion that one cannot help but respond to it. It is repulsive to all six of the senses (yes, even the illusory “sixth sense” is damaged by this crap) and is a truly startling example of how to waste an hour of your life. Get ready, folks, this one is going to be a doozy.

So what is Vampire Wars? It’s an hour long OVA based off of a 1982 novel by Kiyoshi Kasai. And thats about it. I’ve never read the novel, but one would hope that it shares little more than the characters and some thematic elements with this abomination, because if it does, then the combined affront to life represented by this film and that book might be enough to get the entire country of Japan prosecuted for crimes against humanity.

Let’s look at some of the elements that comprise this fever dream, shall we? In its favor, Vampire Wars is not a terrible looking show. Animation is consistent, and the whole thing seems to achieve its visual goals, at least, if those goals involve having the color palette of a boiler room. Character models are PAINFULLY generic when they aren’t bloody horrible, with main character Cookie (oh, sorry, I mean Kuki) looking like any generic beefcake one could find in any other film. We have short business looking guy, young woman type, big bruiser dude, and our vampire who makes the “Twilight” set look diginified by being a sparkly haired monstrosity reminiscent of “Castlevania”s Dracula if he was from Miami Beach…and retarded.

Music is horribly unmemorable in that way that only early 90s anime can be. But the voice acting, hoo boy, the voice acting. The voice acting is being done by people on both ends of the emoting spectrum. On one hand, you have our heroine Lamia (get it? like the mythological beast? It’s SYMBOLLIC!!) who sounds like she couldn’t be less interested watching insects have sex on a wall full of drying paint. On the other hand, we have hero Kuki, who constantly sounds like he’s trying to keep a rubber ball suspended in his anus. Even “tender” moments involve him sounding like McGruff the crime dog.

Oh, but none of these guys compare with our bruiser character, who’s name escapes me due to a combination of not knowing if they said it and not CARING. He sounds, I am not kidding, like The Claw from Inspector Gadget. I haven’t the slightest fucking clue why he sounds like this, only that it makes any scene he is in more ridiculous than it already is. And since the voice is coming out of a giant wearing a purple suit, they really had to try hard to make him sillier.

Since the whole thing apparently takes place in France, most of the characters seem to have gone to the Inspector Clouseau school of french speaking, making them slur the already ridiculous dialogue. This is most noticable when anyone adresses the main character. Now, I know “Kuki” is a real Japanese name, and it’s hard to say it in english without sounding like a Pillsbury commercial. But they don’t even try here, leading to the slurred phrase “Monsieur Cooockee” being thrown around a lot, which is about as devestating to any seriousness as you might imagine. The movie is ridiculous enough without all the characters sounding like they’re doing Krabby impersonations whenever they try to converse.

You might be wondering why I haven’t discussed the story yet. After all, a movie may be bad, but I could deal with all of this if the story was at least servicable. After all, one does not watch something called “Vampire Wars” for great storytelling, but a comprehensible storyline might make it just cringeworthy as opposed to an attack on all that is good. (By the way, SPOILERS AHEAD, although if you really care about this film, then you’re not worth my time anyway.)

Well, I can honestly say that this movie’s greatest sin is that it makes NO. FUCKING. SENSE! Nothing, not a single thing, is explained for most of the movie. Why does some woman run into a NASA base and blow herself up, screaming “VERISWALDI” in a voice that makes her sound like a deaf person trying to read Shakespeare? No clue until the LAST TEN MINUTES! And why do the vampires want Lamia? Again, last ten minutes.

The movie is a horrible assault on logic. It is unlogic. No one, not the villains, the heroes, or the fucking writers thought out how real people would react in any situation. If the government needed to find Kuki to request his help, why would they do so by murdering one of his friends? If the Vampires are so intelligent, why didn’t they ask for Lamia’s blood (of which they only needed a little) instead of sending the walking shampoo commercial after her? If logic were a scared little girl, this movie would be wanted in all 50 states for sexual assault of a minor. It is so opposed to realistic storytelling or progression that it should work for Hideo Kojima.

Oh, but that’s still not the worst. I think I should be grateful that the writers seemed to have come down with a severe case of syphillis before the writing, because the lucid part of the story is even more horrible. It turns out that the Vampires are from SPACE, and that they are part of a civilization that pulls power from spiritual energy, and they lost a fight against some other race of technologically advanced beings and had to hide. Their leader, Veriswaldi, was injured and went into deep sleep, and now needs Lamia’s blood to wake him. (Why? Who the hell knows, let’s just say she has a high midiclorian count.). It’s like an inverse of the Saiyan story from Dragonball, except, you know, for morons.

Do I really need to say how dumb the idea of space vampires is? It’s like someone gave the kid up the road who has to wear a helmet to drink lemonade a pen and said “here, write the first idea that comes to mind” and he wrote this after trying to see if he could discover Atlantis in his eyesocket with it. In ancient China, suggesting something so dumb was grounds to have yourself beaten upside the head with your own legs and those of your dead children.

Vampire Wars is a horrible, leprous monstrosity of the artform. It is what comes to the minds of every brainlacquered mook who says that all anime is dense and stupid. And yet, if there was ever a trial on the subject, I fear that this movie would be the ultimate evidence for the ones against anime. It is dumb, incomprehensible, and seems to have been made just so that the creators could see if the phrase “Cancerous tumor on the scrotum of common sense and reason” could be morphed into an animation. It is to joy and happiness what the olympics are to a quadruple amputee.

For the record, if you are someone who enjoys bad shit and making fun of it, then by all means watch this film. It’s fucking gold for that purpose. But for everyone else who doesn’t want to feel like their brain is being jerked off by some neanderthal with epilepsy, stay the hell away from it.