Last week, we covered a game that was one of my first games on the SNES, Donkey Kong Country. It met a sad fate when it stopped working, and I went without the first game for over a decade. Eventually I bought the game on the Wii’s Virtual Console, and all the memories started coming back. So this weekend, we’ll be talking about a rather elusive game for many gamers, including me. Physical copies of this game are somewhat rare and pretty expensive as many gamers that own this game aren’t willing to part ways with it. As the header image suggests, I’m talking about Donkey Kong Country 2: Diddy’s Kong Quest.

The Crocs are Pissed Now!

Nintendo had a hit on their hands as Donkey Kong Country staved off the threat SEGA’s add-ons presented, if there was any. Not only that, Rare Proved to Nintendo that they were capable of handling Nintendo properties. DKC sold many copies, and critics loved the game. So what was Nintendo going to do? Make a sequel of course! Latching on to a pirate theme and adding Dixie Kong into the mix, this was going to be a bigger game. Now that Donkey Kong was captured by Kaptain K. Rool, there was more at stake than a bunch of bananas. While DKC took place at Donkey Kong’s home (it has his face on it for crissakes!), now the journey takes the Kongs into enemy territory and into Crocodile Isle.

As I stated in last week’s Retro Weekend, my first contact with the game was the commercial. So in essence, the commercial you see up there made me aware of the Donkey Kong Country series. Interestingly enough, I don’t really remember this commercial all too well. What stood out to me was the game’s subtitle, Diddy’s Kong Quest and how interesting/funny it sounded. Little did I know as a kid, this was a play on “Conquest” and they simply just added “Kong” in there for a rather lame pun. As for playing the game, a friend of my older sister gave me a chance to borrow two games from her. I borrowed Yoshi’s Island and DKC2. Since I already finished DKC1, I was ready for a new game in the series. And damn was it crazy! I had gotten a second chance to play this game from a childhood friend of mine before he moved back to Mexico. Unlike DKC1, where I still owned the cartridge like a memento, I never owned DKC2. I once saw it on the shelf of an eletronics store near Hunts Point in The Bronx, but my mom wasn’t getting it.

In all honesty, pretty much the whole game can be a memorable moment, and there’s going to be a lot of gamers that are going to have different stories about the game. But if we’re talking about as kids and not as adults, there are several moment that come to mind that I remember when I was a kid. 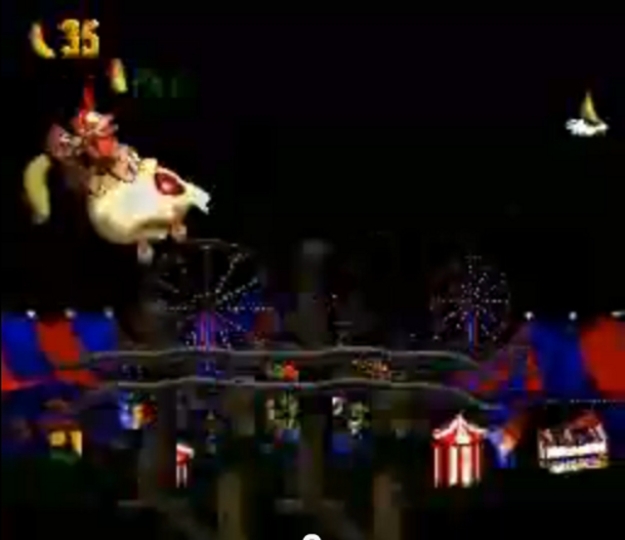 First, the Theme Parks. Since my older sis played the game at her friend’s house before bringing it over, she knew a bit more about the game than I did. Since I was in Gloomy Gulch  and played the Haunted House stage, she saw it and told me that there was a theme park in the game. I was like, “hah, really?” So, she took me to Funky’s Flights (which cost tokens this time around). Before she went to Krazy Kremland, I was amazed by how huge the place was! It was way larger than DK’s island. So, she went in, and took me to the rollercoaster stage. It was pretty damn fun! Fireworks, screams, being high off the ground. It was awesome.

Since I exhausted all the stages, I was ready to try and get further in the game. I beat the boss of Gloomy Gulch and thought it was the end of the game since I didn’t see anything above it. Well, there was something up there, and it was K. Rool’s Keep. I was amazed that there would be more. So I eventually arrived at Castle Crush. Holy crap was this stage difficult for me. There was a rising floor that I had to deal with, and not moving fast enough meant getting crushed between the floor and the ceiling. This was not going to be easy. I did manage to beat the stage and progress. Then I played Toxic Tower, which was almost as bad. Now there’s rising green liquid that meant instant death!

Finally, The Flying Croc. Just when I though I was at the end and I was going to save DK — I mean I was at K. Rool’s Keep after all — Kap comes in and is like “Fuck you, you got one more stage buddy!” So he pulls DK up from the Keep and I have one more stage to go through. While the Screech race was difficult, the battle with Kaptain K. Rool was quite a challenge. Like a dumbass, my first instinct was to jump on his head since it worked in the last game. Nope! I quickly learned that I had to throw cannonballs into his gun. Man, the patterns I had to deal with. Then the smoke he shot out that altered you controls. Then the invisibility! Then the teleporting behind me! Crap this guy was gonna wreck my shit! Finally after many attempts, I beat him and DK gave him the good ol’ Ralph Kramden treatment. Quite satisfying if I do say so myself.

Again, just like the moments, the music of DKC2 is heralded as one of the best in videogame history. Many gamers remember the soundtrack to DKC2. Since I never played the game again during my childhood, I couldn’t remember many of the songs (even Stickbrush Symphony!). I would be reminded of DKC2‘s music through Overclocked ReMix and ReMixer Protricity. Of course, YouTube played a role as well in reminding me of these songs. However, since this is memorable music, not favorite music, I’ll be going with what I remember the most. There are two that really stuck out to me during the long gap.

There’s something about that unique sounding synth that opens the song. It always sounded cool to me. Whenever I had my recorder me (those plastic flutes from elementary school), I always tried played that part. Whenever I tried reminding my sisters about DKC2, I always hummed that part to see if they remembered the game. Funny thing is, the rest of the song I never really remember. Only that opening always stuck with me throughout the years.

This is another song that stuck with me. Since this was a more upbeat version of Gangplank Galleon, it was easy for me to remember the song. It only played on one stage (it also played in another but right before the goal). That stage had Rattly in the forefront and it was a pretty fun stage to play in with the music playing. Like Forest Interlude, I also tried playing this on my recorder. It didn’t go so well.

Good news today is that this one game that I always had trouble tracking down I finally got on the Virtual Console. I played the hell outta this game and finally got reacquainted with the stages and the gameplay. It was like being a kid again, hurling treasure chests at enemies, flying through the brambles, and getting thrown the fuck out for not having enough kremcoins. While is easier than the first game (screw what the commercial said), it’s still just as fun to play.