In the 80s, Mario was not only the mascot of Nintendo, he was the mascot of an entire medium. Unlike the Pong Paddles, the triangle in space, and whatever the hell Pac-Man was supposed to be, Mario was just a regular man in some strange adventures. He was a recognizable face, and his games revolutionized the industry. SEGA was looking to cash-in and make a name for themselves with their own mascot. The 8-bit era produced nothing major, but that all changed during the 16-bit era. This weekend, we look back at Sonic’s debut in his self-titled game, Sonic the Hedgehog.

Before Sonic came into the picture, SEGA had a mascot by the name of Alex Kidd. He had big ears, chomped on lots of riceballs (or a sandwich if you were in the West), and punched everything. He had three games on the 8-Bit SEGA Master System, all of which had him going on some crazy adventures and beat bosses in a game of Rock-Paper-Scissors (no, seriously). While his games were solid and some of the best on the Master System, it just didn’t have the appeal that Mario had on the NES. So heading into the 16-Bit era, SEGA needed a new mascot, one that was hip, cool, and would compete against Mario. After some tweaks and some killing off of imaginary rock bands, Sonic was born. He was a fast rodent  and crashed through everything with reckless abandon. Compared to Sonic, Mario was slower and more methodic in his platforming. Sonic’s platforming was also methodic, but the reward for good playing was greater than what you could do with a Mario game at the time. To this day, debates still go on over which of the two mascots are better. But the two are just chilling nowadays, playing in the Olympics and whatnot. 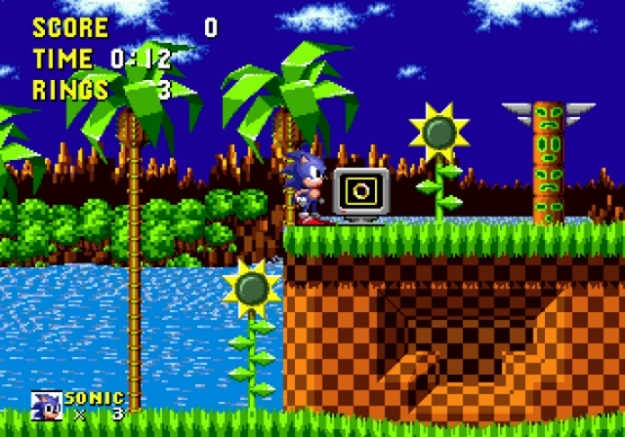 My first contact with Sonic came at a very young age, like pre-school time, and like I said in another article, much of my memory from that time is of the pre-school, and even then there isn’t much I remember. I remember the Green Hill theme playing and stuff moving fast. That’s about it. I think maybe around Kindergarten is when I remember getting to try the game out. A cousin from my mother’s side of the family had a SEGA Genesis and she had some games on it. She didn’t really allow anyone in there (or maybe I was just too scared to go in). But after being picked up from school, my aunt took over babysitting duties until my mother came home. One day, my cousin (who was probably in her mid-to-late teens) asked if I wanted to play the Genesis. I said sure. So she popped in Sonic The Hedgehog and I got to playing. It was a lot different from Super Mario. For one, jumping made you almost invincible, making it possible to kill enemies from the bottom. And the short bursts of speed was really cool. But I sucked pretty bad and switched to another game.

Around the mid-late 90s, my mom had gotten my older sister a SEGA Genesis along with Sonic the Hedgehog. She, and the rest of us, played the hell outta that game. I think one stage we just wanted to badly to  go to was Spring Yard. It was like being in a pinball game with cool ass music. So we’d have to suffer through Marble Zone to get to Spring Yard. It was hell as Marble call for more methodical platforming rather than speeding through it all. And it was balls-hard! We’d make it out of Marble with maybe two lives left. And Robotnik was hard here as he would be just out of reach to hit, and you had to jump to the other platform before you got burned. We would make it to Spring Yard and bounce of the bumpers like crazy. As much fun as we had with the place, all that would come to an end because of…

Labyrinth Zone. I hate this stage. My sister hates this stage. My other sister hates this stage. Everyone within a 3 mile radius of us hates this stage. Is it the enemies? Is it the layout of the stage (as its name suggests)? Or is it the water? Here, it was about trying to be as quick as possible without being fast. It was about careful playing but also about memorization. As kids, we didn’t know this as we would find ourselves drowning the poor hedgehog more than winning because an air bubble didn’t show up in time. We always just lost here and stop playing for the day. To this day we just can’t stand it. Hell, not too long ago my sis powered up Sonic Vintage Collection on the 360, and she saved and quit at Labyrinth Zone. “Wanna try it?” She’d ask me. “Hell no!” While I eventually beat the game on the Genesis when I was younger, it was all because of one neat trick.

One day a family on the other side of the building was having a party. My mom was friends with the mother, and we were friends with the kids. They were playing Sonic and they were at Star Light Zone. I never saw this zone before. I asked if they were playing Sonic 1 (since by now I played Sonic 2). They said that it was Sonic 1. I was amazed, wondering how far in the game they were. They reset the game and activated… the Stage Select code. I was like, “What the hell!? How’d you do that?” They were reluctant to tell me the code. But eventually they told me. It was Up, Down, Left, Right, A+Start. But I had to do it fast. I wrote it down, and continued watching them beat the Final Zone over and over again. When I came home, I powered on the Genesis and tried out the code. It worked, and I was off to try the other zones. Also, Starlight Zone was after Labyrinth Zone.

The music of Sonic the Hedgehog is almost as famous as he was. A product of the 90s at the time, much of his music reflected what was popular at the time. From Marble Zone’s slight Latin flavor to it, to Spring Yard’s hip-hop influence, to Starlight’s Janet Jackson-like pop tunes, almost all the songs felt familiar to anyone that played it.

Like World 1-1 in Super Mario Bros., the Green Hill Zone theme has become Sonic’s theme. Being a 1991 game, there are some shades of the 80s still in the theme. But those classic drum beats solidify the structure of the song and keep in tune Sonic’s hip attitude. This theme has stood the test of time, being remembered and remixed by SEGA themselves in games like Sonic Advance 3 and the recent Sonic Generations. The song has become timeless, becoming a second theme song to Videogame Culture (first being World 1-1).

What was popular back in the early 90s? Some good ol’ Old-School hip-hop. Lots of kids equated hip-hop to being cool (unlike today’s hip-hop, blegh). And it was cool back then and still is today. If you think about it, it sorta sounds like when a male and a female make a duet. Like, the male comes in and raps his lines during the body of the song. Then when the chorus comes in, the female sings her lines R&B style. Really cool.

Here’s a song that really sticks to you. While many other themes in the classic Sonic are fast paced, this one slows it down a bit to an almost serene state. The stage it plays on is sorta strange. It looks like you’re in the inner city when you get to the low part of the stage. But then when you get to the high part, you see a sprawling city. But it’s very calm, like the city has gone to sleep and all that’s around is the stars.

Sonic has seen better days than today. Generations seems to have rekindled that spark in the series. The original game spawned 2 sequels on the Genesis (Sonic 3 & Knuckles is one game), a pinball game, another sequel on the SEGA CD, and a multitude of other games with his mug on it, and not one, not two, but three cartoons. But many will always remember when Sonic was almost the king of platform games back during the 16-bit era.