Editor’s Note: Since Kotaku’s Richard Eisenbeis published an article relating to this topic, I figured I’d go ahead and finish this one off. I wrote this back in September, with the last revision being on Sep. 29. It was all written, but I lost interest in wanting to publish it. But now the topic’s flared up again, and I got back the motivation to publish it. Consider this an expansion of that article.

Some of you may already be aware of the fact that Japan and The West press different buttons to confirm or cancel when using a Playstation controller. So to those people, you probably don’t need to read this, but stick around for the end. As for everyone else, I’ll provide you with an explanation as to why the X and Circle buttons serve different purposes in Japan and The West. For the purpose of this article, X is “X“, and Circle is “O“. Now I know there are many gamers out there that play import games from Japan. Some of them are new to it and are still having trouble adapting to pressing circle for nearly everything menu based. Some of you probably don’t play import games, but encountered the Japanese Button Configuration in games that forgot to change it (like Xenosaga). Some could probably just brush it off as just something weird that Japan does (which is nothing new). But there is a deeper explanation as to why the X and O buttons are configured that way in Japan and why it’s different The West, and we may have Nintendo to thank for that.

You probably have studied either Japanese Culture or Japanese Language at some point in your life. So to you, you probably already deduced that in Japan, O means “Right” and X means “Wrong.” So it makes sense that the Confirm button in Japan is O and the Cancel button is X. But what of a place like the U.S.? While X is universally recognized as “Wrong” regardless of region, X can also be used in documents where you have to “check” something off (like if you’re male or female), or to indicate where to sign. Heck, you could even attribute it to the “X Marks the Spot” saying on any story involving a treasure map. So in that sense, X can be your “I choose/am this” mark, thus our “Confirm” button. But what of our O button? It doesn’t really have much meaning outside of just being a simple shape, but it can be interpreted as a zero (like when you’re taking a test where questions have point values and the teacher/professor indicates how many point you’re awarded).

If that’s the case, then why wasn’t the O button simply moved to where the X button is in Japan, and/or vice versa? We may have Nintendo to thank for that. When Nintendo introduced the SNES, they added the X and Y buttons to the A and B buttons. This four-face-button layout would become the standard for most major consoles after this. For the Super Nintendo, the A button was confirm and B was cancel (or if you want to be cute, Accept and Back). This was universal for all regions. Now look at the SNES’ A and B buttons, where’s they’re located, and what they do. Now look at the Playstation’s X and O buttons, where they’re located, and what they did in Japan. It’s the same thing, the only difference here is what the buttons are called. So it made sense for Sony so stick to what was familiar at the time (I mean, they did work with Nintendo after all, and look how that turned out). Heck, even the designer for the Playstation was going to go with a controller design similar to the SNES’ controller before being told to add the grip-handles.

But why shapes then? Teiyu Goto, the engineer responsible for designing the controller, explained in a 1UP article that he wanted to use shapes for the face buttons, rather than letters since it would be recognized regardless of region. He also explains the meaning of the buttons (like the aforementioned X=Wrong, O=Right), Triangle being viewpoint and Square being for menus since it looked like a piece of paper (though Triangle ended up getting that job). He also explained that the coloration of the buttons were also attached to the meaning of the shapes. So one could think Red = Hot, you’re on the money, and Blue = Cold, nothing is there. 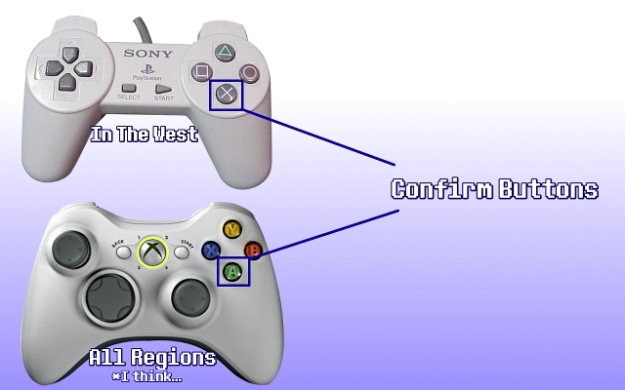 Looking at today, we can see the influence of having the X button being the confirmation button with the Xbox and Xbox 360 controllers. Their face button layout is really just the Nintendo buttons reversed. But looking at the A button, it is in the same spot where the Playstation X button would be. So in a sense we can see the culmination of western sensibilities and the sort of human condition of “Pressing ‘A’ To Start” all wrapped up in the Xbox(360)’s choice of buttons and layout. Even their colors lend themselves to representing confirm or cancel, with Green=Go, Red=Stop. A bit more logical than was Goto was going for.

So to wrap things up, Sony’s decision on button layout and function could pretty much be attributed to Sony’s unfamiliarity with videogames at the time and simply stuck to what was culturally relevant and what was considered the norm during the age of the SNES. As I said before, this may have already seemed obvious to some gamers out there, but I felt I should probably inform those that haven’t figured it out yet (or are annoyed at pressing X and going back for some reason). So do not fault Japan for simply being weird (again) as it makes sense why Sony did what they did. Besides, what button do you press when playing with the Wii Classic Controller?

… Okay, besides the + button you wiseass.