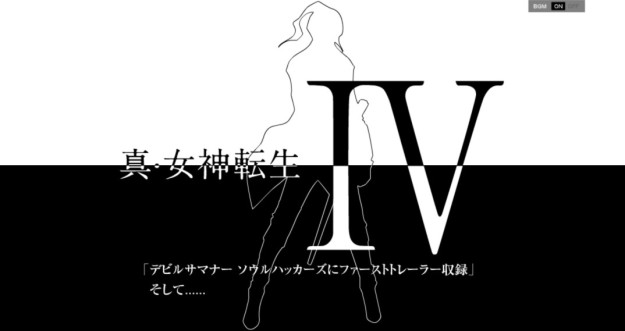 Fresh off the leak of the the Shin Megami Tensei IV trailer, Atlus updated the website for the game. Instead of a shot of the city and somber music, we now have black and white background with an outlined silhouette of what could be the main character. As Siliconera points out, the bottom of the image says, in Japanese, that Devil Summoner Soul Hackers will contain the first trailer for SMT IV, with then concludes with “And then…” What could this point out to? More info on the game when the 3DS port/remake Soul Hackers is released? Maybe a direct link to Soul Hackers and SMT IV?

Who knows. but for now, let’s enjoy that awesome music on the website now. I wanna say it’s Shouji Meguro (since he took over all composing duties for the MegaTen franchise since Nocturne), but this doesn’t sound like the band/soundset he usually works with. One thing’s for sure, if this game’s gonna have music like this, it’s gonna be a hardhitting and atmospheric soundtrack.