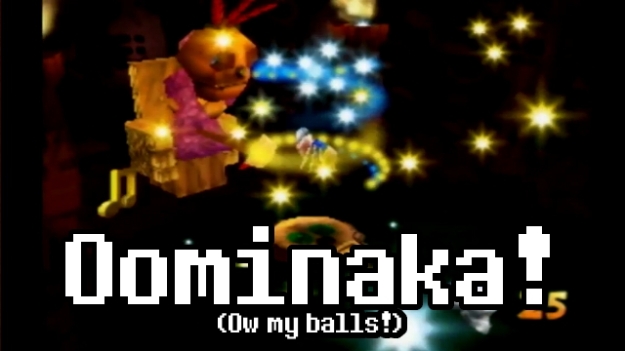 Yes, you read that right. Balls. Let’s talk about Grant Kirkhope’s balls today. Sorry if this is really late for some, but I just saw this episode some days ago. So then, in a recent episode of Game Grumps — a collab between JonTron and Egoraptor — they had former Rare composer Grant Kirkhope on as a guest as they played a selection of N64 games he worked on. Along with composing music, Kirkhope also did the sound design for some of these games, including some voice work as well.

Many know Mumbo Jumbo from Banjo-Kazooie. With Mumbo Jumbo, much of his spoken lines were generated randomly on a syllable by syllable basis, picking from a pool of samples for him. “Ikambokem” was one such line that was formed from this randomization. Some were also full, used for specific actions performed by Mumbo. “Oominaka” is the line spoken by Mumbo when he transforms you into a bug. It’s this line that Kirkhope focuses on when telling his funny as hell story about his swollen left testicle.

“Knackers… in the U.K., is slang for balls,” He states. “At the time… my left testicle was swollen up. So I had to go to the fuckin’ doctors to see about it. It’s a bit of a long story.” And it is. In short, “Oominaka” is actually Grant saying “ooh, me knackers,” or “ow, my balls.” Needless to say, it’s pretty damn funny! You can hear him talk about his balls around the 8:38 mark.

Grant divulges a whole lot more info on his past work throughout the episode, like his work on GoldenEye, Donkey Kong 64, and Conker’s Bad Fur Day. Pretty interesting stuff. So go watch the video if you’re curious. Even if you can’t really stand Jon or Egoraptor, it’s worth watching just for Grant Kirkhope.